August 2, 2022, 6:17 PM · As I noted in my previous article about our visit to Six Flags Fiesta Texas, it’s been nearly 17 years since we’ve been to the San Antonio area, and that includes visiting SeaWorld San Antonio. When I think of SeaWorld, I think about the original park in San Diego and its uber-popular sister park in Orlando. I even think about the old SeaWorld Ohio before I think about this Texas park, even though San Antonio’s heavier focus on thrill rides has become the model for how SeaWorld parks have operated over the past 10 years – by deemphasizing their animal shows and habitats that the parks used to be based upon.

Even though it’s been a long time since I’ve visited this park, the overall look and feel of the park hasn’t changed much. The entry portal still consists of giant block arches with stained-glass accents. 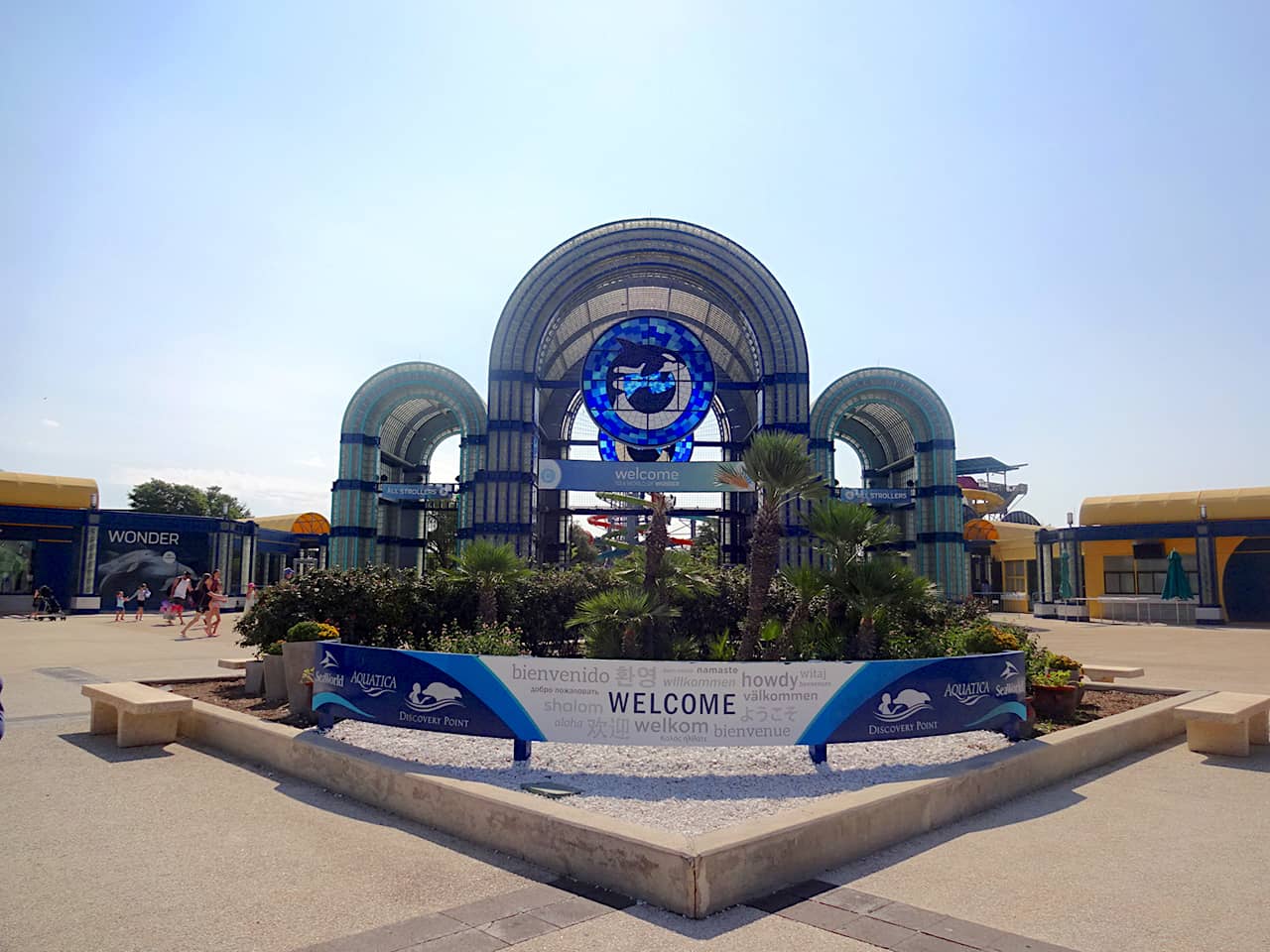 It’s quite a grand entrance for what is a relatively minor park. What has changed since our last visit is that SeaWorld has added an Aquatica waterpark and separated some of the park’s animal exhibits into Discovery Point. While Aquatica is a separately ticketed admission, Discovery Point is included in a SeaWorld admission (or annual pass/membership) despite the name being similar to Orlando’s Discovery Cove that operates as a separate gate. It’s a bit of an odd setup, because some of the animal exhibits (Turtle Reef, Pacific Point Preserve, and Penguin Encounter) are found the main section of the park, while Explorer’s Reef and Dolphin Lagoon are found in Discovery Point.

In the main part of the park, there’s vast open space between attractions and show amphitheaters, and a giant lagoon in the center of the park that is grossly underutilized. SeaWorld has done a good job of spreading attractions around the entirety of the lagoon, so while there are big gaps between rides, there aren’t as many dead zones I recall from our previous visit when park only had 3 big rides (Great White, Electric Eel, and Journey to Atlantis).

The park’s newest ride, Tidal Surge, opened earlier this year, and is an S&S “Screamin’ Swing”. The pneumatically powered giant swing ride is the largest of its type in the world (a bit taller than Skyhawk at Cedar Point), and the placement of the attraction on the edge of the park’s lagoon really intensifies the visuals while riding. SeaWorld added some reef-like accents to the structure, but there’s no other thematic elements on the attraction. The ride itself is a blast and has a high thrill factor without being overly intense. 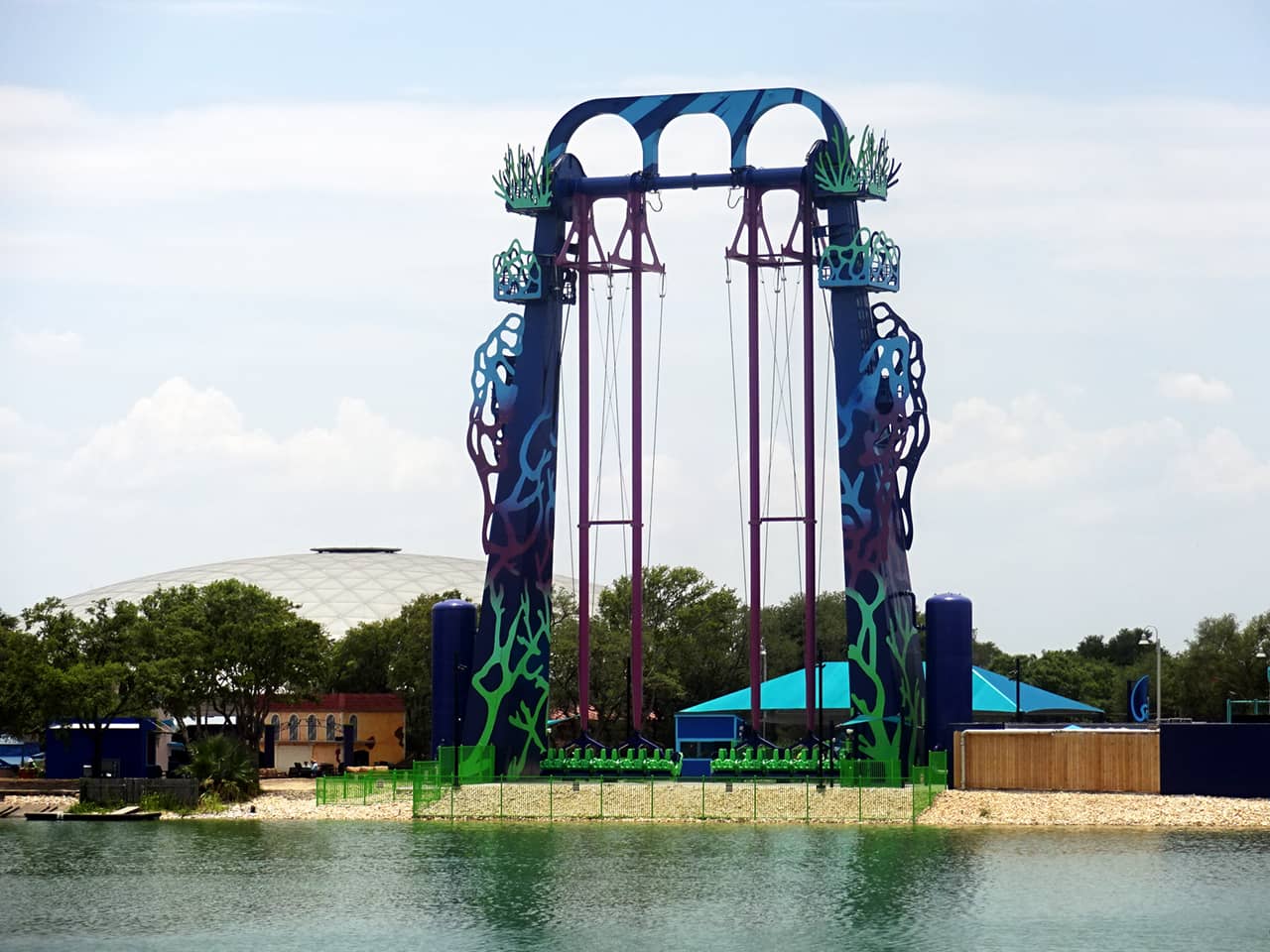 Next to Tidal Surge is Journey to Atlantis. This version of an attraction you will also find in Orlando and San Diego is by far the least interesting and sparsely themed of the bunch. It’s better than your run-of-the-mill shoot-the-chutes attraction, but the versions of the attraction in Florida and California have set a bar that San Antonio’s attraction simply cannot come close to matching. The ride starts with a slow chain lift to the top of a structure. At the top, the boat slowly spins on a turntable before being pushed backwards on a coaster-like track to a second turntable, where the boat is turned forward and plunged into a splashdown. The coaster section here is pretty pointless, and probably would be more thrilling if boats went forwards between the turntables. At least the splash at the bottom is refreshing on a hot day, but that’s about the extent of the usefulness of this attraction. 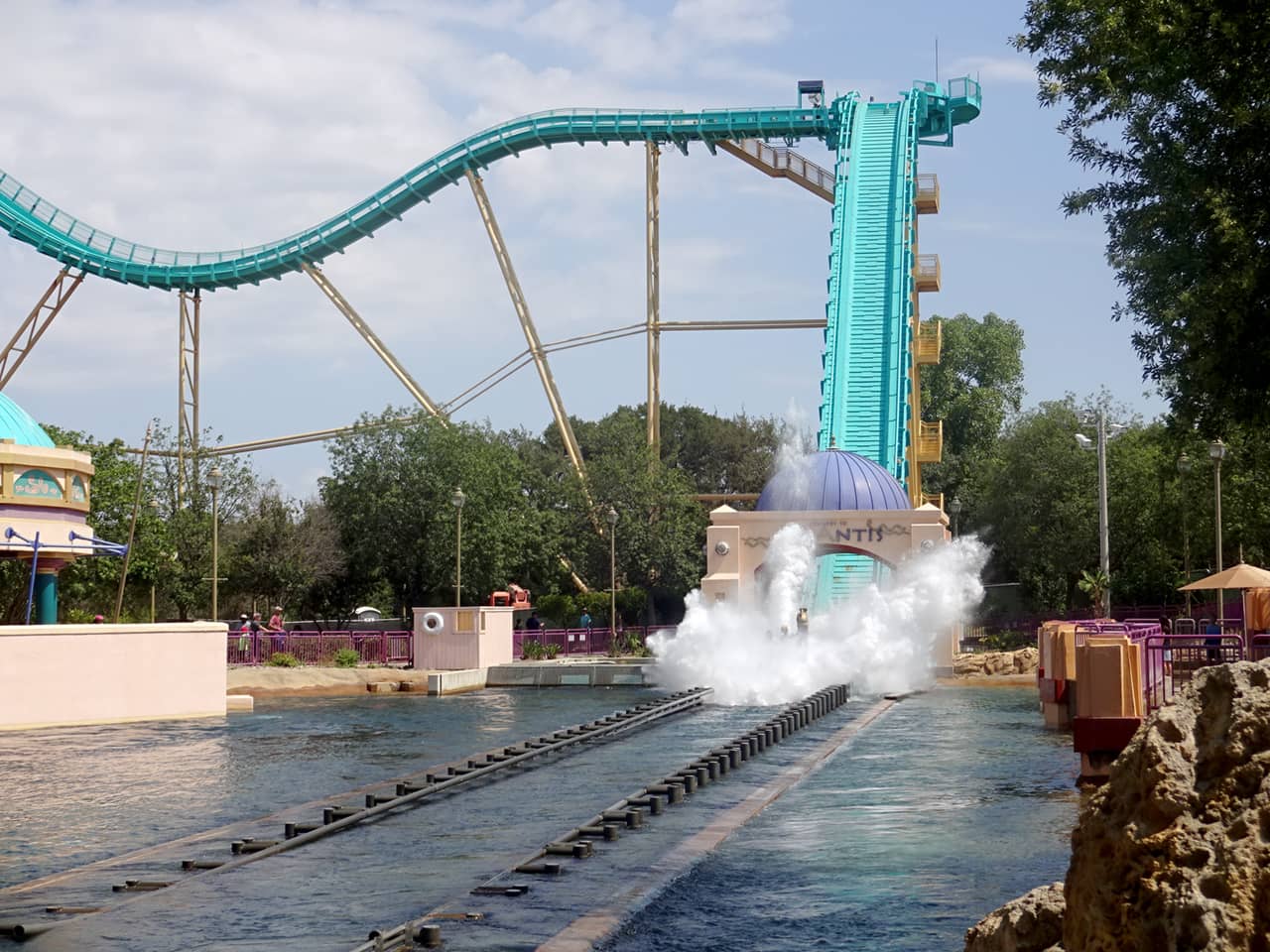 As you walk counterclockwise around the park, there is another group of attractions highlighted by SeaWorld’s newest roller coaster, Texas Stingray. This GCI creation has a lot in common with Mystic Timbers at Kings Island and Invadr at Busch Gardens Williamsburg. The trains are extremely comfortable with simple lap bar restraints and ample padding. The wooden coaster utilizes steel supports with smooth and well-profiled wooden tracks to deliver a thrilling ride. Texas Stingray is billed as the tallest and fastest wooden roller coaster in Texas, but that’s not saying much when the coaster only has a 100-foot first drop with 55 MPH top speeds – comparatively New Texas Giant with its wooden supports and steel track has a 149-foot first drop with 65 MPH top speeds. Texas Stingray makes up for those lesser stats with plenty of airtime, lots of twists and turns, and a smooth ride. It’s not quite as good as Mystic Timbers, but it’s a bit better than Invadr. 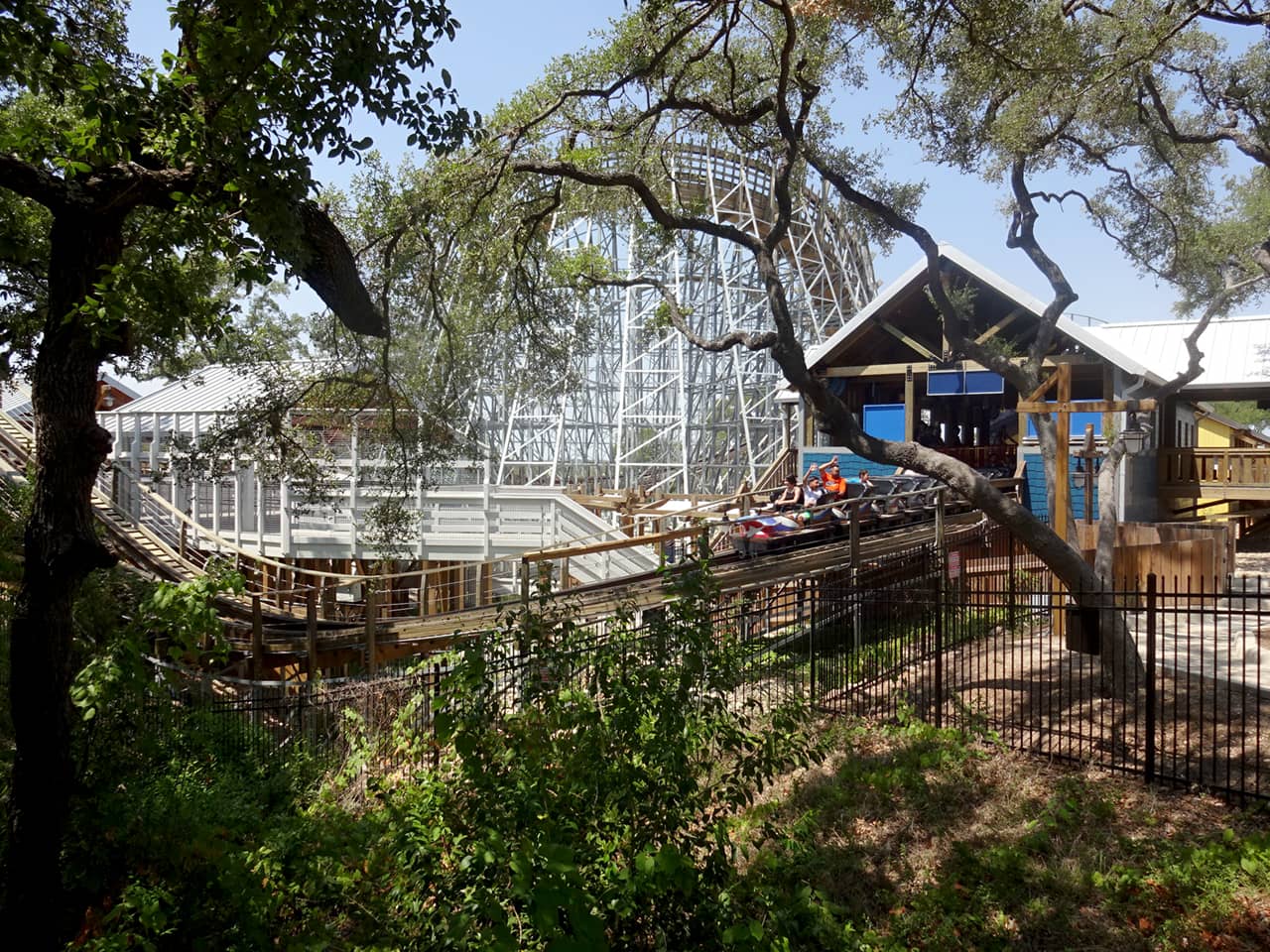 Across from Texas Stingray is Turtle Reef and a pair of flat rides, Riptide Rescue and Sea Swinger. Turtle Reef is a small animal exhibit featuring a medium-sized aquarium housing sea turtles. 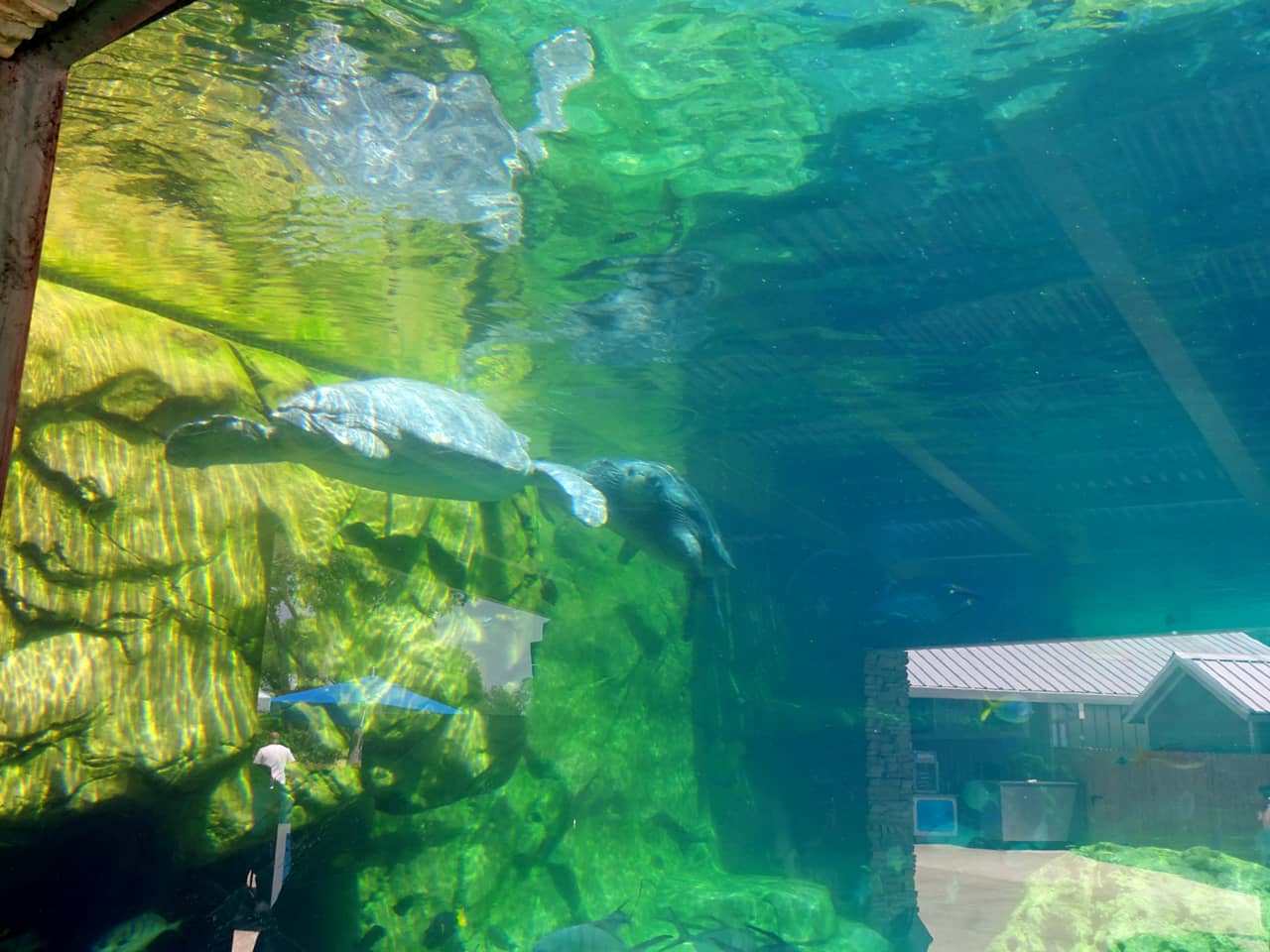 Compared to San Diego and Orlando, this is a very small animal exhibit, and the aquarium itself has limited views. However, both Sea Swinger and Riptide Rescue are decent flat rides. 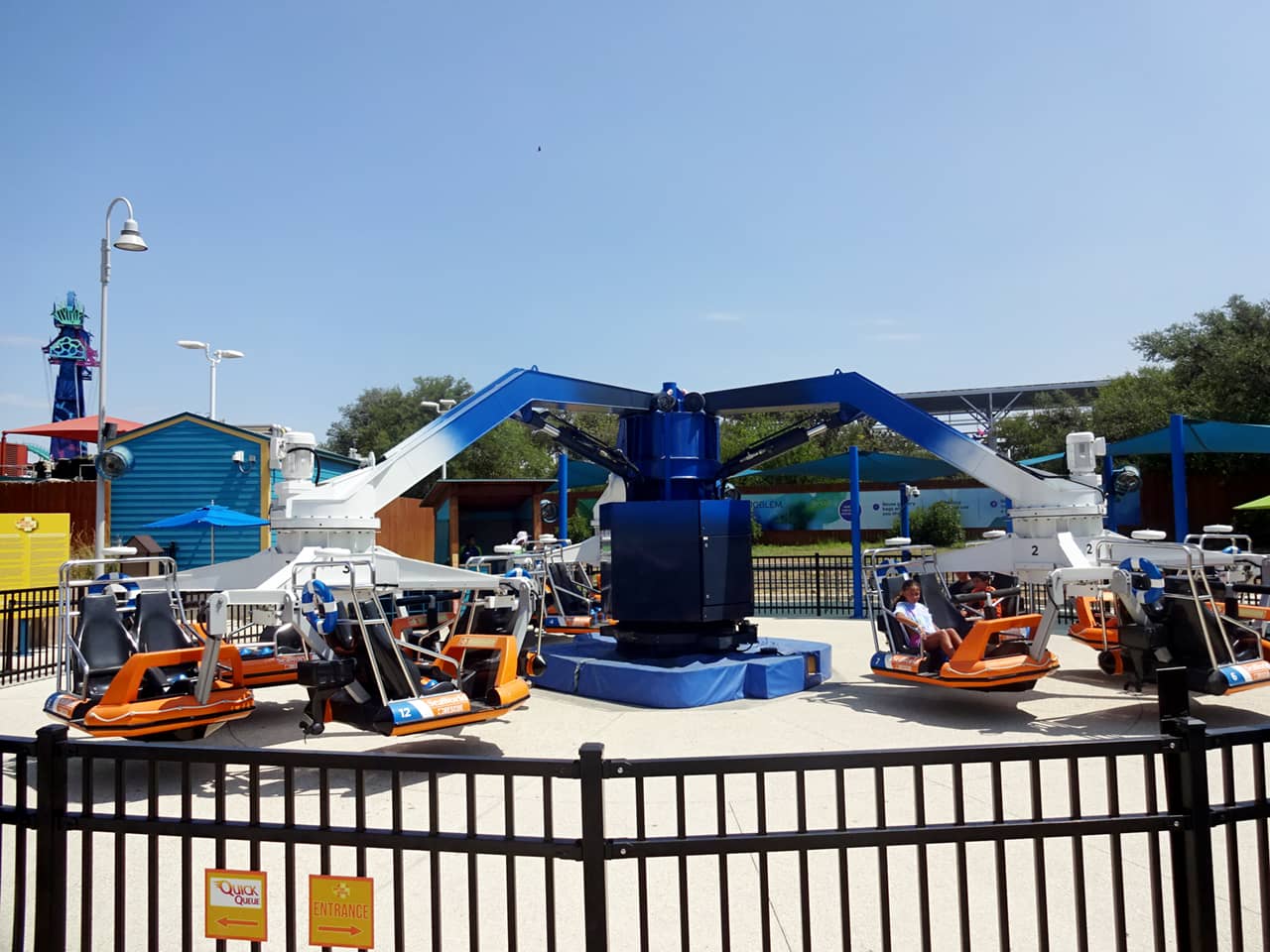 I was actually pretty impressed with Sea Swinger, which looks like a relatively small spinning pendulum, but packs a punch given its size compared to the giant spinning pendulums you find at Six Flags and Cedar Fair parks. 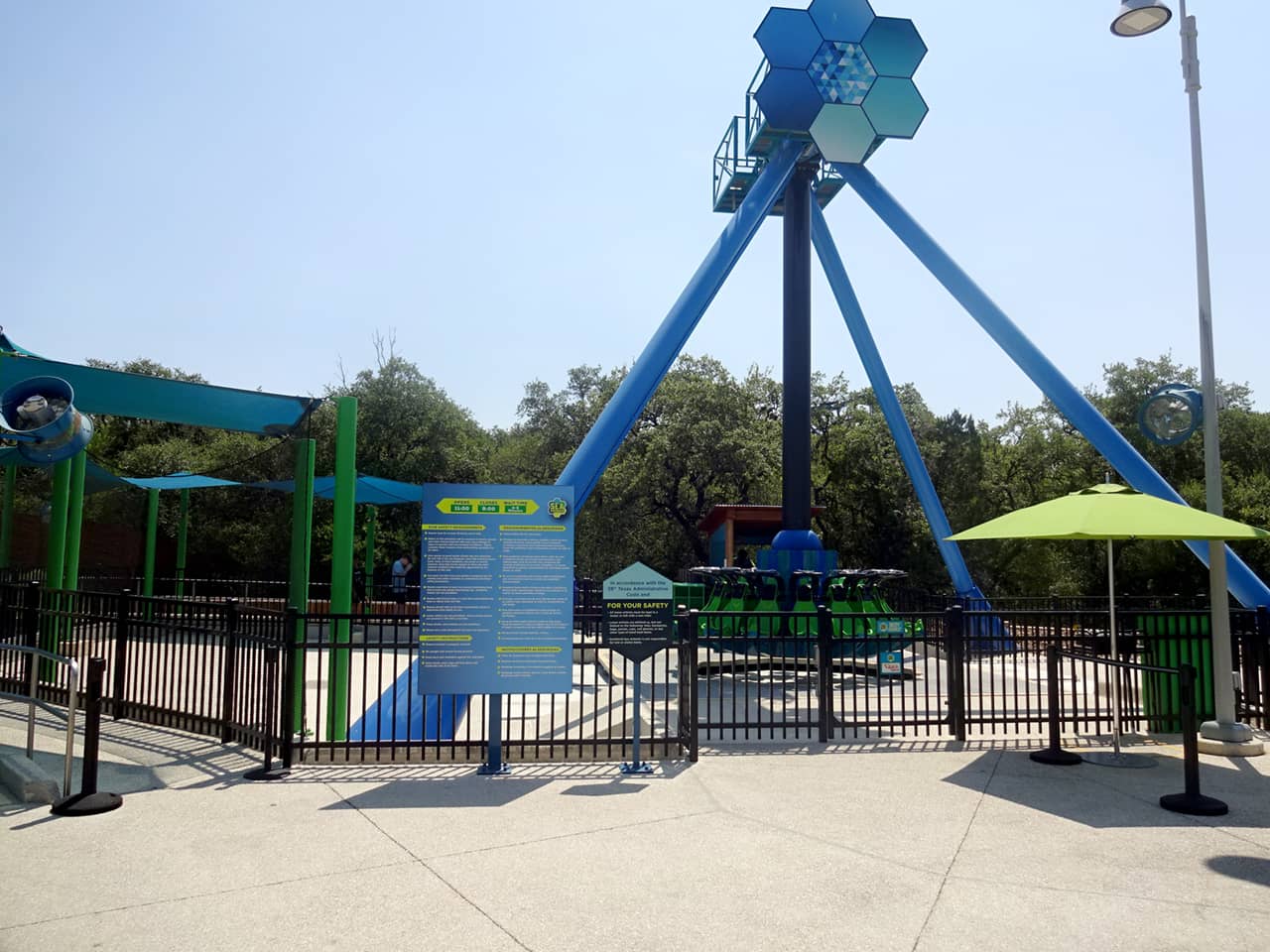 Further around the back side of the park is Rio Loco, a raft ride that does an excellent job of soaking riders along its meandering course of whitewater rapids. The theming here is even less prevalent than Journey to Atlantis, but the ride achieves its primary goal of cooling guests off. Next to Rio Loco is Great White, the 3rd B&M Batman the Ride clone we would experience on this trip. If this coaster were located in Orlando or San Diego, you’d expect the entrance or exit queue to include a walk-through of a shark tank, but the only references to the apex predator of the ocean is a Guy Harvey mural adjacent to the coaster and some cartoonish sharks painted on the bogey covers on the train. As with other versions of this coaster, Great White is an intense ride with five rapid-fire inversions, but it’s missing that extra touch of theming I expect from SeaWorld coasters that is generally lacking from many of the attractions here in San Antonio. 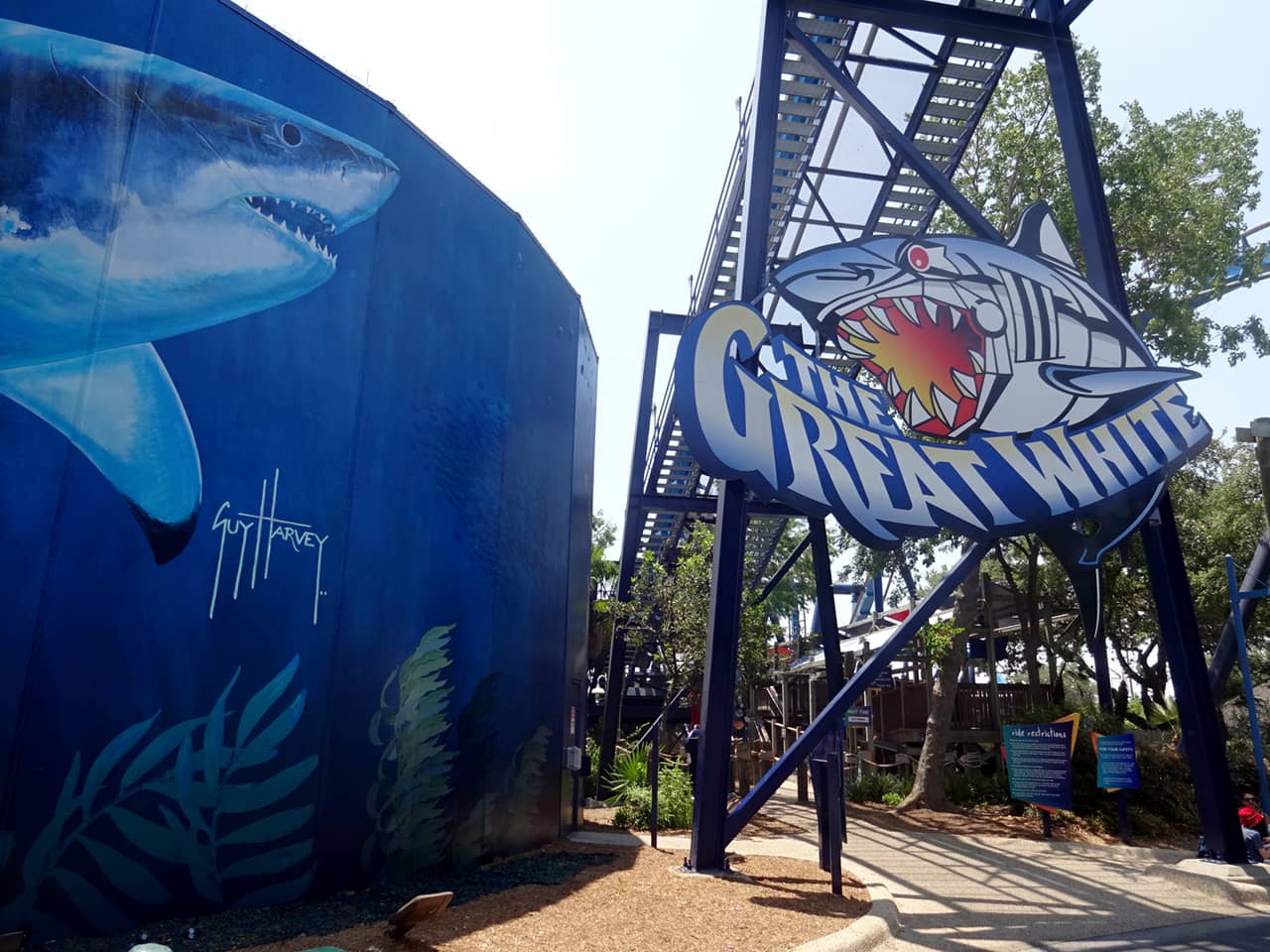 Beyond Great White is the other new roller coaster since our previous visit, Wave Breaker: The Rescue Coaster. Wave Breaker is a launching steel roller coaster from Intamin that takes riders out over the park’s lagoon on trains themed to look like Jet Skis. Overall, the coaster is decent when considering it’s billed as a family coaster. However, there are a number of aspects of this ride that could have been done so much better. The first is that riders are instructed to sit straight up in their seats, not leaning forward like you would expect to position yourself on a Jet Ski. The second downside of this coaster is that after the train leaves the station, riders enter a launch tunnel similar to the one on Manta at SeaWorld San Diego. However, aside from some soft music playing in the background, the train just stops and waits in the tunnel until it launches – there’s nothing projected on the walls, no sound effects or crescendo, just an awkward pause before the train blasts into its course. The launch itself is pretty mild, but on par with other attractions billed as family coasters. The course involves a number of twists, turns, and hills along with a second launch to power the train through the second half of the track. There’s nothing wrong with Wave Breaker, but there’s nothing special about this coaster despite the unique riding position and track layout that is predominantly over water. 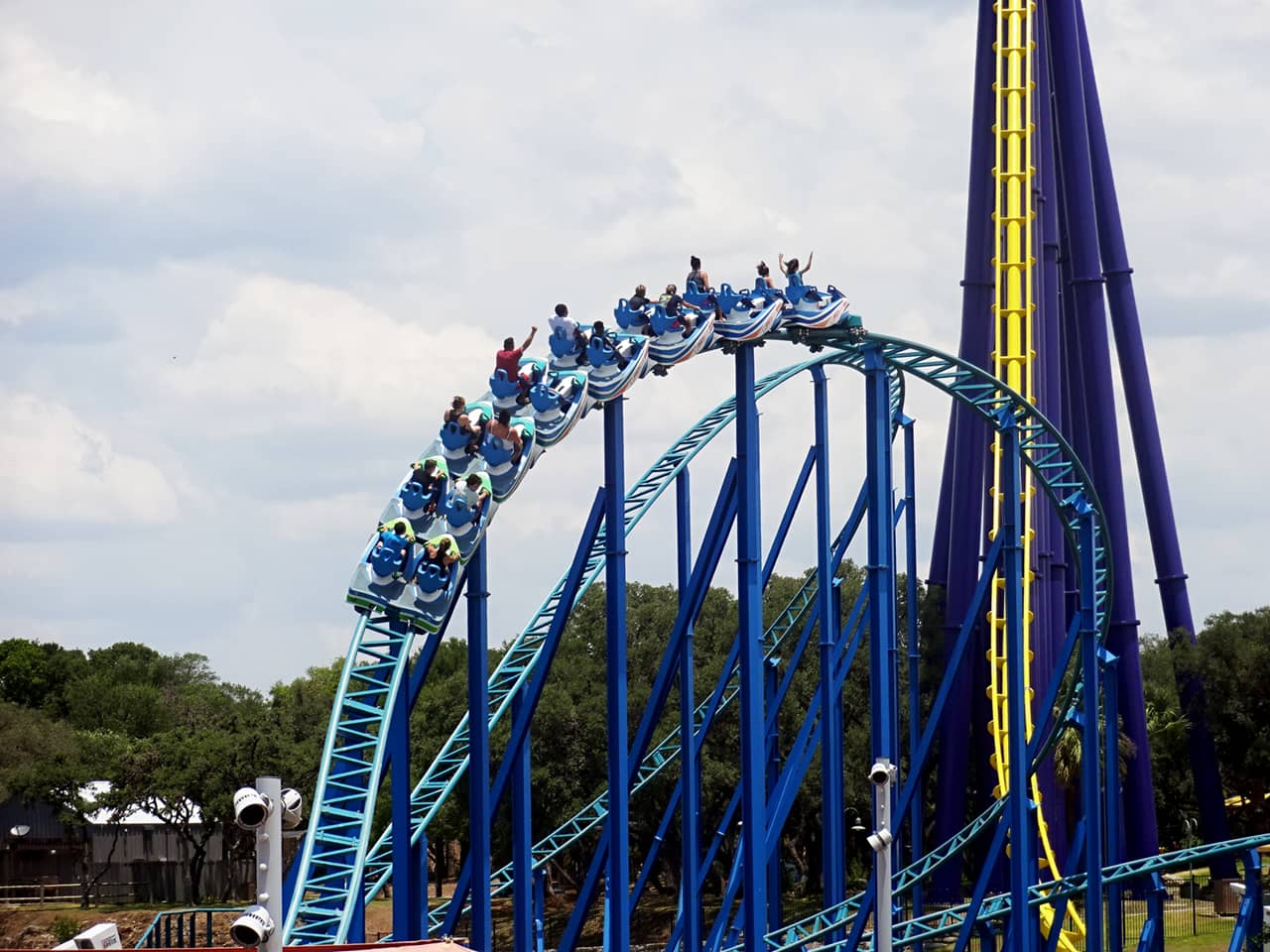 The last big ride at SeaWorld San Antonio is Steel Eel. This Morgan coaster is all about airtime with a down and back layout filled with camelback hills and bunny hops maximizing zero-g moments. At 150 feet tall, Steel Ell is a lot smaller than similar coasters around the country like Steel Force at Dorney Park (200 feet) and Wild Thing at Valleyfair (207 feet), but it delivers a very comparable ride to its bigger siblings. Even though Steel Eel is the second oldest coaster in the park (built in 1999), it still represents one of the best attractions at SeaWorld San Antonio. 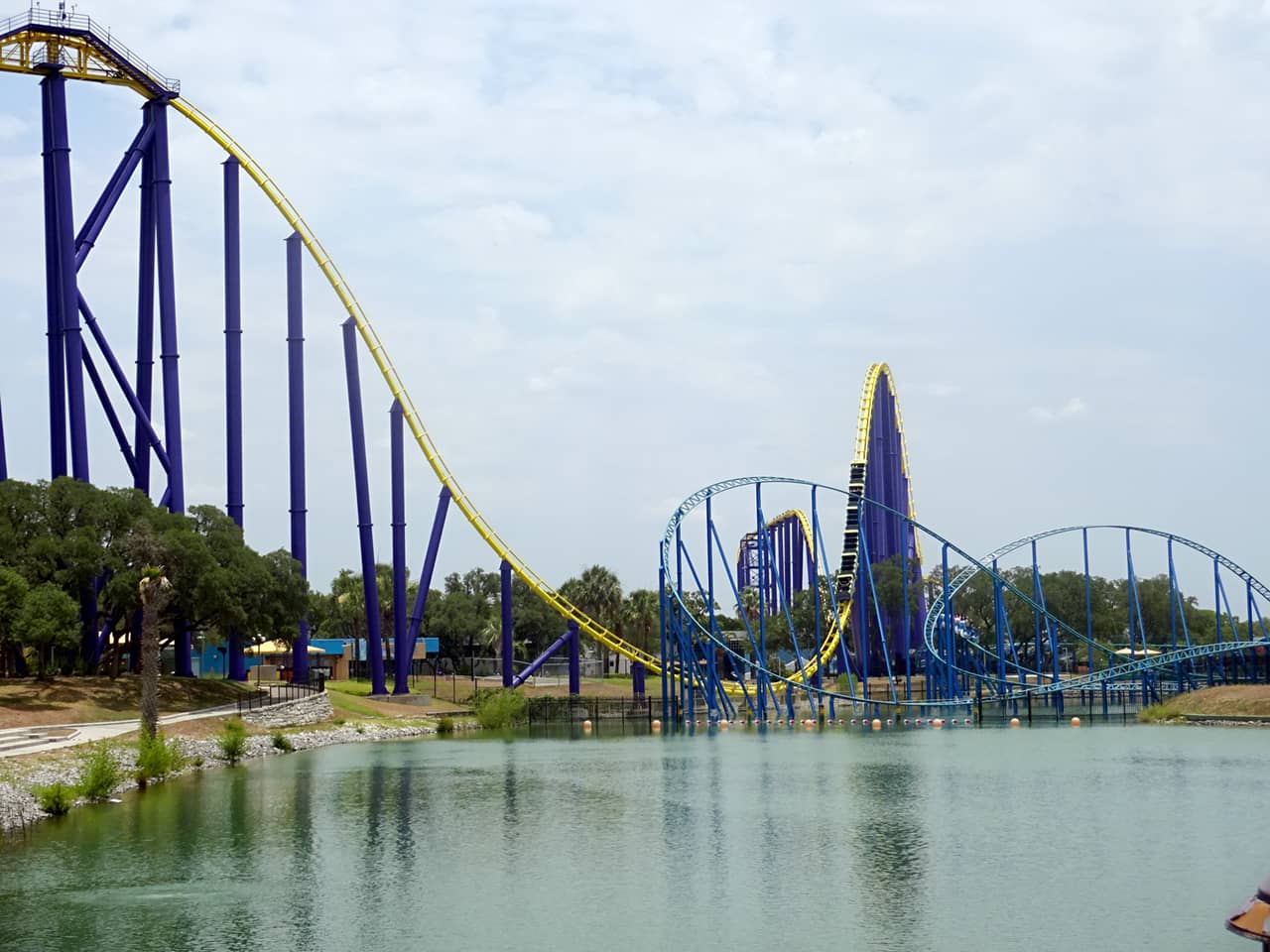 As with other SeaWorld parks, SeaWorld San Antonio has a number of animal exhibits and shows. Like the rest of the chain, there’s more of an emphasis on education these days and more homogenization between the parks’ similarly named shows. However, SeaWorld San Antonio features a show starring beluga whales and Pacific white sided dolphins, unique to this park. 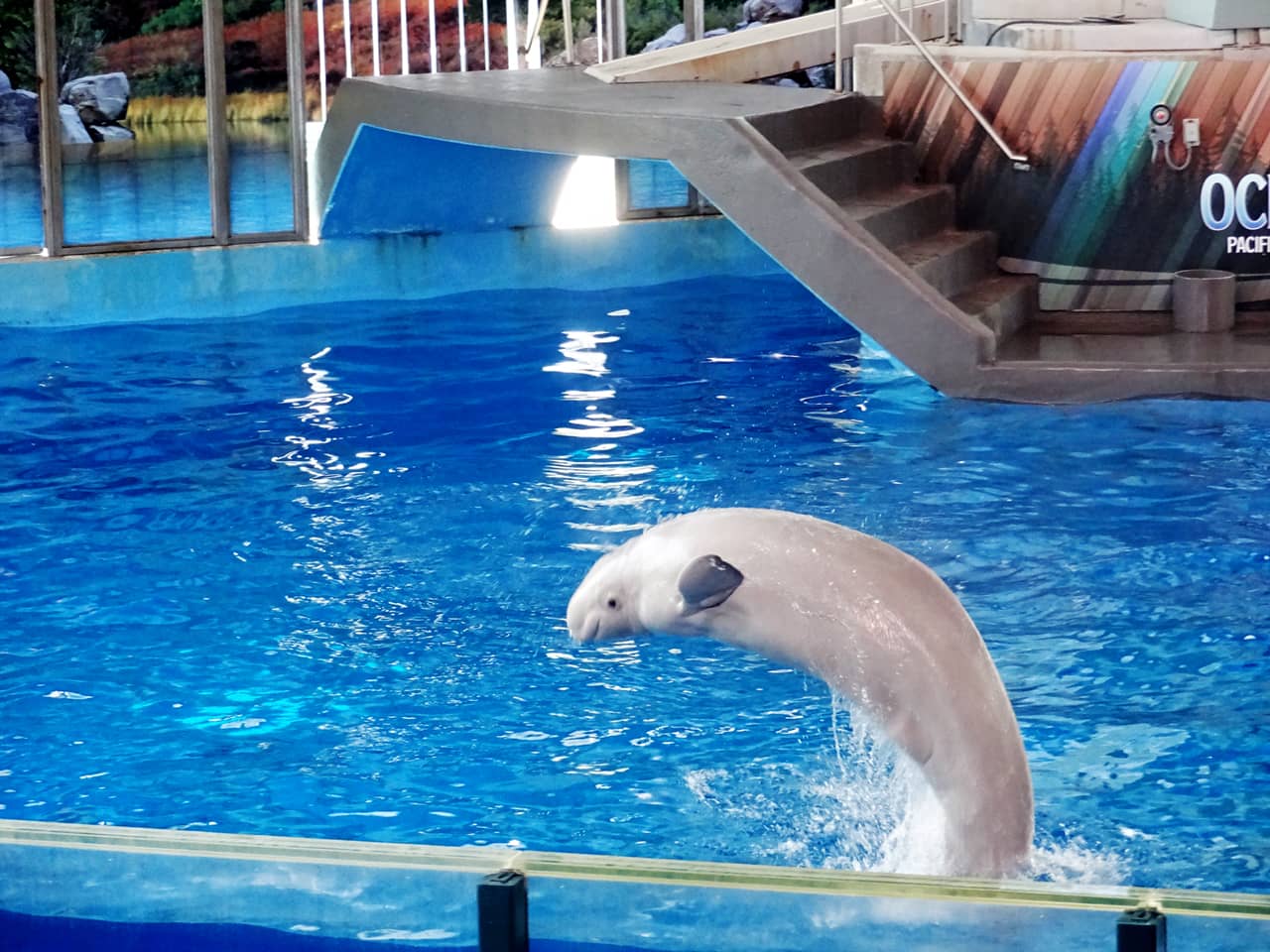 I still miss the SeaWorld shows that combined elements of Cirque and unique animal behaviors, but this show features some marine mammals I had never seen in this setting before. Pacific white sided dolphins are among the fastest and most acrobatic creatures in the ocean, and this show really features some amazing behaviors from these amazing marine mammals. 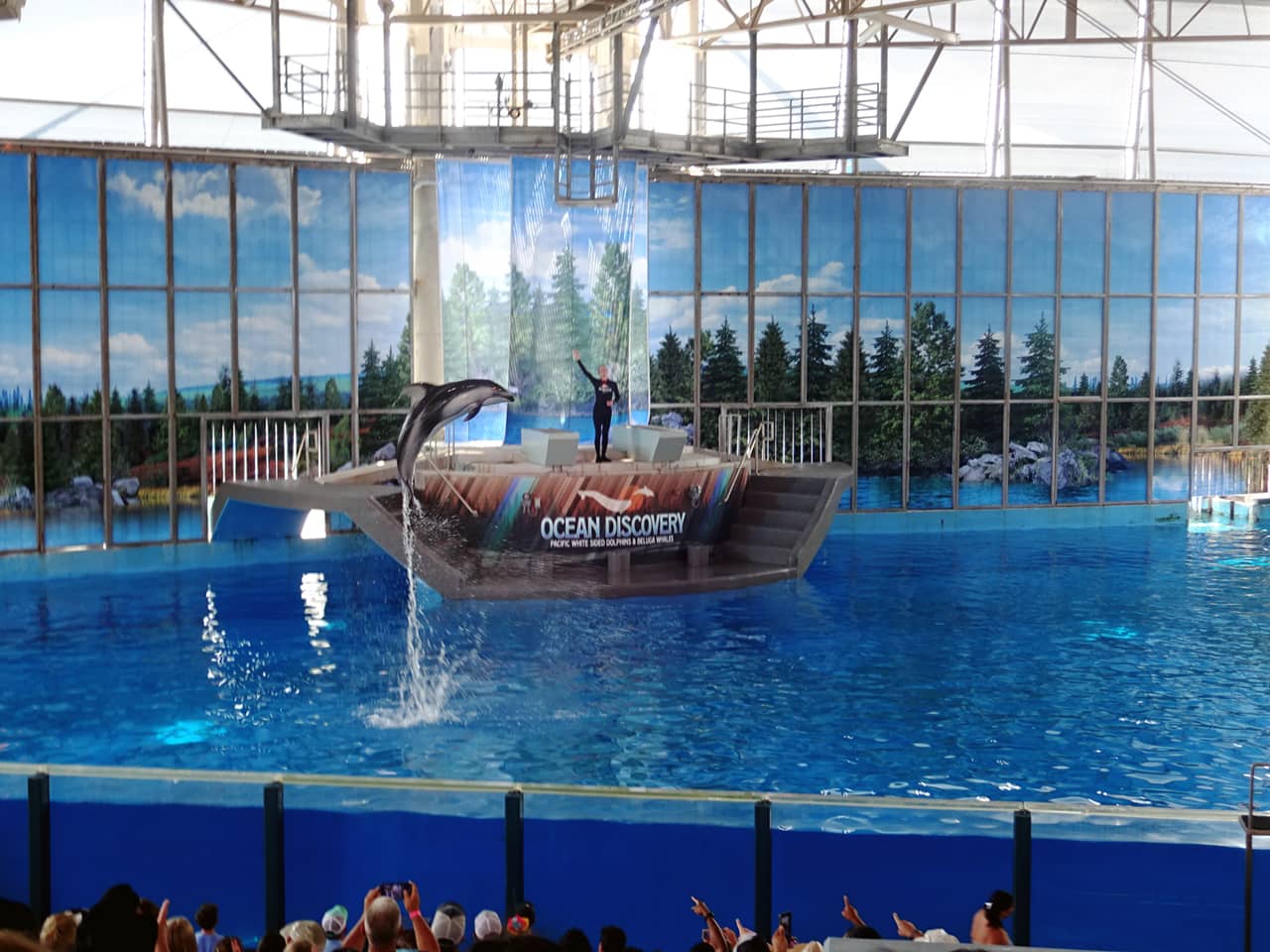 SeaWorld San Antonio also features the obligatory Orca Encounter and a Sea Lion and Otter Spotlight show (eliminating the Clyde and Seamore branding to emphasize the educational elements). The park was also running Electric Ocean during our visit, but the main show did not start until 9 PM. Due to the late showtime, we chose not to hang out for 2+ hours after we finished our day in Aquatica. Speaking of Aquatica, we did spend a few hours in SeaWorld’s waterpark, and it was very nice despite its very compact layout. The signature attraction is Stingray falls, where guests board a circular raft and plunge down and around the stingray lagoon, eventually plunging into a tunnel that features an underwater view of the stingrays. Unfortunately, the slide is the only way guests can access this underwater viewing area, and the currents force lifeguards to push rafts quickly through, so there’s not much time to look at the rays before being asked to leave the raft. Aquatica debuted a new slide for 2022, Riptide Race, which is a toboggan-style raft slide complex where guests can race down dueling slides. This looks like a water coaster, but it’s a traditional gravity-powered slide, and the racing elements are fun, but very brief as raft zip past open sections where you can quickly glimpse the raft in the adjacent slide. The rest of Aquatica contains the typical slides, splash pads, lazy river, and wave pool you’d expect to see in most water parks. There weren’t any other slides or attractions that were particularly notable, but it was nice to have attractions packed so close to each other to limit walking. Orlando’s Aquatica is definitely superior to the San Antonio waterpark, but the Texas park doesn’t have to compete with Disney’s waterparks and Volcano Bay.

In general, SeaWorld San Antonio is a nice park, but lags behind the other parks in the chain. The newest coasters (Wave Breaker and Texas Stingray) are good additions to the lineup but are not as good as recent additions to Six Flags Fiesta Texas. As SeaWorld has changed their show offerings to focus more on education, the entertainment appeal has been diminished. Aquatica is a really nice addition but is reasonably comparable to SFFT’s White Water Bay even though SeaWorld’s water park requires a separate admission while SFFT’s water park is included with theme park admission. I recall our previous visit to this park as the template for what all the SeaWorld parks should be like. SeaWorld has since applied a similar philosophy to their other parks, but unfortunately the chain has not committed the same resources in San Antonio that they have in San Diego and Orlando. That has resulted in San Antonio falling behind and feeling substandard, particularly with a serious coaster park like SFFT less than 20 minutes away. 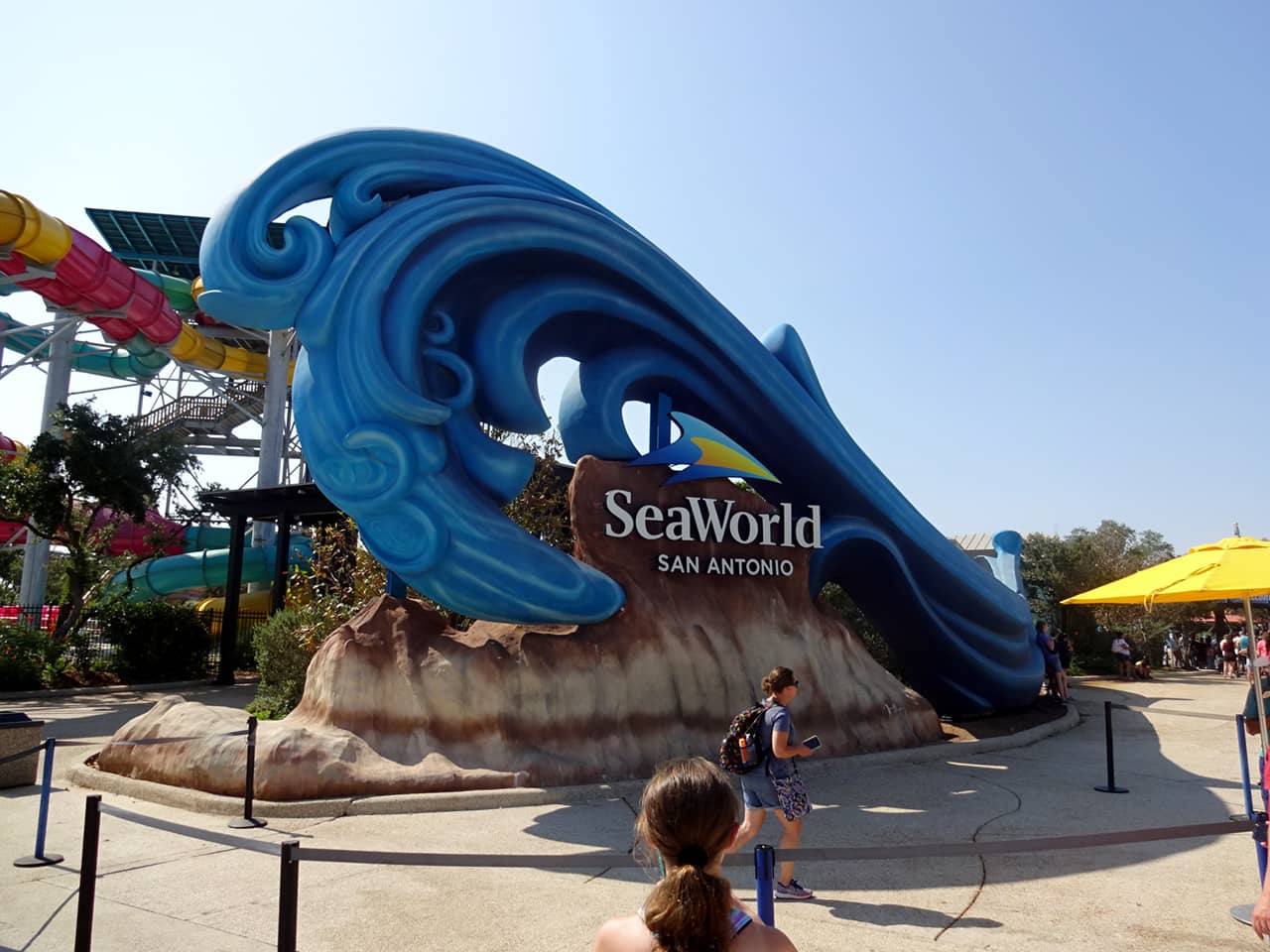 And to help support Theme Park Insider through the purchase of discounted attraction tickets, our travel partner has a three-day ticket deal to SeaWorld San Antonio starting at just $83 per person.