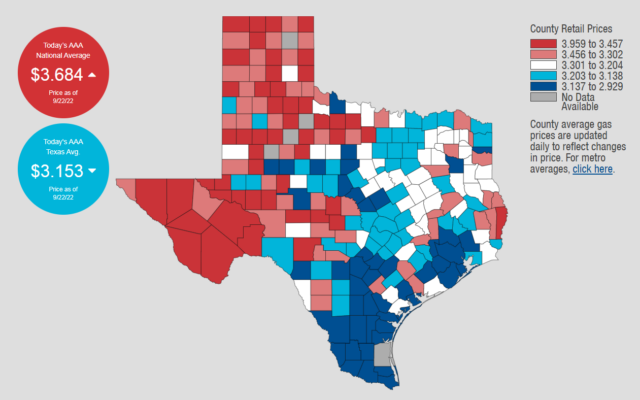 SAN ANTONIO (KTSA News) — AAA Texas is reporting another drop in the average price of regular unleaded gas in Texas, but there is no change for drivers in San Antonio over the last week.

The Texas average sits at $3.15 per gallon, a three-cent drop from this time last week and still 33 cents more than what Texans were paying a year ago.

“The statewide gas price average for Texas has been on the decline for three months,” said AAA Texas spokesperson Daniel Armbruster. “Retail gas price fluctuations remain possible due to Russia’s war in Ukraine as well as increasing hurricane activity.”

The San Antonio average price for unleaded is $3.08, which is the same price posted a week ago today, but still 41 cents higher than the $2.67 local drivers were paying a year ago at this time. 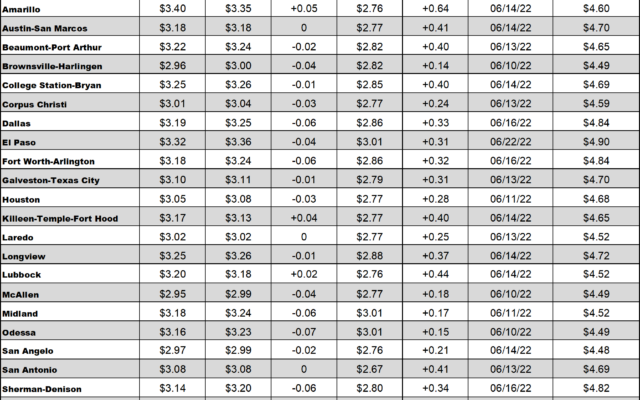 Drivers in McAllen and other parts of the Rio Grande Valley have the cheapest gas at $2.95 per gallon. The most expensive gas in Texas is in Amarillo, where drivers are paying an average of $3.40 per gallon for regular unleaded.

Drivers in Texas are paying the fourth lowest gas price average in the country, while drivers in California are paying the most at $5.52 on average for a gallon of regular unleaded.

According to AAA, the national average price for a gallon of regular unleaded is $3.68, which is two cents less when compared to this day last week and 49 cents more than the price per gallon at this same time last year.