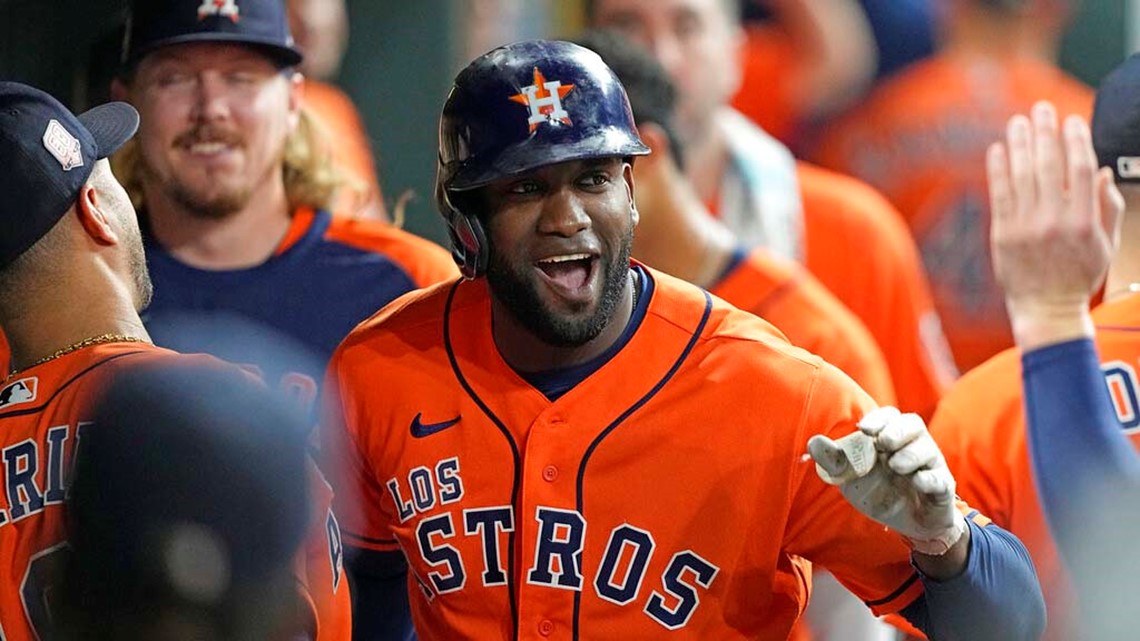 The Houston Astros clinched a postseason berth with a 5-0 win over the Oakland Athletics on Friday night.

DETROIT — Yordan Alvarez homered in his first three at-bats, Justin Verlander threw five hitless innings in his return from the injured list and the Houston Astros clinched a postseason berth with a 5-0 win over the Oakland Athletics on Friday night.

Alvarez, second in the AL with 36 home runs, had solo shots off Adrián Martínez in the first, third and fifth innings. He capped his big night with a single in the seventh to tie his career high with four hits.

It is his second three-homer game and first since Aug. 10, 2019, a season when he won AL Rookie of the Year. There have been only 15 three-homer games in Houston history and Alvarez joins Glenn Davis and Jeff Bagwell as the only Astros to have more than one.

Verlander (17-3) didn’t miss a beat in his return after injuring a calf on Aug. 28. He walked one and struck out nine to extend his season-long winning streak to nine games and lower his MLB-leading ERA to 1.78.

Manager Dusty Baker said Verlander would be on a pitch-count but wouldn’t reveal what his limit was. He was lifted without giving up a hit after throwing 79 pitches.

Verlander plunked Ramon Laureano with one out in the second. He didn’t allow another baserunner until walking Seth Brown with two outs in the fourth. He then sat down the next four batters he faced to end his night.

Phil Maton took over for the sixth and Nick Allen singled on his first pitch to break up the no-hit bid.

There were two outs in the first when Alvarez connected on a shot to straightaway center field to make it 1-0.

Alvarez’s second homer came with two outs in the third to extend the lead to 2-0.

Jeremy Peña hit his 18th homer to left field with one out in the fifth. The Astros went back-to-back when Alvarez sent the next pitch from Martinez into center field to extend the lead to 4-0 and send Houston’s dugout and the crowd into a frenzy.

Martínez (4-5) pitched five innings, walking three and the only hits he allowed were the four homers, which were a career-high.

The Athletics, who have baseball’s worst record at 52-93, managed just three singles and tied a season high by striking out 16 times.

Athletics: LHP Sam Moll was placed on the 15-day IL with a strained left shoulder and LHP Jared Koenig was recalled from Triple-A Las Vegas.

Astros: RHP Seth Martinez was optioned to Triple-A Sugar Land to make room for Verlander. … RHP Josh James was recalled from his rehabilitation assignment because of forearm discomfort.