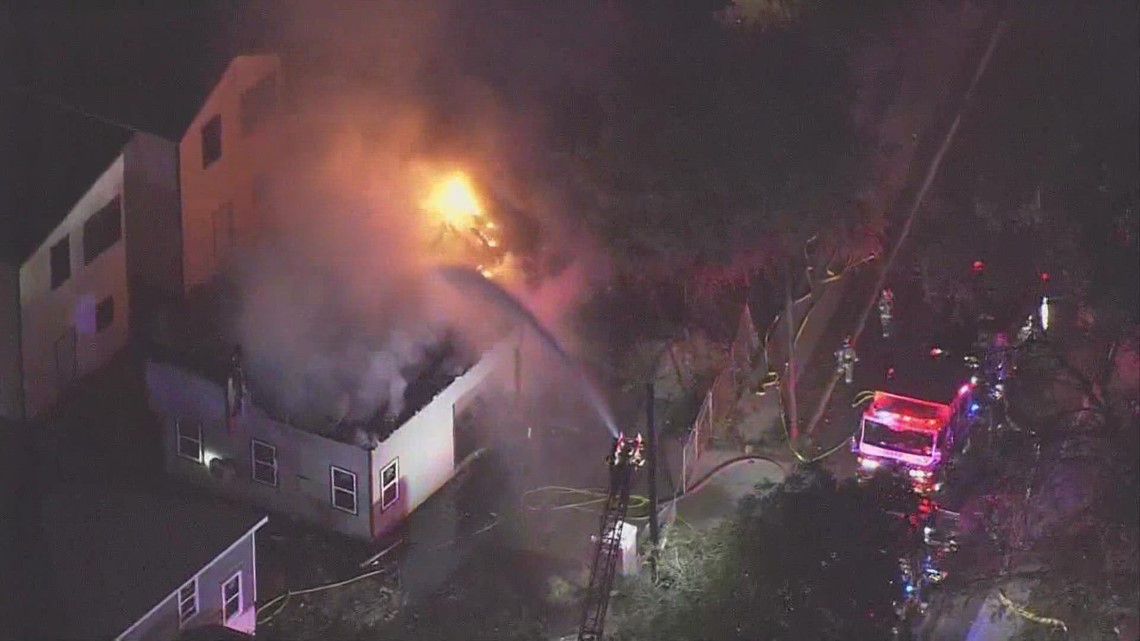 SAN ANTONIO — It was just before 10 p.m. Wednesday when the call for help came from the 1100 block of Aransas in east San Antonio.

The fire incident commander who responded said as soon as they left the driveway of the fire station, he saw smoke and flames in the distance and immediately called for more resources.

Upon arrival, firefighters were greeted by a blast furnace of flames coming from a new home still under construction.

The house is one of many being built on a large lot that used to be home to an aging and problematic mobile home park at the corner of Gevers. The development features homes with about 20 feet of separation, so the first concern of firefighters was to keep the flames from spreading to adjacent structures.

As they worked their way around the burning building, a woman was found on the ground behind the home, curled in a fetal position.

Firefighters immediately moved her to safety, saying she was not harmed, but she was detained as the investigation progressed.

Once firefighters brought the initial home under control, they searched nearby homes and found additional damage.

The incident commander said two additional homes under construction had burn marks inside, as if someone had used gasoline soaked rags to try and set interior stairways on fire.

The builder of the house, Miguel Villarreal of Evolution Electrical said “The only thing that we’ve been told so far by the fire department is that there was a lady with gasoline soaked rags.  They actually found her in the back of the house that burned,” Villarreal said, adding  “She supposedly had paper, I guess newspaper and rags she was soaking in gas, lighting it and throwing it on top of the wood.”

Villarreal said they have had trouble with night time thefts in the past, but he has no idea who the woman is or why the fires were started.

The home that burned began the day as a two story structure, but at day’s end, it had been reduced to a single floor.  The second floor had collapsed to ground level and even structural timbers supporting the building had witness marks of intense fire damage.

Villarreal said during construction his team has had a warm welcome from neighbors.

“The neighbors are actually pretty happy about us building these, so we don’t understand why someone would want to damage the whole neighborhood,” Villarreal said, adding that he believes people are happy to see lower priced but quality homes come to the area.

“The main reason why people were interested in our houses was we’re not price gouging them. We’re pricing them at what they should be, not trying to get triple what we put into it.  We’re trying to be fair with everybody in the city that’s actually looking for a house.”

Villarreal said as a 27-year-old recent first time home buyer, he believes the affordable homes his team builds answer an unmet need in the city.

“Our main priority is being able to produce a house that people can afford, but it is not a cheaply built house that’s going to fall apart ten years from now,” Villarreal said.

With a big red demolition warning sign posted on the front of his building now, Villarreal said he remains optimistic about moving forward.

He said he believes demolition on the ruined home will be underway in earnest by Friday and that they will begin rebuilding as soon as the lot has been cleared of debris.

Late Thursday a fire department spokesman provided an update saying the woman who had been questioned about the fire has not been charged, but the investigation continues.