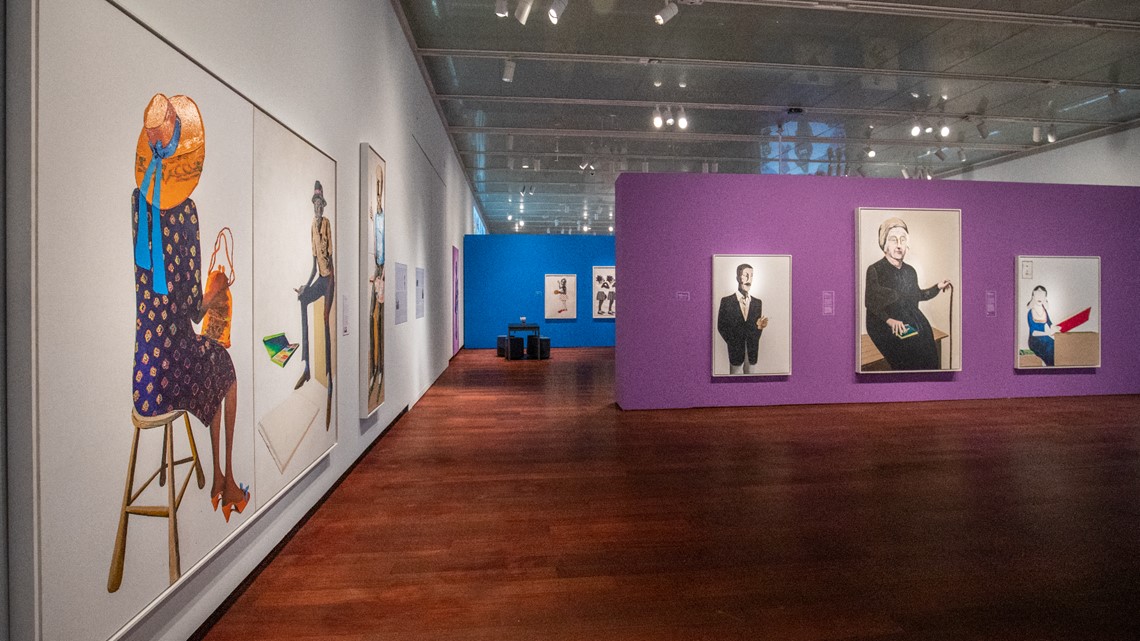 That’s why the contemporary art museum is debuting “True Believers” and “Blurring Borders” in the same space Thursday, giving visitors a double-pronged look at the artistic combination of heritage and activism.

“We have artists of color exclusively right now in this space; that’s something that’s important,” said Eddie Hayes, senior exhibitions manager at the McNay. “And that’s not coincidental. That’s intentional.”

All told, it’s actually the work of the three artists being showcased in the exhibits. “True Believers” features two creative minds in conversation with each other – Benny Andrews, who died in 2006, and Austin native Deborah Roberts – as they explore the experience of Black Americans in their collage-based works.

Roberts, in fact, has cited Andrews as a major influence. At that point, McNay staff say, pairing their art together was an obvious route to take.

“We thought this would be a great way of talking about artistic legacy and about the idea of inspiration and mentorship,” said Rene Paul Barilleaux, head of curatorial affairs at the museum. “They didn’t know each other, but there was something in the work that resonated.”

Nearly 50 pieces make up “True Believers,” ranging from portraits to surreal dioramas and even audio of a podcast in which Roberts shares a story of finally meeting her artistic idol. Both she and Andrews prioritized activism through their art, and the way the exhibit is organized spatially emphasizes the main ideals they sought to capture, sometimes in contrasting ways; namely, themes of family, community and oppression.

The biggest piece on display isn’t found in the exhibit but in the front lobby of the McNay, where it’s hung as a backdrop to welcoming visitors for the next few months. Titled “Utopia,” it’s one of several massive murals created by Andrews ahead of the American Bicentennial in 1976, motivated by telling the story of Black people in U.S. history.

In “Blurred Borders,” Mexican artist Margarita Cabrera’s mission of telling the story of immigrants in contemporary U.S. history is on full display. But unlike the more traditionally mounted “True Believers,” many of Cabrera’s featured works – 3-D depictions of desert flora created from repurposed Border Patrol uniforms – make up an exhibit whose pieces you walk between and among.

“I’m very interested in an art that is representing our surroundings, but also very much an art that is transformational, and that can transform sociopolitical settings,” Cabrera said.

Look closer Cabrera’s synthetic cacti and nopalitos and you’ll star to notice small details woven into the fabric: rudimentary depictions of families, U.S. and Mexican flags, and words like “Hope” and “Trust.” Cabrera says the details reflect the true-life accounts of migrants she’s spoken to in recent years—some who have been here for years, and some who arrived just recently.

That those stories are being told through material associated with a border security force that represents different things to different people adds layers of meaning to Cabrera’s work.

“Some people think that uniform is security, protection. There are other people that see the uniform, and it represents exclusivity or violence or aggression,” she said. “(There are) so many different perspectives working together to transform this material.”

Elsewhere in “Blurring Borders” are other works sure to make visitors do a double-take: Makeshift parrots who flutter mechanically and replicate the ambient sound of the space in real-time. The intention, Cabrera says, is to immerse visitors into the kind of digital noise that impedes productive conversation as it pertains to immigration and the border.

And adorning two of the exhibit’s walls are projected videos of San Antonians sharing their own stories of sacrifice—the final pieces to a mosaic-like exhibit that encourages visitors to consider others’ stories of struggle and adjustment.

“Grounding the work locally is so important,” said Cabrera, herself an immigrant who arrive in the U.S. as an 11-year-old girl. “It allows the community to participate… and it allows for the conversation to be honest and true and contemporary.”