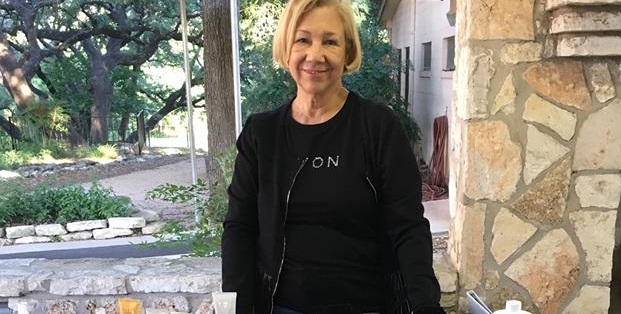 Esther Cantu still remembers Christmastime in her early teens when she used to help her mother, Josephine Perez, organize all her Avon orders.

It all started in 1955, when Perez was a licensed vocational nurse at Santa Rosa Hospital and her patients were some of her first customers. Perez sold lipsticks, lotions and other products from the famous beauty line for 60 years. She was still writing out orders — she never owned a computer  — not long before her death in 2015 at age 98.

At first selling Avon was just to bring in more income to raise Cantu and her three siblings. But soon it became a passion that paid off more in making others happy than in making extra money.

That legacy continues with Cantu, who took over her mother’s customer base after she died so she, too, could keep in touch with old friends and meet new faces to make beautiful.

“She gave away more than she sold,” Cantu said. “I think it was more the pleasure of seeing people enjoy the product.”

For more than 135 years, Avon has been calling enterprising women to sell and spread the gospel of its cosmetics, fragrances and skin-care products to generations of comadres and coworkers, family members and fellow moms, housewives and any other discerning women who’d rather have the beauty counter come to them.

And few cities reflect the brand’s enduring legacy quite like San Antonio.

On ExpressNews.com: Luby’s started in San Antonio 75 years ago, and the time-capsule cafeteria keeps serving up memories

The Alamo City is one of Avon’s top five growth markets in the country, according to Avon regional account executive Lisa Wright, who oversees sales all the way up Interstate 35 to Minnesota from her home in Bulverde. San Antonio has such a strong customer base that there are not enough Avon reps to serve them, she said.

That could change after this weekend. Avon is holding its annual convention today through Sunday in San Antonio, where an estimated 2,000 Avon sales representatives will paint the Convention Center and River Walk pink with Avon T-shirts and other paraphernalia. Just don’t ask them about pink Cadillacs; that’s a Mary Kay Cosmetics thing sure to make any Avon rep see red.

True, many Avon buyers and sellers carry AARP cards. But Wright said Avon reps also are in their 30s and 40s, while their customers’ core demographic is women in their mid-30s and older. Today’s Avon, she added, isn’t the brand your mother or grandmother bought back in the day.

“We’re in the phase now where we have done enough celebrating our antiquity, and now we’re going into the future in a different way,” she said.

That means more than a dozen product categories under the Avon umbrella, which includes merch beyond makeup. Since LG Household & Health Care acquired Avon in 2019, the Korean consumer goods company has expanded the classic Avon catalog to include popular Korean beauty brands such as Belif and VDL. And in addition to cosmetics and perfumes, Avon now sells clothing, cleaning items, jewelry, gadgets and even pet grooming products.

Still, the Avon classics never go out of style. There are body lotions and shower gels in practical hook-shaped bottles to hang on the shower head. Haiku perfume with its Asian-inspired floral scents and pagoda topper. And good old Skin So Soft bath oil, which Cantu said has such a cult following that some users even swear it makes a good mosquito repellent.

She adds with a laugh that Avon also has “a Bug Guard line for insect repellents.”

On ExpressNews.com: Most of your used makeup will end up in a landfill. Critics are trying to change that.

Of course, Avon’s classic door-to-door business model has gone digital. Reps today market via social media and their own Avon web sites, with news of the latest items ringing computers and smartphones instead of doorbells. Avon also offers “try-it-on technology,” so women can see how that perfect lip gloss or eyeliner looks on them from the convenience of their device’s camera.

“Going house to house, I don’t think anybody does that anymore,” Cantu said.

As Avon has evolved from door-to-door sales to a multilevel marketing company, where salespeople can recruit other sellers and benefit from their sales, the brand has drawn some critics. They compare the company to a pyramid scheme, where newcomers are unlikely to make much if any money.

Wright said Avon representatives are incentivized but not required to build a team or add to Avon’s ranks.

“There is somewhat of a misconception about what multilevel marketing and direct sales is,” she said. “Many hundreds of thousands of our representatives don’t even recruit one person.”

In 2014, according to a Washington Post story, Avon left a trade association that included other multilevel marketing companies, including Herbalife, a dietary supplement company had been accused of being a pyramid scheme.

“Avon’s departure suggests the historically lucrative and powerful firm is concerned about the public perception of its business,” the Post reported.

Despite all the changes, the secret to Avon’s longevity remains the personal connection so many women make over lipstick samples and living-room sales pitches. Avon reps often become like a member of the family, whether it’s an actual relative or a friend of a friend or loved one.

“I think what has sort of been the staying power of Avon is that we are part of local communities around the nation,” said Michael Sengstack, Avon’s director of events and recognition. “The only difference is how those conversations now happen.”

Avon started in 1886 when door-to-door salesman David H. McConnell switched from selling books to selling perfume. He soon set up shop in a tiny Manhattan office and named the business California Perfume Co. at the suggestion of a California-based business partner. The company changed its name to Avon in 1939 as a nod to Stratford-upon-Avon, the birthplace of McConnell’s favorite playwright, William Shakespeare.

As for Avon’s muse, that would be Persis Foster Eames Albee, better known as Mrs. Albee, the first “Avon lady.”

Albee worked with McConnell in the book business and joined him in 1886 to sell perfume. Her assertive yet easygoing approach to selling woman-to-woman made her the mother of the Avon business model. It also made her and Avon pioneers of female entrepreneurship more than 30 years before women could vote.

That empowering business model endures. Avon reps still sell as much or as little as they please with no quotas or startup costs, said Sengstack. Some women who sell Avon run $1 million operations, Wright said, while others work full-time and sell Avon on the side.

On ExpressNews.com: Burgundy Woods is on the rise as home-grown fashionista, style influencer and champion of unsung fashion heroes

The brand behind the motto “The Company for Women” has a few good men, too.

Five years ago, San Antonio Avon rep Beverly Ramirez recruited her husband, Paul, to help sell products. He had such a blast working with his wife that he became a certified esthetician so he could grow their customer base and describe the goods with the same authority she does.

“She enjoys what she does,” Paul Ramirez said, “and I fed off of that.”

Today, the Avon power couple run their own recruiting and sales office on Bandera Road, a cozy space lined with old Avon perfume bottles and a few inspirational signs with phrases such as “Welcome to boss life.” The office also sports a small fleet of vintage Mrs. Albee figurines, which were given to Avon reps over the years for sales achievements.

But perhaps the crown jewel of the Ramirez’s mini Avon museum is a framed photo of Margarita Perez and Maria Luisa Hernandez, two of the oldest and longest serving Avon reps in San Antonio. Perez, who died in April at age 107, sold Avon for 60 years, just like Josephine Perez.

Because if there’s one thing Avon has shown for more than a century, it’s that the beauty of making others look and feel beautiful never goes out of style.