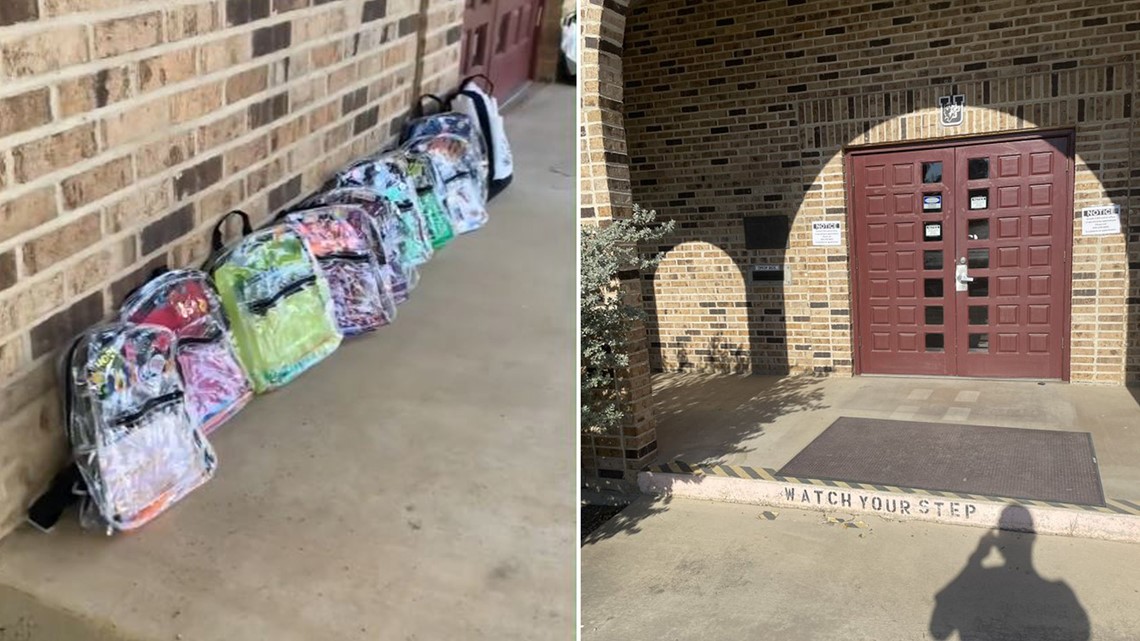 Nineteen backpacks represent each child killed, while two teacher totes symbolize the educators in the classroom.

UVALDE, Texas — Tuesday marks one week since a small group of Uvalde  parents began occupying the parking lot outside the school administration headquarters, where they have been directly demanding accountability following the May 24 Robb Elementary shooting.

The protest, which has seen some community members camping outside the building until action is taken, is specifically demanding that Uvalde CISD police officers who responded at Robb be punished. So far, only Pete Arredondo, the now-former head of the district police force, has faced consequences; he was fired in late August, three months to the day after he led the botched law enforcement response as incident commander.

As for the other Uvalde CISD officers who were at the school when 19 children and two teachers were killed – of which there were five – the district has not said whether it plans to discipline them. The board has announced, however, an external audit of the police force.

While the victims’ parents continue to be the driving force of this demonstration, others in and outside of Uvalde are showing their support.

“It’s really emotional to be there,” said Cristina Noriega.

Noriega visited the administration building on Monday, and noticed a line of backpacks and toe bags at the front entrance. Nineteen backpacks represent each child killed, while the two totes symbolized the educators in the classroom.

“So that everyone (who works for the district) walks in would see that,” said Noriega.

Brett Cross has emerged as one of the most vocal residents calling for accountability after his 10-year-old relative, Uziyah Garcia, was killed at Robb. The last week has seen Cross tweeting firsthand updates to more than 30,000 followers from outside the Uvalde CISD administration facility, where on Tuesday morning he posted video of the bags.

“These lives are who we are fighting for and I’m gonna make damn sure that this administration remembers them,” he wrote in the tweet.

19 children’s backpacks. Two teachers totes. All placed outside the front doors of the administration building. These lives are who we are fighting for and I’m gonna make damn sure that this administration remembers them. pic.twitter.com/KlLjJq0lmd

Less than seven hours later, however, Cross posted that “they took the backpacks,” implying that school officials had removed them.

178.5 hr update: they took the backpacks. We are trying to get them back. pic.twitter.com/CTObKecWnD

Parents want an investigation opened into the school district’s police department. Previously, the district said it hired a private investigator to conduct an independent review.

“As a mother of a 5th grader myself, I would not feel comfortable knowing that those officers, you know, nothing has been done,” Noriega said.

Noriega is from San Antonio and, while not related to any of the Robb victims, said she has been proactive in supporting the families by painting murals of the children near the town square.

She also visited parents at the administration building.

“They have been there for over a week now. They’re putting a lot of pressure on the district to do something,” said Noriega.

Recently a gate was installed on district property, but she hopes it doesn’t deter anyone from showing up.

“If you feel moved by what they are doing and want to say something, be outspoken and go visit.”

KENS 5 has reached out to the school district for an updated response on the protest. The communications director acknowledged our request for a comment, but has not yet provided a statement.