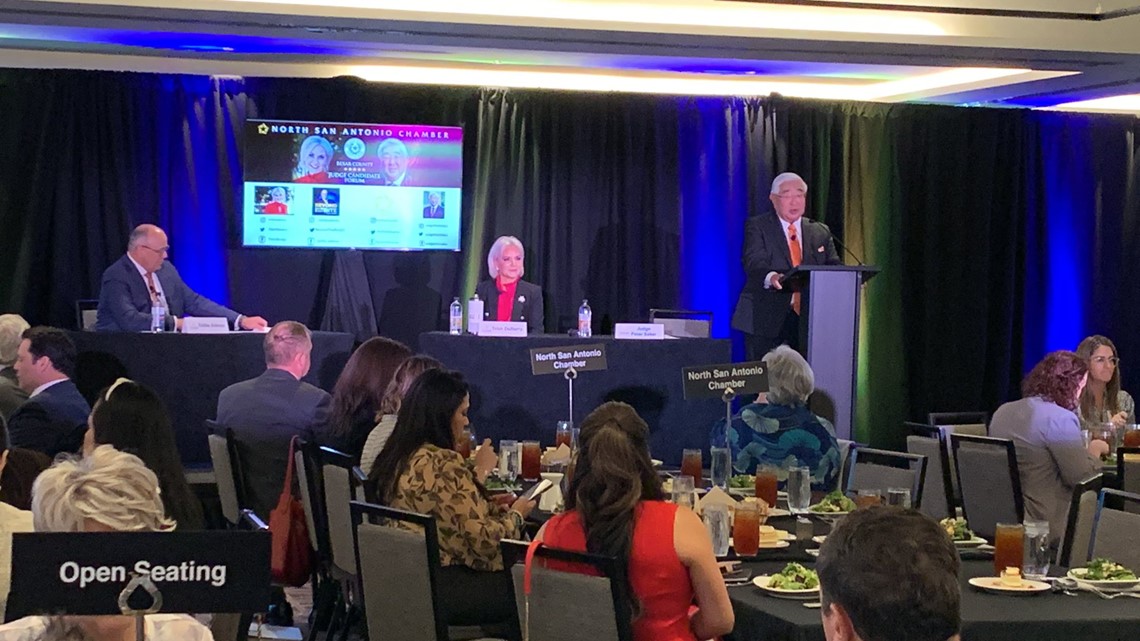 Candidates (R) Trish DeBerry and (D) Peter Sakai spoke during an hour-long forum about various issues facing Bexar County in the present and the future.

The two candidates for Bexar County Judge talked a wide range of policy issues and goals they have if elected to the county’s highest seat.

Business leaders and elected officials listened to the former County Commissioner and former family court judge discuss some of their legislative priorities.

Beyond the traditional duties of judge, DeBerry has some big plans including moving the Bexar County Jail, merging the University Health System with Metro Health and asking for seat on the utilities board with SAWS and CPS Energy. Sakai also wants to be involved in discussions with those utilities. Sakai’s opening remarks focused on economic development, education and workforce, and addressing the digital divide.

One of the topics where the candidates differed on the most was how to handle the Bexar County Jail.

This week, a 60-page report highlighted some of the issues facing the jail for years including overtime for deputies and a large inmate population.

“It’s a barrier to economic development on the west side when you look at the jail that’s there,” DeBerry’s proposal is to move the county jail but did not say where a new jail would be located.

Sakai called building a new jail a “budget buster” and pointed to the report which suggested that a new jail was not necessary.

In a county with more than 2 million people, transportation was another topic discussed during the forum.

“As we look at growth in San Antonio, we can’t become another Austin,” DeBerry said one of her transportation priorities is creating a third highway loop out of Highway 46, which she acknowledged is “controversial” to some. She touted her relationship with Texas Transportation Commission chair Bruce Bugg.

Judge Sakai said he wanted to get an I-35 double-decker project going, while being sensitive to the impact on businesses. He also wanted to commit to finishing the Loop 1604 expansion. Judge Sakai says he plans to take a look at VIA and multi-modal transportation throughout the county.

“We can’t continue to keep putting more cars out or open more lanes,” Judge Sakai also says he is concerned about staying away from non-attainment and air quality issues in Bexar County.

In front of the business-based crowd at the Marriott Rivercenter, both candidates agree they want attract companies to the area, saying they want to find the next Toyota-sized company. DeBerry responded to the question if she thought Bexar County was a friendly place to do business.

“We’ve got to make sure we’re appropriating more money regarding small businesses, but we have to be a salesperson and have passion and energy and ideas,” DeBerry said.

Sakai pointed to the pandemic’s impact on business in Bexar County, and says he wants to listen to stakeholders when making key decisions. One of those decisions during his time on the 225th District Court was delaying the implementation of a paid sick leave ordinance.

The two candidates will be hosting additional forums in the future before Election Day on November 8.