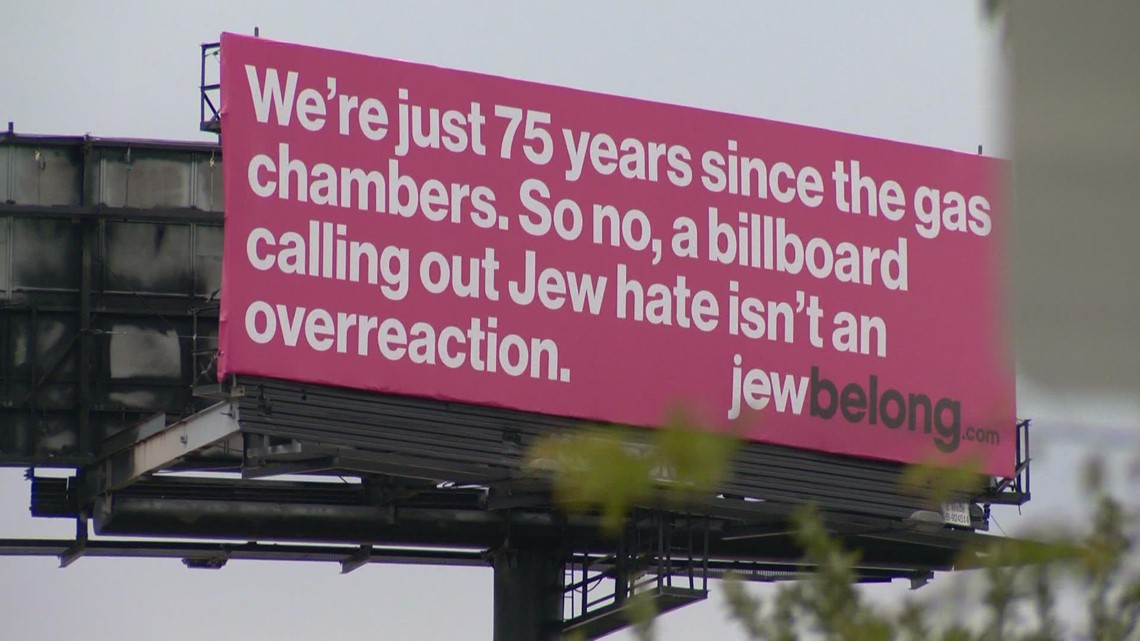 San Antonio is one of at least six cities nationwide where these billboards were put up, with the goal of sparking productive conversations.

SAN ANTONIO — Standing high above three of San Antonio’s busiest intersections are new billboards that might make you do a double-take.

That’s the hope of the non-profit who put them up.

It’s all part of a campaign by JewBelong to fight rising anti-Semitism.

One billboard reads, “It’s just 75 years since the gas chamber. So a billboard calling out Jew hate is not an overreaction.”

“It’s important that that it’s spoken about and that people pay attention and the best way to do that is billboards.”

Jew Belong has three billboards in San Antonio located at 281 and Josephine, 410 and Harry Wurzbach and Highway 90 at West Military Drive. The non-profit carefully selected three of the busiest intersections in the Alamo City, the seventh-largest city in the United States.

San Antonio is one of at least six cities in the nationwide campaign, but the only city with a billboard in Spanish. Gottesman says her non-profit wanted to have a voice in our community.

“Only 2% of Americans are Jewish. So that’s a very small percentage,” Gottesman explained. “So really billboards are for people who are potential allies and just don’t even know that anti-Semitism is an issue.”

Research by the Anti-Defamation League found a 34% increase in anti-Semitic incidents nationwide in 2021 — an all-time high since they started tracking this information in the 1970’s.

Texas ranks in the top five for the most reported occurrances of this kind.

“In Texas, we saw 112 episodes of anti-Semitic activity. This was almost triple from 2020,” said Mark Toubin, the Southwest Regional Director for the Anti-Defamation League (ADL).

2022 is experiencing a huge jump in these incidents as well. While harassment was the most reported act against the Jewish community last year, Toubin says assaults in our region are on the rise.

Toubin says we’re in a climate that’s created an ecosystem where anti-Semitism is breeding. Throw in social media, it’s created a tornado of anti-Semitic activity.

“It’s anxiety over where we are as a society and and societal changes. It is people looking for someone to blame, a scapegoat,” Toubin explained. “Political leaders who are looking to make political gains by blaming others for issues that they probably should have resolved themselves.”

Toubin says we all have a role to play. To improve this situation, he says we can start by not tolerating the hate.

“The littlest of jokes to the largest of a blatant anti-Semitic and and hateful activities. People have to speak out. Then they have to urge our elected officials to speak out when appropriate,” said Toubin. “While it is about the welfare of Jews, it’s also about everyone and the well-being of everyone in our country. Therefore, it takes a whole society approach to lower the level of not just anti-Semitism, but hate in general.”

The billboards by JewBelong will be up for the next three weeks in San Antonio, unless the non-profit gets more funding to keep them up longer. Their messaging is about to go digital, so you may soon see the campaign on your social media feeds.

“Could we go back to when [anti-Semitism] wasn’t normalized? When it wasn’t so typical,” said Gottesman. “It’s growing and it’s really dangerous. It’s sad and it’s dangerous and it’s frightening.”

To learn more about the new billboards across San Antonio, visit JewBelong.com.

Yesterday was #WorldKindnessDay and we’re proud to be a founding member of @ChooseKindness! A kinder world starts with us. #ChooseKindness https://t.co/HGYM2fTGVj