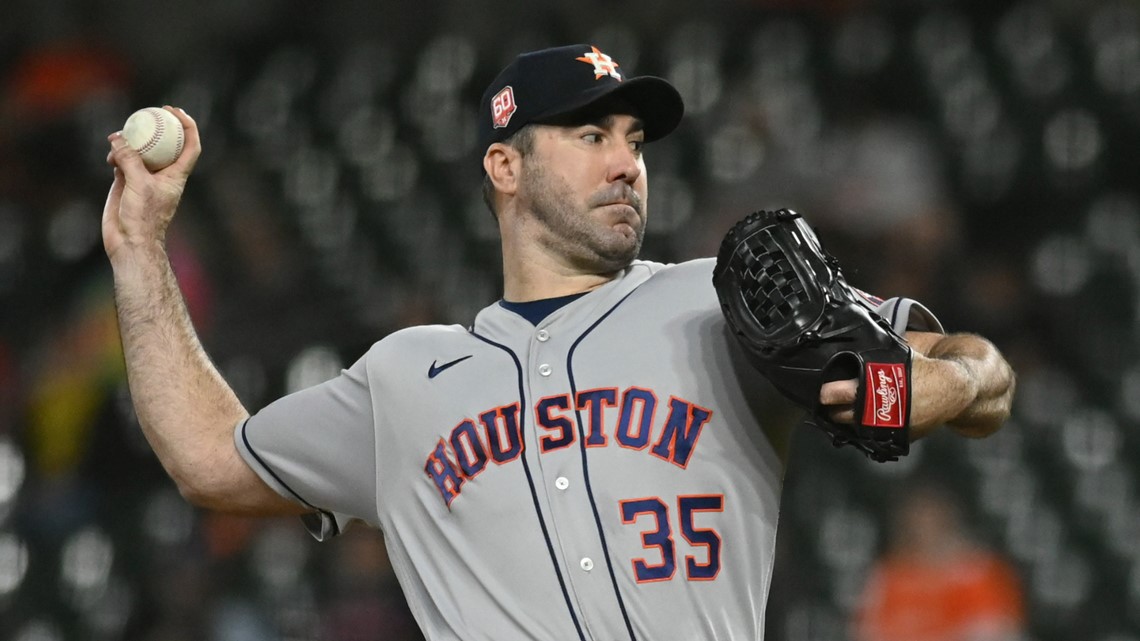 Verlander still leads the majors with a 1.82 ERA.

DETROIT — Kyle Bradish came within one out of his first career shutout, outpitching Justin Verlander in a stellar performance to lift the Baltimore Orioles over the Houston Astros 2-0 on Thursday night.

Bradish (4-7) took a perfect game into the sixth inning before Mauricio Dubon lined a single to left field with two outs. That was the only baserunner Bradish permitted until there were two outs in the ninth, when Jeremy Pena also singled. With the potential tying run at the plate, the Orioles brought in closer Felix Bautista to finish for his 15th save.

Bradish struck out 10 in his latest dazzling effort down the stretch for this surprising Baltimore team.

Trey Mancini went 0 for 3 in his first game back at Camden Yards since the Orioles traded him to Houston on Aug. 1, and the Astros failed in their first attempt at earning their 100th victory this season. They lost for just the second time in 12 games.

The Orioles remained four games behind Seattle in the race for a postseason spot, but they were set to gain ground on the loser of the Tampa Bay-Toronto game.

Verlander (17-4) allowed two runs and six hits over six innings in his second game back from a calf injury. He threw five no-hit innings against Oakland last Friday, but Baltimore broke through against him with three hits in the second.

Ryan Mountcastle and Terrin Vavra hit consecutive singles with one out, and both runners moved up on a groundout by Kyle Stowers. Rougned Odor singled home both runners.

Verlander still leads the majors with a 1.82 ERA.

Bradish whiffed the last two hitters in the second and then struck out the side in the third. He retired the first two batters in the sixth before Dubon’s single landed in front of Vavra in left.

There was a big cheer from the crowd when Bradish came out in the ninth to try for his first complete game. He struck out the first two hitters before allowing Pena’s single on his 100th pitch.

This was the fourth time in his past six starts that Bradish has allowed two or fewer hits while going at least seven innings. It’s another sign of a bright future for a Baltimore team that has also had a chance to showcase promising young position players like Adley Rutschman and Gunnar Henderson this season.

The Orioles nearly scored in the fifth when Cedric Mullins doubled to right and went to third on a throwing error by Kyle Tucker. But Mullins was waved home on the play and third baseman Alex Bregman retrieved the ball and threw to the plate in plenty of time to get him.

Astros: 2B Jose Altuve missed the game after he was hit by a pitch on the left elbow Wednesday against Tampa Bay.