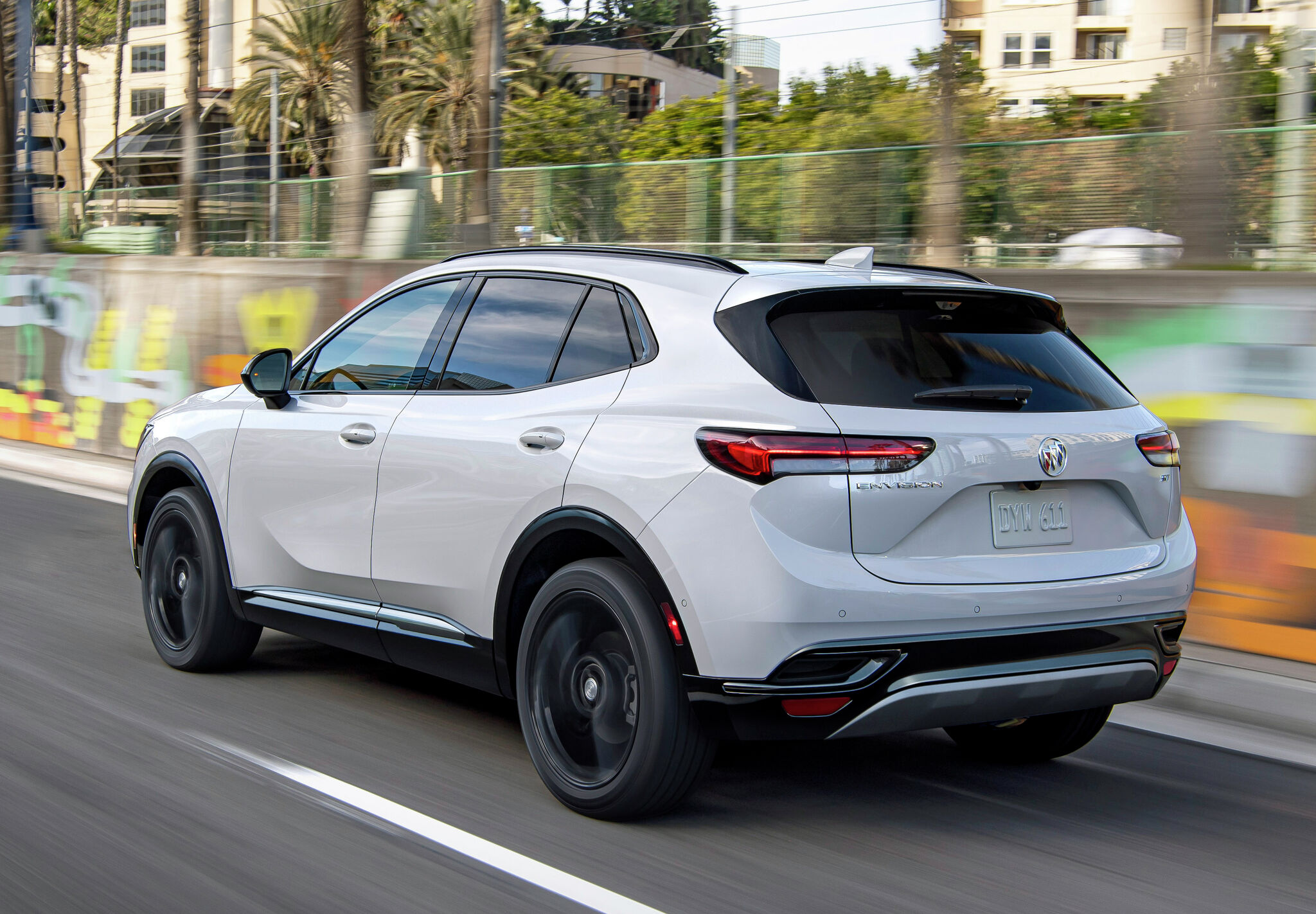 Buick’s Envision compact crossover, introduced for 2018, entered its second generation two years ago with a complete makeover, and now returns for 2023 with no major changes.
The China-built Envision has become one of Buick’s best-selling models.
For 2023, there are three trim levels, beginning with the Preferred model ($33,400 plus $1,395 freight, front-wheel drive; $37,050, all-wheel drive), followed by the Essence ($37,500, front drive; $39,300, AWD) and the top-of-the-line Avenir ($45,660, front drive; $47,460, AWD).
Avenir is Buick’s high-end sub-brand, and the Envision joined other models in the SUV lineup with this model with the 2021 redesign. It’s similar to the Denali sub-brand in the GMC fleet – the fanciest and most fully-equipped versions available.

As before, there is room for up to five passengers in the Envision, which comes with a full array of standard and available high-tech safety features, along with a list of standard active safety technologies.
All Envision models are powered by a 2.0-liter, four-cylinder turbo engine, which produces 228 horsepower and 258 foot-pounds of torque. It’s connected to a nine-speed automatic transmission.
For the second generation, the Envision is lower and wider than before, with styling designed to combine the exterior features of a sedan with the practicality of an SUV.
Our tester for this report was the Essence AWD model, with the Summit White exterior color (no extra charge) and Ebony perforated-leather interior with Ebony accents.

A hands-free programmable power liftgate is standard on Essence and Avenir models, and available on the Preferred.
Sourced from China, the Envision fits into Buick’s U.S. lineup between the larger Enclave, assembled in Michigan, and the smaller Encore and Encore GX models, which are assembled in South Korea.
The turbo engine was a carryover from the previous generation, along with the nine-speed automatic transmission, which was added for 2019.
This engine gave us plenty of power in most driving situations, including uphill freeway ramps and some hilly country roads.
All models feature LED headlights, taillights and daytime running lights, as well as welcome lighting, which activates when using the remote key fob.
There are several special design features that distinguish the Avenir model from the other Envision trims, including a mesh grille with tinted chrome trim, and unique 20-inch wheels with a Pearl Nickel finish.

Also included on the Avenir are diamond-perforated quilted leather seats, heated and ventilated in the front, and heated in the rear outboard positions. There also is a massaging feature on the driver’s seat; navigation; and wireless smartphone charging.
Our Essence model came with the Enhanced Buick Driver Confidence package at no extra cost, adding active-safety features including Automatic Emergency Braking, Front Pedestrian Braking, Lane Keep Assist with Lane Departure Warning, Lane Change Alert with Side Blind Zone Alert, Forward Collision Alert, Following Distance Indicator, IntelliBeam automatic high beams, Rear Cross Traffic Alert, and Teen Driver system.
Inside, the Envision has an instrument panel that tilts toward the driver for a better view. It includes the wide touch screen for the navigation/infotainment features.

The redesigned center console is where you’ll find the new Electronic Precision Shift, which uses push/pull buttons to shift the transmission. It took me a minute to find the shift buttons the first time I sat in the driver’s seat.
There is a “dual-wing” center armrest, which carried over from the previous generation. It allows access to the under-armrest storage compartment without disturbing the resting elbow of the other front-seat passenger.
A covered storage compartment is provided below the dash, and it has a retractable cover to hide valuables – think smartphone. It’s also where you’ll find the wireless charging pad. An SD card slot, 12-volt power outlet and USB ports are in the front of the compartment.
Front occupants ride in style in the bucket seats, which both have eight-way power adjustment. A memory system for two separate drivers holds the driver’s seat and outside mirror settings.
There is a three-person rear bench seat with a 60/40-split seatback that can be folded to expand cargo capacity. It allows the seat to be folded flat into the cargo floor.
A pull-down center armrest in the rear eliminates the center seating position, and has two cupholders. The rear of the front center console has HVAC vents for the rear passengers, along with controls for the heated outboard seats. There are a 12-volt outlet and USB charging ports, as well.
Envision has 25.2 cubic feet of cargo space behind rear seat, and 52.7 cubic feet of space with the rear seat folded.
Dual-zone automatic climate control was standard, along with a heated/leather-wrapped steering wheel and a cabin air ionizer with an air-quality indicator to monitor the cabin’s air.

The ride is quiet, even at highway speeds, thanks in part to Buick’s QuietTuning, which is included on all models. It features active noise cancellation and strategically placed acoustic materials, Buick says.
Also standard is the Rear Seat Reminder, which is designed to help prevent people from accidentally leaving their kids, pets or perishable groceries in the back seat when they park the car and walk away.
The next-generation Buick infotainment system includes built-in Amazon Alexa capability, along with wireless Apple CarPlay and Android Auto smartphone connectivity.

EPA fuel-economy ratings for our Envision Essence AWD model were 22 mpg city/29 highway/25 combined. With about a 50-50 mix of city and highway driving, we averaged about 24.6 mpg.
Total sticker price for our 2023 Buick Envision Essence AWD model was $43,090, including freight and options.
The automotive columns of G. Chambers Williams III have appeared regularly in the Express-News since 2000. Contact him at chambers@auto-writer.com or on Twitter @gchambers3. His driving partner Emma Jayne Williams contributed to this report.