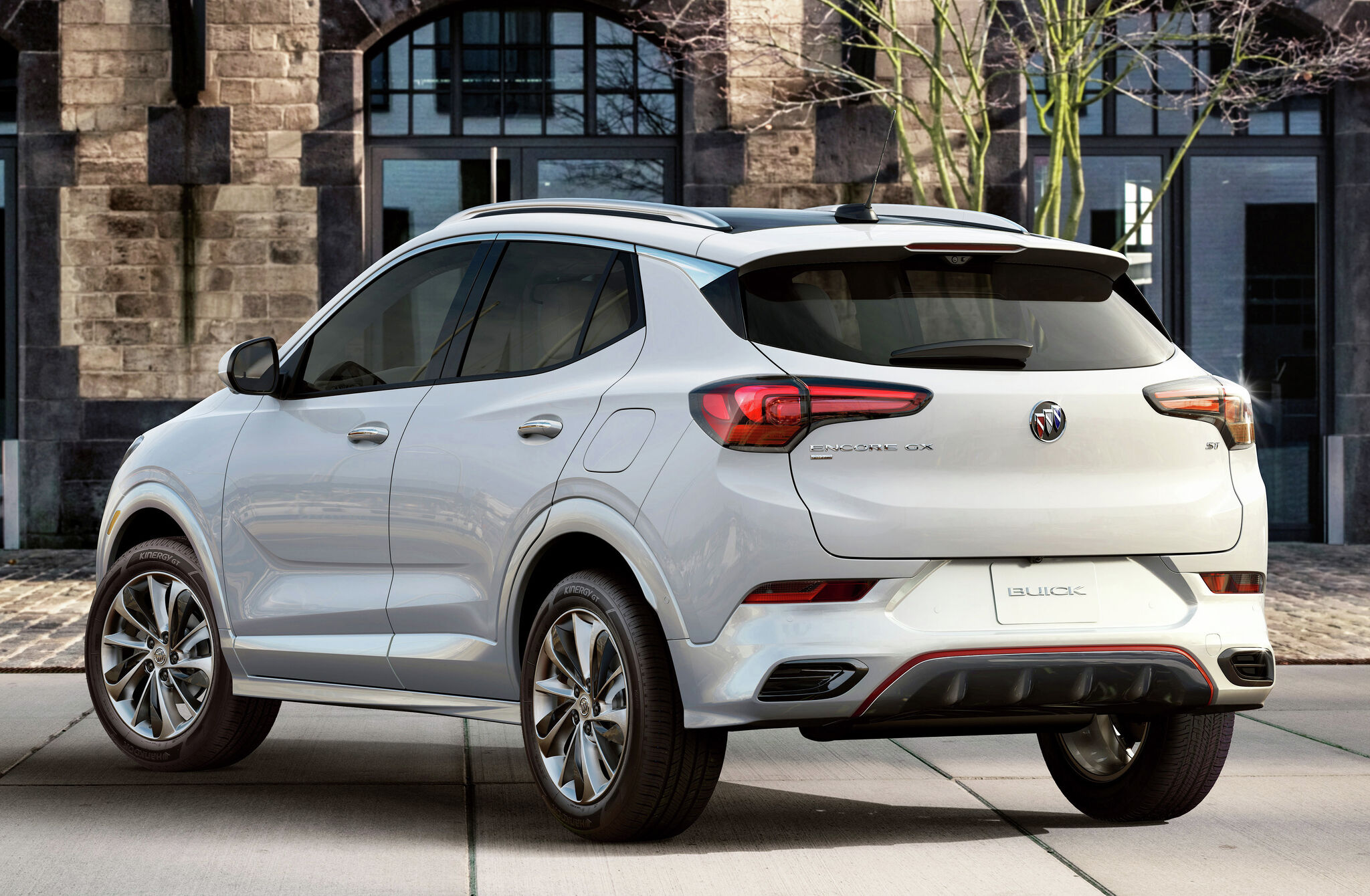 Now in its third year, the five-passenger Buick Encore GX is a small crossover that fits in the lineup just above its slightly smaller Encore sibling and just below the larger Envision model.
For 2022, the Encore GX comes only with a 1.3-liter turbocharged three-cylinder engine, rated at 155 horsepower and 174 foot-pounds of torque.

Gone is last year’s base 1.2-liter turbo three-cylinder engine, which was available only on front-wheel-drive models. While that 137-horsepower engine still shows up on the Buick consumer website, dealers say they can no longer order cars with it.
There are three GX trim levels offered: the base Preferred model ($25,995 plus $1,195 freight); midlevel Select ($27,340); and the top-end Essence ($30,120). Those prices are for front-wheel drive  models, but all-wheel drive is available across the line.
A continuously variable transmission is standard on front-drive models, while all-wheel drive models have a nine-speed automatic transmission with a disable switch to choose AWD for more traction or FWD for better fuel economy.
The Encore GX, at 171.4 inches, is three inches longer than the regular Encore, at 168.4 inches. The GX’s wheelbase is 102.2 inches, compared with 100.6 inches for the Encore.

The extra length gives the GX slightly more passenger volume, at 94.3 cubic feet, compared with 92.8 cubic feet for the Encore.
GX cargo space is more generous as well, with 23.5 cubic feet of space behind the rear seat, compared with 18.8 for the Encore. That expands to 50.2 cubic feet in the GX with the rear seatback folded down, while the regular Encore maxes out at 48.4 cubic feet.
Our test vehicle was the 2022 Encore GX Essence all-wheel drive, with $4,270 in options added to the $30,600 base price.
It came in the Ebony Twilight Metallic exterior color, which cost $495 extra.
Standard features on the Essence model include leather seats, which were a beautiful two-tone color, which looked to me to be dark brown with camel-color inserts. Buick called my tester’s interior “Signet/Ebony.”
The Essence also comes with LED headlights and taillights, a heated/leather-wrapped steering wheel, wireless Apple CarPlay and Android Auto connectivity, satellite radio, an air ionizer, and a 120-volt power outlet at the rear of the center console.
The Buick Driver Confidence package also comes with the Essence model, bringing        Automatic Emergency Braking, Front Pedestrian Braking, Lane Keep Assist with Lane Departure Warning, Forward Collision Alert, Following Distance Indicator, and the       IntelliBeam automatic high-beam assist.

The Encore comes with OnStar with 4G LTE connectivity and a built-in Wi-Fi hotspot. That gives everyone in the vehicle access to the Internet while the vehicle is in range of cell towers. GM says the hotspot is on whenever the car is running, and it includes a free three-month trial subscription.
A noise-control system with active noise cancellation helped keep our GX quiet at highway speeds.
Outside, our Encore GX came with the Sport Touring Package ($695), which brought 18-inch machined aluminum wheels with High Gloss Dark Android pockets, paired with 225/55R18 all-season blackwall tires, along with body-color side moldings and rocker-panel moldings; a sport front bumper and custom grille, both with red accents; and front and rear bumper protective molding.

All the available exterior colors cost extra except for Summit White. Besides our car’s Ebony Twilight Metallic, there are four others that also cost $495 extra: Sapphire Metallic, Sunset Glow Metallic, Rosewood Metallic, and Satin Steel Metallic. There’s also White Frost Metallic for $1,095 more.
The Encore and Encore GX are a big part of General Motors’ efforts to bring new, younger buyers to Buick as it tries to rebuild a brand that had long been associated with big cars and older clientele. Since its introduction, the Encore has become Buick’s top-selling model.
This small crossover originated as a version of the Opel Mokka, from GM’s now former German subsidiary that was sold to French automaker Peugeot in 2017. The Buick Encore and Encore GX, as well as the similar Chevrolet Trax, are assembled in GM’s plant in South Korea.

Encores are junior versions of the full-size Enclave crossover, which has been redesigned for 2022, and are among a growing number of small crossovers introduced by a variety of automakers as more consumers look for vehicles that are versatile and economical to operate.
Along with the addition of the slightly larger China-built Envision crossover for 2016, which was completely redesigned for 2021, Buick now has a crossover-only lineup now. There are no car models left in the lineup.
With room for up to five people, the Encore was designed for young, upwardly mobile singles and couples looking for a vehicle that fits their active lifestyles. It also appeals to empty-nesters and retired consumers.
The Encore GX’s all-wheel drive is designed to send power almost 50-50 to the front and rear on startup, but favors the front wheels in normal driving until the automatic system detects wheel slippage. There is no low-range gearing for serious off-road driving, however.
Driving the Encore GX is rather fun for a crossover. The turbo boost comes in quickly when the accelerator is mashed, but that’s not the best way to drive to save precious gasoline at today’s prices.
The electric power steering was precise and predictable, and the four-wheel antilock disc brakes made for quick and sure stopping, even in the occasional near-panic situations that seem to occur with more frequency when traffic gets thick.
With its small size and light weight (under 3,300 pounds), the Encore GX offers the best fuel economy in the Buick lineup, and EPA ratings that are among the best in the crossover realm.
The 1.3-liter engine is rated at 30 mpg city/32 highway/31 combined with front-wheel drive, and 26/29/28 with all-wheel drive.
During my test, I averaged about 27.2 mpg, with a mix of city and highway driving.
Inside, the Encore doesn’t feel small. Tall people – six feet or more – can ride in comfort in the front bucket seats, and they’re riding higher up than you would imagine in a vehicle with such a small exterior size. There is no feel of being in a tiny vehicle, sitting close to the ground.

The Encore is about a foot shorter than the Honda CR-V. It’s about the same size inside as the Volkswagen Tiguan, which is about six inches longer, and the Audi Q5, which is about a foot-and-a-half longer.
We were able to seat three average-size adults in the rear bench seat for some short trips. Outboard passengers had plenty of leg and knee room, although the middle rider was a bit cramped and suggested that might not be a good place for a long trip.
A child safety seat would fit there well, however, with two larger kids or even small- to medium-size adults on each side.
Standard safety features include 10 air bags, electronic stability control, rearview camera, cornering brake control with electronic brake assist, tire-pressure monitoring, and a safety-cage body designed to protect the occupants.
Total sticker price for our 2022 Buick Encore GX Essence with all-wheel drive was $36,065, including freight and options.
The automotive columns of G. Chambers Williams III have appeared regularly in the Express-News since 2000. Contact him at chambers@auto-writer.com or on Twitter @gchambers3. His driving partner, Emma Jayne Williams, contributed to this report.