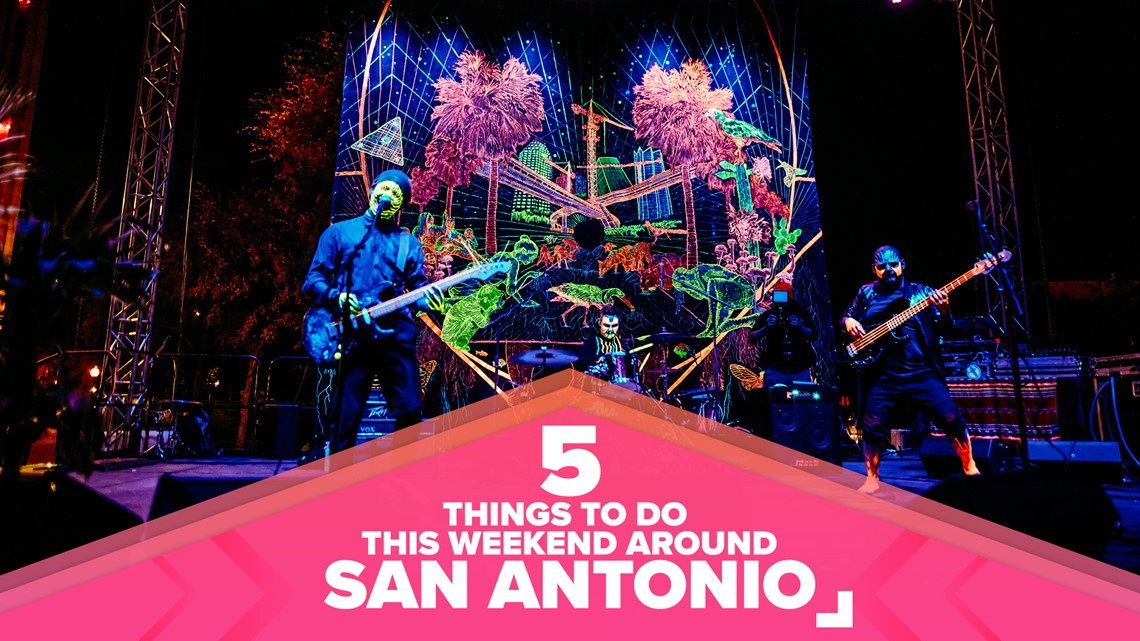 We’re still a few months out from Fiesta, but the holiday season brings parties of its own to the Alamo City.

Every kind of art you can imagine will be showcased at the 2022 Luminaria Contemporary Arts Festival. Taking over downtown Saturday night, it brings fine art, theater performances, live music, fill, poetry and massive installations to the heart of San Antonio. The artists come from all over and the work is wide-ranging, with streets and buildings becoming “a place of dreams and imagination.”

When: Saturday, from 6 p.m. to midnight.

Where: Downtown, from Travis Park to the Tobin Center.

In collaboration with the San Antonio Museum of Art and its ongoing exhibit of art depicting her, Malinche – the indigenous woman who played a role in Spain’s conquests of Mexico centuries ago – is serving as the inspiration for a new production created by the Guadalupe Dance Company.

“Soy Malintzlin” will run about an hour and provides a kinetic, musical interpretation of the iconic but controversial historical figure. Combining onstage creativity with the thrill of modern dance, it serves as a companion work of art to the pieces on display at SAMA.

The competition slates also includes contests for vocals and songwriting, while a general-information workshop is also being offered. Appearing at the festival for the first time is Mariachi Nuevo Tecalitlán, a world-renowned ensemble that has been playing for audiences since 1965; they’re expected to take the stage Friday, following competition.

When: Friday’s concert starts at 7:30 p.m., but Mariachi Extravaganza events kick off Wednesday.

A modern Christmas classic screens on the south side

We just like to smile, smiling’s our favorite. And few things make us smile this time of year like Will Ferrell’s Christmas comedy classic “Elf,” which screens Saturday evening at Mission Marquee Plaza. Get in the mood for the 2003 film with a holiday spectacular earlier in the afternoon, complete with face-painting, a holiday singalong, jazz performances, and even the chance to meet Buddy for yourself!

Pets are welcome for the free screening, and families are permitted to bring their own blankets, lawn chairs and snacks as well. Food trucks will also be on site. “Elf” is rated PG and runs an hour and 37 minutes.

When: Saturday. Festival begins at 4:30 p.m., movie begins at dusk.

One of the community’s most vivid celebrations of indigenous life and culture returns to the Briscoe Western Art Museum this weekend.

Families heading downtown for the Yanaguana Indian Arts Festival can expect a full slate of activities, including pow wow performances, storytelling sessions, artisan workshops and flute performances. It’s an opportunity to immerse yourself in the heritage of the Native American communities “who helped shaped San Antonio” as we know it, along with their enduring traditions. Come hungry: Native American-inspired food will also be available to sample.

Magik Theatre’s season continues with Saturday’s opening-night show of “The Velveteen Rabbit,” a 100-year-old story getting new life on the children theater’s stage. Tickets start at $23.50.

Meanwhile, the San Antonio Philharmonic’s final performances of the year are scheduled for Friday and Saturday. Featuring guest conductor Christopher Wilkins, audiences will be transported “on a musical expedition stretching from the frozen terrain of the South Pole to the infinite vacuum of space,” the melodies backed by footage of historic voyages to further immerse guests. Tickets start at $30.

For a different kind of musical experience, tickets are still available for Grupo Firme’s Saturday show at the Alamodome, where the Baja California-based group will perform their biggest hits. Available tickets range from $45 to $175, before fees.

On the can and on the lam: Burglars leave stinky surprise at historic King William home
To curb violent crime, San Antonio police are trying something new
Chill pervades China's tech firms even as crackdown eases