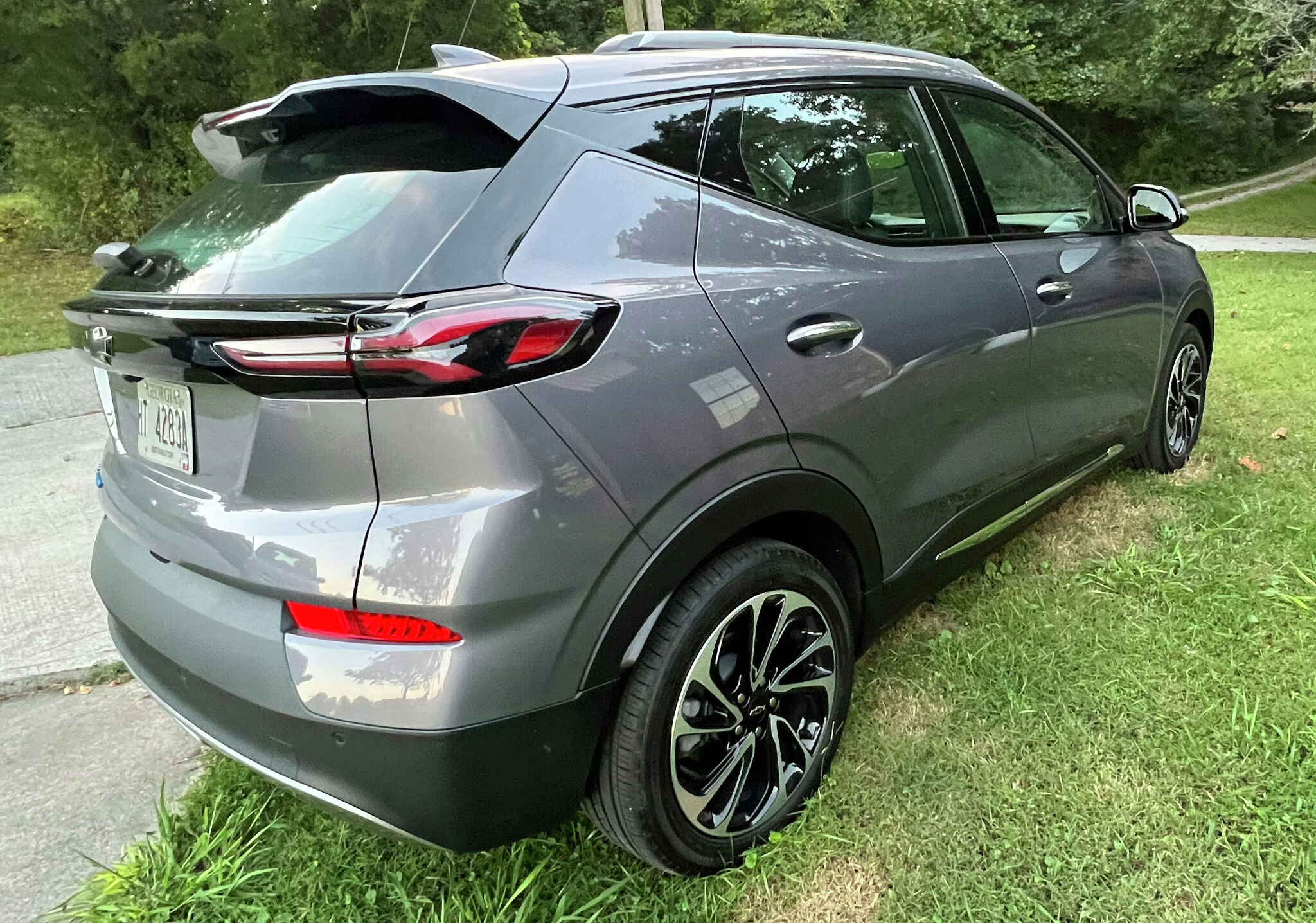 Chevrolet expanded its electric vehicle lineup for 2022 with the introduction of the all-electric 2022 Bolt EUV – Electric Utility Vehicle — alongside the redesigned Bolt EV.
For 2023, prices have been dropped significantly, with the Bolt EUV starting at  $27,200 (plus $995 freight) for the base LT model, and ranging as high as $32,195 for the top-of-the-line Premier Redline model.
In between are the LT Redline model ($27,695) and Premier ($31,700). The Premier price is down $5,800 from the price of the 2022 Premier model we tested for this report.

EPA ratings show an estimated range of 247 miles on a full charge, with a charging time of 7.5 hours at 240 volts. GM’s own statistics indicate a charging time of 10 hours with the provided dual-voltage charging cord at 32 amps. With a Level 3 fast charger, GM says the Bolt EUV can be charged to up to 95 miles of range in just 30 minutes.
The Bolt EUV’s 150kW electric motor is rated at 200 horsepower and 266 foot-pounds of torque. The car has a 65kWh (kilowatt-hour) lithium-ion battery pack.
There is Electronic Precision Shift with one-pedal drive mode, which slows and can fully stop the vehicle when the driver moves the foot off the accelerator pedal.
While the regular Bolt EV has a hatchback car design, the Bolt EUV takes on the proportions of a small crossover utility vehicle, with only electric drive available.
General Motors says the new Bolt EUV carries the same “proven technology that helped make the Bolt EV the industry’s first affordable, long-range electric vehicle.”

The smaller Bolt EV also has lower prices for 2023, starting at $25,600 (plus $995 freight), and ranging to $28,800.
Both models  are part of GM’s plan to launch 30 new electric vehicles  globally by 2025.
“The new Bolt EUV is the best of the Bolt EV packaged in an SUV-like vehicle with more technology and features, giving customers more choices and reasons to switch to electric,” said Steve Hill, vice president of Chevrolet.
While widening Chevrolet’s electric-vehicle lineup, the Bolt EUV also became the first Chevrolet vehicle to offer Super Cruise, the industry’s first true hands-free driver assistance system for enabled roads.

Super Cruise was included on our Bolt EUV test for an added package charge of $2,200.
The new EUV model also helps make EV charging more convenient, thanks to its new Dual Level Charge Cord, which for many customers will eliminate the need to purchase a separate charger for their home, Chevy says.
It has a changeable plug that allows the customer to plug into a standard 120-volt three-prong outlet for Level 1 charging or a 240-volt outlet for Level 2 charging up to 7.2 kilowatts.
The Dual Level Charge Cord is standard on the Bolt EUV and is an option on the smaller Bolt EV.
For maximum Level 2 charging speed, both vehicles are now capable of 11 kW Level 2 charging, but separate charging equipment (not included) is required, the automaker says.
When our Bolt EUV was delivered to us, it was showing a range of 195 miles remaining on the battery charge. When we first began trying to recharge it at home it was down to 65 miles, but we kept getting an “Unable to Charge” error message when plugging up to our 120-volt power outlets.
It dropped to as low as 45 miles remaining before we found a Level 2 charger (240 volts) that we were allowed to use at a Ford dealership close to our home. We charged the Bolt there for about six hours, and raised the miles-remaining to about 175. At that point, we left the car parked in our driveway until it was picked up.
Obviously, anyone who buys a Bolt or any other EV should have Level 2 charging capability at home, so the vehicle could be charged up fully overnight.

Chevrolet says it will cover standard installation of Level 2 charging capability for eligible customers who purchase or lease a Bolt EUV or Bolt EV, helping even more people experience how easy it is to live electric.
For away-from-home public charging, GM is providing customers with convenient and expanded access to EVgo, which is billed as the nation’s largest public fast-charging network.
GM and EVgo are planning to triple the number of fast chargers, adding 2,700 more across the country by the end of 2025.
The Bolt EUV has a modern, muscular design and a roomier interior than that of the Bolt EV, including ample rear legroom. The Bolt EUV has three inches more rear legroom than the Bolt EV.
It also features a sculpted grille and signature lighting, including standard LED headlights and Chevy’s high-eye daytime running lights, which double as sequential turn signal.

Other styling cues include a center crease line that runs from the front fascia through the hood, along with seamless horizontal body lines that give a sense of motion even when the vehicle is standing still. Standard roof rails are included.
Driving the Bolt EUV is fun, with lots of torque available from the start with the electric motor. Ride comfort and handling are similar to those of the Chevrolet Trax small crossover, which is about the same size.
Chevy Safety Assist is standard on the Bolt EUV, and includes safety and advanced driver assistance technologies such as Automatic Emergency Braking, Forward Collision Alert, Lane Keep Assist with Lane Departure Warning, Following Distance Indicator, IntelliBeam and Front Pedestrian Braking.