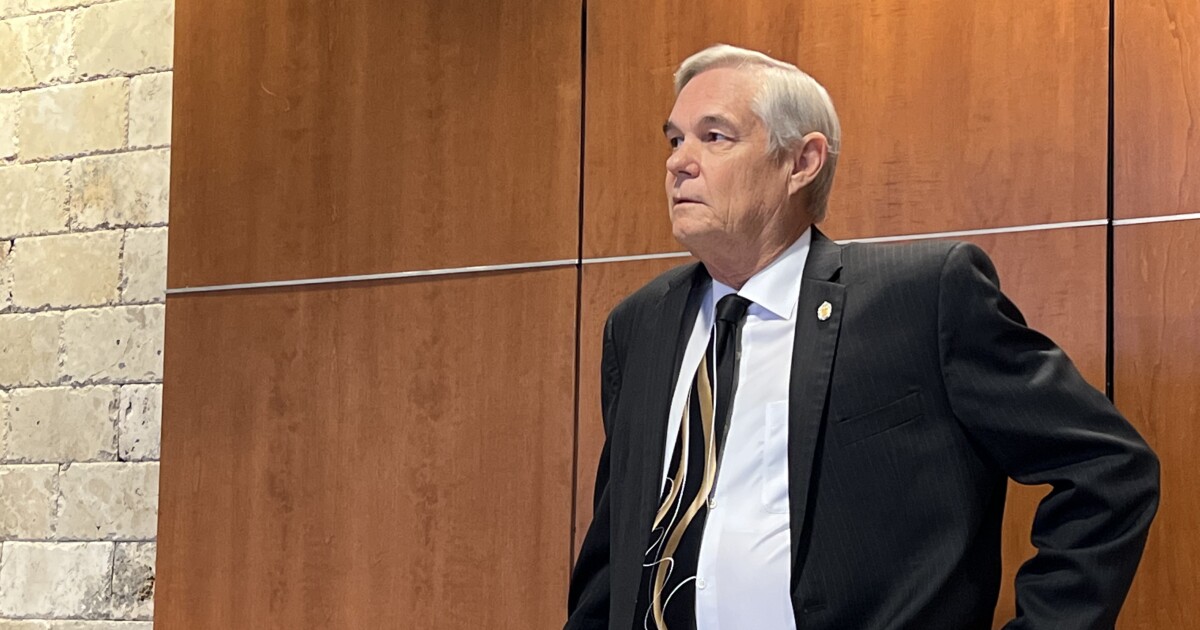 District 10 City Councilman Clayton Perry announced on Monday that he planned to take a sabbatical from the San Antonio city council. He said he did not plan to resign.

Some of his colleagues agreed, and during a special council meeting, they approved an amendment to the resolution on his conduct that would remove the call for him to step down. The resolution expressed no confidence in Perry.

“I’m human, and I made a bad decision — a huge one,” Perry said earlier on Monday.

He made his announcement during a midday Monday press conference at his Northeast Side field office, about 90 minutes before the council meeting, which was originally planned to express no confidence in him and to vote whether or not to call for his resignation.

Perry asked the council for “compassion” — which seemed to be what the council gave him. By the end of the 90 minute discussion and public comments, District 8 Councilman Manny Pelaez made a motion to amend and soften the resolution’s language. District 1 Councilman Mario Bravo seconded the motion.

When put up for a vote, eight members voted to pass the amendment. Two abstained. Mayor Ron Nirenberg voted no, meaning he wanted the resolution calling for Perry’s departure unchanged.

Rocha Garcia also offered another amendment to allow for a temporary appointment in the District 10 office while Perry takes his temporary leave of absence. It was seconded and carried.

The amendment also removes the call for resignation.

The red X would be struck from the resolution. If the amendment motion passes. pic.twitter.com/cfW9RWLjRG

Members of the audience applauded as Perry entered the council chambers about an hour after his press conference. Some of his council colleagues shook his hand, including Mayor Ron Nirenberg, or embraced him.

Once the meeting began, the public spoke first.

Michael Anderson, a Perry supporter, said Perry has been out front in bringing property tax relief. He says he failed himself but has never betrayed his constituents. He added that he was concerned over the appointment process, if Perry did resign.

Lon Jett said, “Everything [Perry] does turns to gold. … He messed up. He already said that. … Let’s vote no [on the resolution.]”

Peggy Sue Wilson-Schmueckle said that “this was an accident not a pre-planned criminal conspiracy or cover-up.” She added that “Clayton Perry has owned up to his actions” and this should now be for the courts to decide. “This should not be Judge Judy,” she said.

James Hamilton said Perry asked for white privilege, referring to Perry’s request for compassion from the council and his plan to take a sabbatical instead of resigning. “He’s asking for something for that every other person in San Antonio doesn’t get,” Hamilton said. “You’re not going to get white privilege on this. … Resign. Go get the help you need.”

BREAKING NEWS: District 10 City Councilman Clayton Perry is NOT resigning his seat following hit-and-run allegations and release of body cam footage of the incident on November 6 that shows impairment.

He’s asking for a sabbatical from the city council. @TPRNews pic.twitter.com/xul7osBF9U

Jeff McManus, chair of the Bexar County Republican Party, thanked Perry “for acknowledging your errors. … I don’t believe the council should be taking this action today.” McManus asked the council to allow Perry his time for reflection.

McKee-Rodriguez said that this has been a terrible time for San Antonio, and he gave Perry credit for being an effective councilman for San Antonio. However, he added, “when we make mistakes, how we make them is important,” and so is how people take accountability for them.

District 1 Councilman Mario Bravo said that “drinking and driving and a hit and run are serious crimes.” However, he added that the process to ask for Perry’s resignation felt rushed. He abstained from the vote on the resolution.

🧵THREAD: The San Antonio city Council is considering a resolution asking for the resignation of D10 Councilman Clayton Perry.

Perry said he does not plan to resign but is asking for a sabbatical. @TPRNews pic.twitter.com/gyNRomXQ8b

The series of announcements and statements followed the release of body cam footage on Thursday showing the councilman possibly inebriated following an alleged hit and run.

Perry faced one charge of failing to stop and exchange information. It was unclear if he was formally charged with DUI. The councilman remained out on bond.

It began with the officer seeing Perry’s black Jeep Wrangler running in the driveway.

According to the police report and video, Perry, who is referred to as S1, was approached by the officer in his backyard at 10:15 p.m., as seen on timestamps in the video.

“I heard a moaning sound coming from the backyard of the location. The gate was open, and I could see a male, lying on the ground. I approached S1 and saw a laceration to his head. S1 was wearing a black Polo shirt and light khaki shorts. I contacted S1 and observed him to be slow to answer questions, confused about recent events of the evening, and once he was standing was very unsteady on his feet,” the report said.

In response, Perry said he was “just trying to get into my house,” and he denied several times that he had been drinking or driving.

“I’m not gonna lie — I ask a lot of questions that I already know the answer to,” De Rosiers said. “So the more you lie to me, the harder this is for you — easier for me, harder for you.”

“So who was driving?” he asked.

De Rosiers called an ambulance for medical treatment but Perry ultimately refused to be treated.

After finding Perry’s wallet, he asked if he could pull out his ID, to which the councilman said, “yes,” and Perry’s yellow City of San Antonio ID badge could be seen in one of the wallet’s pockets.

By the end of the footage, he asked Perry if he could search his Jeep to find his house keys, which Perry appeared unable to locate. However, the councilman declined.

While the entire video lasted 13 minutes and 37 seconds, the footage ended at 10:41 p.m., meaning the entire encounter between the officer and Perry was about 26 minutes. There were several cuts in the video, with a large piece missing while EMS spoke with Perry.