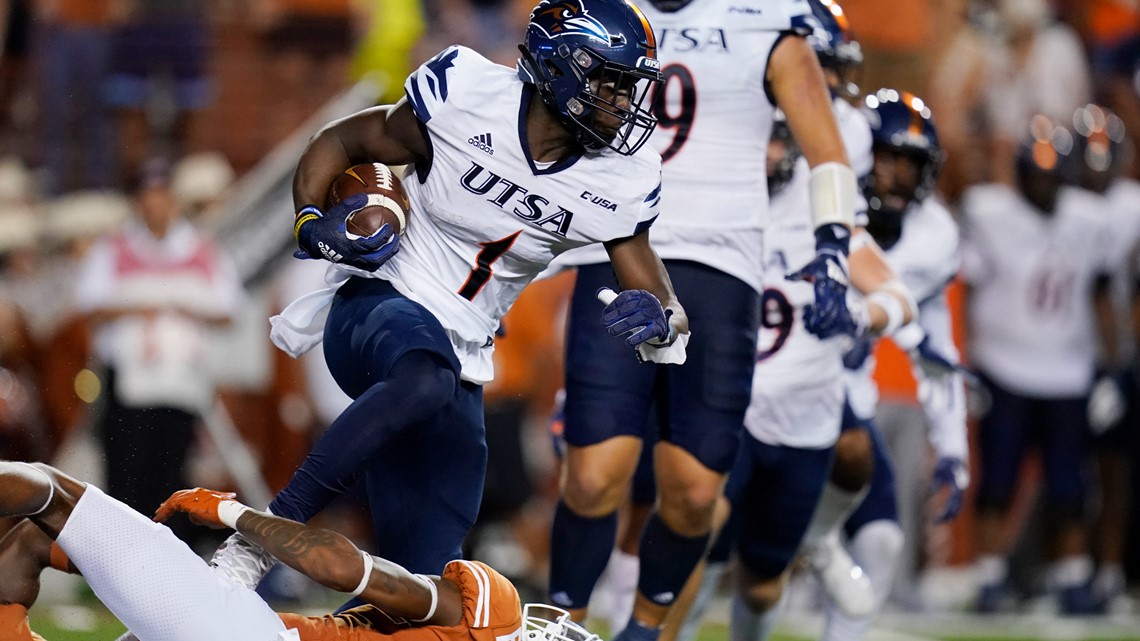 Are the Longhorns back? Are the Roadrunners in good shape? Are the Cardinals set up for a memorable season?

SAN ANTONIO — I’ve learned some things after the first three weeks of the college football season.

Let’s start local, because we support San Antonio college football before we support anything else. There’s no reason the UTSA Roadrunners can’t repeat as Conference USA champs. Had the season opener gone their way, they’d be 2-1. Instead they’re 1-2, and that’s not entirely unrealistic for them three games in.

Circle their early-October home game with Western Kentucky and an early-November matchup at Alabama-Birmingham as probably their toughest remaining opponents. There’s still lots of football left, and don’t forget they are the conference preseason favorites to bring home the trophy. #BirdsUp

The UIW Cardinals might go undefeated. Call this my bold prediction segment, and it might not be that bold since the Cards are the only undefeated Southland Conference team through the first three weeks of the season.

We saw what their offense can be with that stunning rally at Nevada, a game which they ended up winning 55-41. The ESPN game forecast gave them a 4% chance to win the game in Reno; they won by two touchdowns. First-year head coach G.J. Kinne has continued what former head coach Eric Morris started, and things look good early. Every team is seemingly due for one trap week these days in college football, but let’s hope Incarnate Word can avoid that. #TheWord

I’m not ready to pronounce that the Texas Longhorns are back, but there are signs Steve Sarkisian is injecting the proper enthusiasm and attitude back into the Burnt Orange. They can definitely accomplish some things through their rush attack with Bijan Robinson and Roschon Johnson; especially Robinson, who will be gone after this season. His time is now.

The Horns appear to have found their QB star in Quinn Ewers. He participated in pregame drills before the UTSA game and was in uniform, so the expectation seems to be that he’ll return sooner than expected. Texas travels to the west Texas plains of Lubbock this week to battle the Red Raiders. That’s followed by welcoming West Virginia, and then the Red River Showdown.

Oklahoma looks really good. Backup quarterback Hudson Card was limited against UTSA with an ankle injury from the previous week, and we can assume he’ll be less than 100% this weekend if Ewers isn’t available (he is, by the way, back at practice this week). Coach Sark might be forced to rinse and repeat his UTSA gameplan for Texas Tech if Ewers still needs more healing time. #HookEm

The Texas A&M Aggies rallied after that Kyle Field Week 2 stunner at the hands of Appalachian State. The Mountaineers had fun all week on social media about the upset win, in a game that got them $1.5 million.

The Aggies made a QB change from Haynes King to Max Johnson for the following game, which paid some dividends, but was still far from impressive. The team still looked fairly challenged at times, but then again, Miami was ranked inside the top-15. Maybe I should cut em a break? A&M has scored 65 points in the first three weeks of the season and will host 10th-ranked Arkansas this weekend before conference road games at Mississippi State and perennial juggernaut Alabama. I’m not sure where the points or wins are gonna come from. Are you? #GigEm

The Baylor Bears bounced back from their OT loss at BYU with a 42-7 win over the Texas State Bobcats. Sophomore signal-caller Blake Shapen has looked good at times and bad in others. I’m not sure the Bears look conference championship-worthy this season, but we’re still not even one month in, and I get that.

Baylor plays four of their next six on the road, with top-10 program Oklahoma awaiting at the end of that stretch. They welcome the high-powered OSU Cowboys in two weeks and undefeated Kansas in a month. Did you catch that? Undefeated Kansas. The Jayhawks basketball team isn’t the headline in late September for the first time in decades. Nice work, fellas. The Bears better not sleep on KU. #SicEm

Lots of those national experts predicted that the Texas Tech offense would really challenge North Carolina State in Raleigh over the weekend. That didn’t really come to fruition. Red Raider Nation was excited about the prospect of improving to 3-0, but that record instead was 2-1 as Saturday turned to Sunday.

New head coach Joey McGuire has excited the fanbase for sure, and, like UTSA head coach Jeff Traylor, he’s beloved by his players and community. That’s half the battle in college ball these days. TTU always circles the game they have this weekend: the Texas Longhorns. The game is in Lubbock this year.

Having started my career in Lubbock in 1997, I can tell you this: Tech fans don’t like the University of Texas. At all. They live for this one. They want to beat UT in everything. They have felt disrespected for decades, and I don’t think that sentiment has changed much, although they’ve been much more competitive in every major sport over the last several years. They say strange things happen at Jones AT&T Stadium on Saturday nights, which is why I’m disappointed the game kicks off at 2:30 p.m. Maybe they can start a new tradition? #WreckEm

The Sunbelt Conference stole headlines the first couple of weeks around the nation, but unfortunately for the Texas State Bobcats, they haven’t been that story. They’re 1-2, their lone victory sandwiched by losses that saw them outscored by a combined score of 80-21 against Nevada and Baylor.

I’ve gotten to know head coach Jake Spavital a little bit over the last couple of years, and I’m really impressed with the culture change he’s brought to San Marcos for a program that had been essentially existing and nothing else. They’ve lost close game after close game during his tenure, and feel like they’re close to relevance. But in this results-based business, that’s eventually gonna catch you if you don’t win.

Texas State flip-flops home and road games for the next six weeks, and will need to string some wins together if they hope to be bowl-eligible come December. #EatEmUpCats