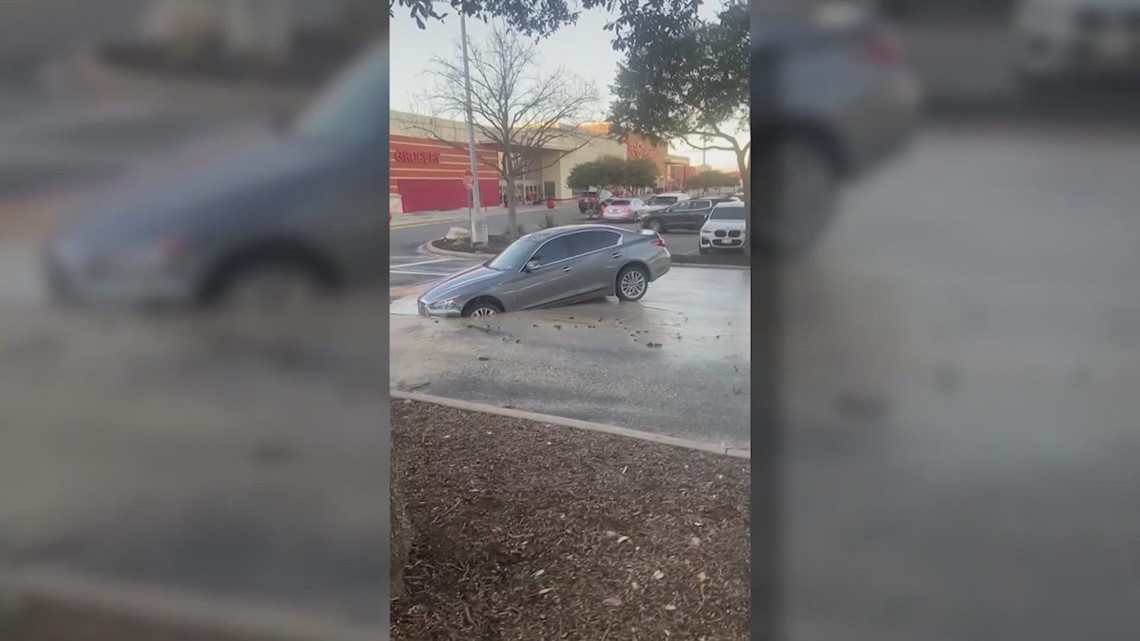 This happened at the Target off of Loop 1604 and Culebra. The driver got out of the car safely.

SAN ANTONIO — A woman driving through an Alamo Ranch shopping center found herself stuck in a hole.

It happened on Tuesday night at a Target near Loop 1604 and Culebra on the far-west side. The entire front end of her car was submerged in a large hole in the asphalt. It looks to be about 5 feet wide, and the driver estimated that it was at least three feet deep. Shoppers shared concerns about what they were calling a sinkhole online.

Chopper 5 flew over the parking lot. From above, you can see that water just gushing down the road. The whole street is now taped off.

At around 5 p.m. a driver thought the puddle was from rain earlier in the day. She kept going to the stop sign and said the road was not closed at the east entrance by Loop 1604. When she saw the caution tape blocking the west entrance near the stores, she tried to turn around. That’s when she says her vehicle got sucked into the collapsed pavement.

The driver, who didn’t want to be identified, sent several videos to KENS 5. At first she thought it was a pothole, but noticed her car kept sinking further. She did get to safety, and SAPD responded. It took about two hours to get her vehicle out of the hole.

There are now shopping carts now blocking the east entrance. The driver said shoppers put those out to prevent other vehicles from coming down this road. And now, it appears property management put up caution tape around the east entrance.

We reached out to Big V Properties, and a spokesperson said this isn’t a sinkhole, it is a water main leak.

The driver said one of her main frustrations was that the hole opened up in the morning and was not fixed or properly sectioned off all day.

We’ve reached out to SAPD for information on the police report and will bring that update when we receive a response.