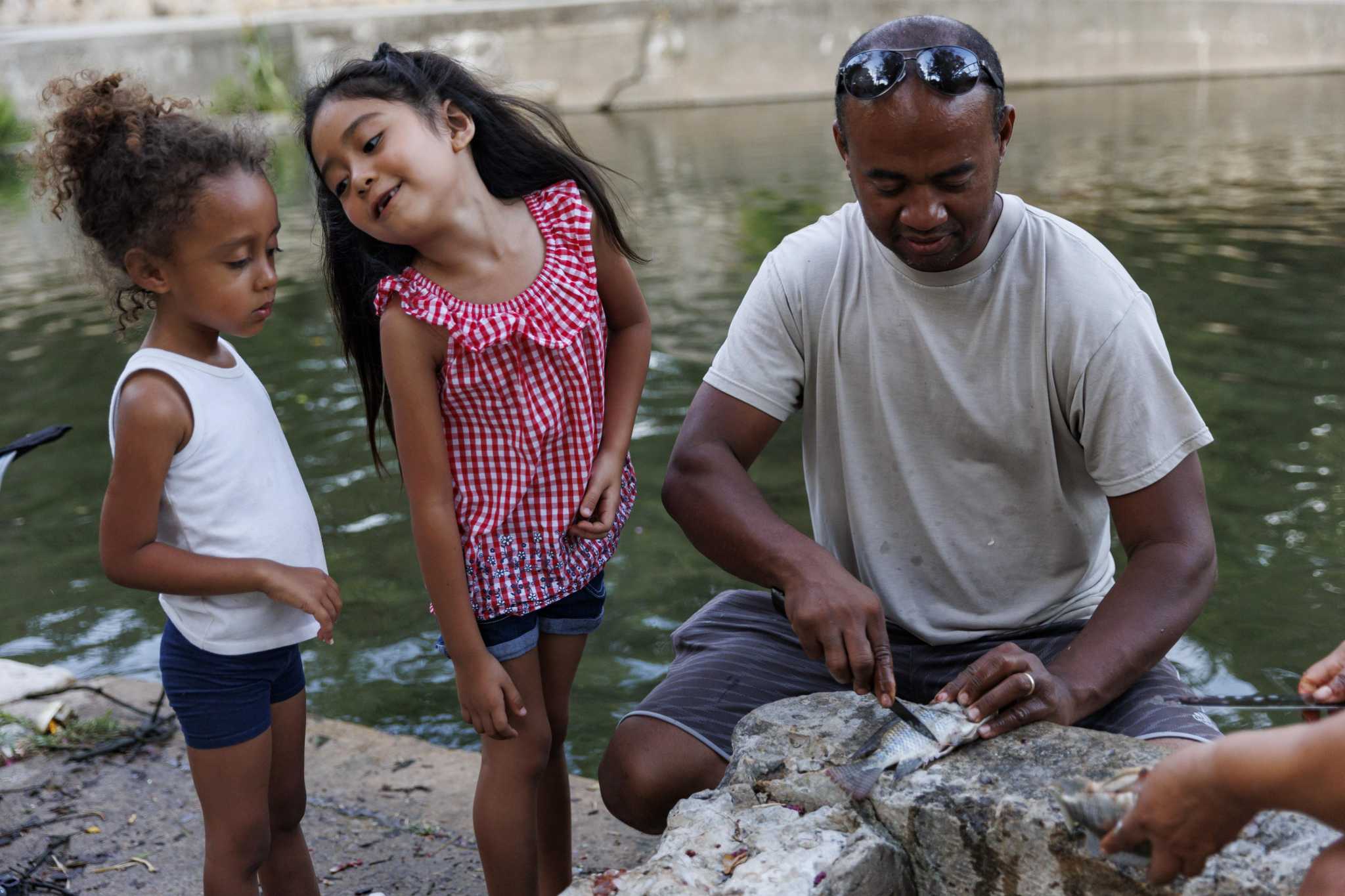 The devastating drought gripping South Texas — while taxing water resources, the state’s power grid and lawns — has at least kept mosquitoes at bay.

Droughts usually wreck mosquitoes’ habitats by drying up moist breeding grounds, such as stagnant pools of water or swampy backyards. With this summer’s sparse rains, San Antonio has fewer spots where these bloodsuckers can swarm and bite people.

Pedro Guzman is more than OK with the paucity of mosquitoes.

He and his family drove from their hometown of El Paso for a few days of relaxation in San Antonio — and time away from West Texas’ drenching monsoon season.

“I have not noticed one bug. It’s been comfortable, thank God,” Guzman said as he fished for talapia in the San Antonio River near Brackenridge Park with his two daughters, ages 4 and 12, a niece and in-laws.

He described El Paso at this time of year, with plenty of rain and humidity, as a mosquito mecca.

Not that the pests have altogether abandoned San Antonio.

“There’s definitely still mosquitoes,” said Molly Keck, a pest management specialist at Texas A&M Agrilife Extension. “But because we’re in drought and there’s no standing water in artificial containers or storage basins and other places where they breed, the population is naturally going to be lower.”

Mosquitoes are attracted to “stink water” — water that’s nutrient-rich with algae, organic matter or debris. A baby pool left unattended in a backyard can attract them. So can dirty gutters after a rain or a child’s toy with contours where water can pool. Some mosquito species also breed in stormwater basins or mucky water that accumulates in ditches, Keck said.

Mosquitoes lay eggs in standing water, where their larvae will live until they can buzz off to start breeding. But without suitable water, the eggs will not hatch, preventing future adult mosquitoes from continuing the cycle.

The current drought has forced many mosquitoes to search elsewhere for stinky water. Some rivers outside San Antonio — waterways that have been receding and experiencing substantial flow reductions — could be more hospitable than usual for mosquitoes as quick-flowing currents give way to standing pools. However, these locations may not be nutrient-rich enough for mosquito eggs to survive.

And if mosquitoes discover puddles suitable for breeding on the dwindling Guadalupe or Medina rivers, they would be too far from San Antonio to bother residents.

At the same time, mosquitoes are not going away. In fact, the record-high temperatures this year — with at least 46 days reaching 100 degrees — partially counter the harm the drought’s doing to mosquitoes.

Heat is conducive to mosquito breeding, enabling them to complete their life cycle faster because their metabolism increases when temperatures rise.

In some species of mosquito, the life cycle — in which a bug lays eggs that hatch new mosquitoes that feed, mate and create new eggs — can be as short as a week.

“This area of Texas is pretty mosquito-friendly all year around,” Keck said. “They tend to find a warmer, more protected area to lay low during the colder months, such as some small spot on your porch. They’ll only die if the freezing temperatures are sustained and they can’t find a place to hide.”

Also, higher heat and faster breeding can increase the number of mosquitoes that carry diseases in Texas. There are 85 mosquito species throughout the state, and at least four of them are known to carry and transmit lethal diseases, such as dengue fever, malaria, chikungunya or eastern equine encephalitis — a very rare but extremely severe disease.

Nevertheless, Keck said temperature is not the most important factor to consider when analyzing mosquitoes. Even as climate change results in hotter temperatures in the future, it won’t matter unless there’s water. So future droughts will tend to keep their numbers down.

“If you don’t have a breeding site, that source for them to lay eggs, then you are not going to be seeing a lot of mosquitoes,” she said.

Elena Bruess writes for the Express-News through Report for America, a national service program that places journalists in local newsrooms. ReportforAmerica.org. elena.bruess@express-news.net