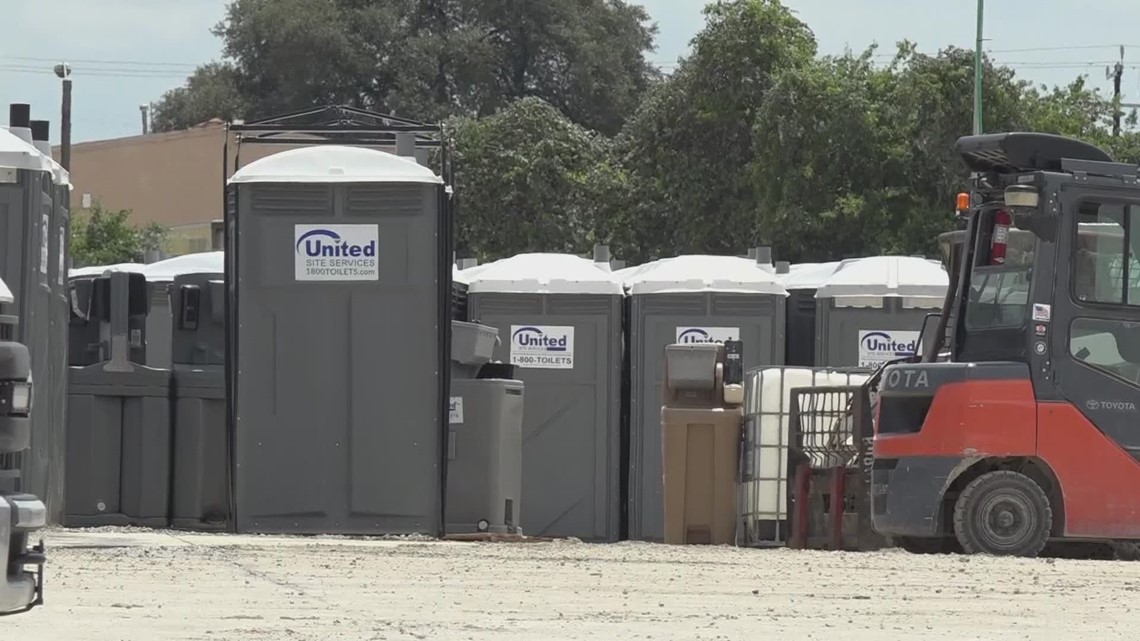 Neighbors say the five-acre parcel that is home to United Site Services on Belgium Lane just east of the AT&T Center is a smelly, unwelcome neighbor.

SAN ANTONIO — One by one they stood to give impassioned pleas, detailing how the smell from a portable toilet business is withering their quality of life.

Besieged east San Antonio neighbors who have been fighting what they call a terrible stench for months won a skirmish this week with the Board of Adjustment.

Neighbors say the five-acre parcel that is home to United Site Services on Belgium Lane just east of the AT&T Center is a smelly, unwelcome neighbor.

The company contends they are operating within the law.

The city’s position is that they are not, and in fact, recently issued a “Certificate of Imminent Peril” to the firm for a series of alleged violations of zoning and city codes dating back to March of this year.

The certificate, issued in October, said the company has failed to cure significant health and safety violations.

Neighbors from the United Homeowners Improvement Association filled the hearing room this week, to detail their complaints.

Oscar Vicks told the panel he has served as the group’s president for more than six terms and has lived in the area 46 years.

Vicks said, “The only thing we understand is that we’re going out in our backyard and bbq’ing and smelling this doodoo. Okay? Doodoo and BBQ do not go together.”

Vicks pointed out the company is only leasing the land and should move on to another parcel that is not adjacent to houses.

Vicks said many of his neighbors are in their 80s and 90s and have been in the area for decades.

Doloris “Mama Dee” Williams lives just 200 yards from the site. She told board members of coming to the area 60 years ago when she was surrounded by farm fields and cabbage crops.

Williams said as the area has grown, newcomers who brought businesses to the area were respectful – until now.

“This is a daily issue causing breathing issues for me and my family. It is impossible to have anyone come over,” Williams said, adding that she can’t even sit outside and enjoy her golden years.

“I do not support any zoning that would allow United Site Services to remain,” Williams said emphatically, adding to applause from the crowd “This would not happen in your neighborhood. Don’t let it happen in ours!”

Speaking on behalf of the company, attorney Rob Killen told the board their position is that they have the proper zoning and permits to operate.

In a letter addressing the controversy, Killen wrote, “It is our position that the property is lawfully operating under its existing ‘I-2’ zoning district.”

Current neighborhood president Alonzo Jones said the battle has been a hard fought campaign for months, but for the 30 or so people in attendance, the victory was a joy.

Jones said he and his neighbors will be vigilant to make sure progress will be made. Jones said if the company decides to appeal to district court, they could be subject to a fine of $2,000 per day.

“It’s an atrocity. They stated they have been here six and a half years, and we’ve been here 60, so that is how bold people are when they feel they can infringe on your rights and your health,” Jones said. “The board did read right through that and realized that these things were wrong and quality of life was a lot more better than someone’s profit.”

“Willie Mitchell said we are human beings and we should be treated like human beings like everyone else and that is something that we are going to make sure happens as long as we’re here.”

The entire November 21 Board of Adjustment meeting is available for review at this link here.