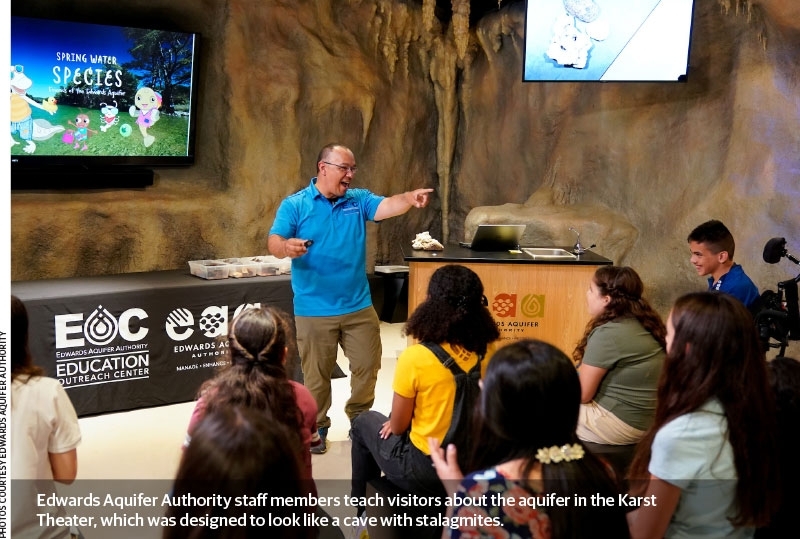 The Edwards Aquifer Authority opened the doors on its $3 million Education Outreach Center in April and so far has had about 1,000 visitors.

Housed in north central Bexar County on the grounds of Morgan’s Wonderland Camp, which was created by San Antonio business leader and philanthropist Gordon Hartman, the EOC is the nation’s first all-accessible aquifer education facility, according to EAA officials.

The purpose of the EOC is to help the EAA further its mission to educate the community about the aquifer, which is integral to providing the area with safe drinking water and is also home to eight endangered and three threatened Texas species, said Ann-Margaret Gonzalez, EAA senior public affairs administrator.

“The aquifer is for everyone, and we need to teach everyone about the aquifer, so it was a great partnership [with Hartman],” Gonzalez said.

For the past 25 years, the EAA has taken aquifer education into schools and to community groups, she said, but then leaders in water management began to talk about what the future might look like. The EAA already has a field research center on the same property, and the idea for the EOC was born after a scientist visited the property in 2019 to study a cave.

Talk of an educational center then became part of the EAA’s Next Generation Strategic Plan, which looks long-range through the lens of innovation, imagination and inclusion, Gonzalez said. •Sarah Valdez, EAA senior science, technology, engineering, art and mathematics educator as well as EOC manager—who manages the day-to-day operations of the center—said the EOC benefits the community by providing a free and safe space to learn about the Edwards Aquifer.

“We all depend on the same clean water. It is the one thing that unites all living things, and now we have a place to learn about it together,” she said.

Less than six months after opening to the public, EAAEOC officials received word in July that their permit application with Texas Parks & Wildlife was approved to house two of the area’s endangered species: the Texas Blind Salamander and the Fountain Darters, Gonzalez said.

Valdez said the planned endangered species aquarium is her favorite feature of the EOC.

“The aquarium [will] provide a soothing and tranquil environment where visitors can be at one with rare and endangered species that are found deep underground,” she said. “It is one thing to look at a photo or a video, but to sit and watch a Texas Blind Salamander move or eat is a rare treat—one that cannot be experienced anywhere else in San Antonio.”