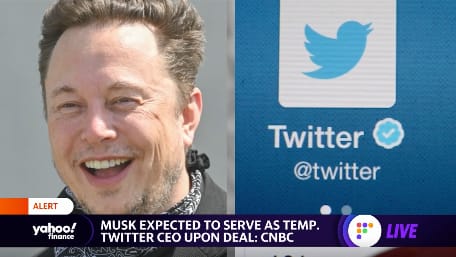 Yahoo Finance Live anchors discuss news that Elon Musk will reportedly be assuming the CEO role at Twitter once the deal goes through.

– A bit of breaking news is coming to us from CNBC, which was reporting that Elon Musk is expected to serve at least as temporary CEO of Twitter for a few months after he takes it over. We don’t know exactly when the deal is going to close. This is according to CNBC’s David Favor. And this as he got some new financing, which we’re going to talk about in just a bit. But the stock is up by 2.7%.

– Great. Good for him. He’s putting billions of dollars potentially of his own money and his own net worth on the line. And you would have to think that Elon Musk who has also been sending Rockets up into the sky, building out Tesla can do a heck of a lot better than the folks over there at Twitter.

Something that I was reminded of– yesterday, I talked at length with Reed Hoffman, who was friends with Elon Musk. And I think we overlook– he’s essentially become tweeter in chief, that is Musk. But we overlook I think some of this guy’s accomplishments and what he’s doing. If you can launch rockets in the skies, you can definitely probably turn around Twitter.

– Tesla shares down premarket 1.4%, though. You got to imagine, how is he going to divide the time up? And if you’re a shareholder of Tesla and you’ve continued to watch that stock climb and then come back down on and through all of the workings of this deal, what does that mean for you?

– I was trying to figure out here, OK, so Tesla, SpaceX– somebody on Twitter reminded me Neuralink is another of his companies. He does serve as CEO of that. I don’t think he’s CEO of Boring Company. But I’m not clear. I’m trying to figure out. It doesn’t say on the website. It’s a privately traded company. But what I will say– and I know you keep assuming if he can do all this other stuff, he can do Twitter.

All of those other things are more engineering issues. Twitter is not. Maybe it is an engineering issue. Maybe it’s a product issue. I don’t know. But they’re not exactly apples to apples. Maybe he’s going to do fantastically well. But I think that this blanket assumption that anything he touches turns to gold, I don’t know if that’s true.

– I see your argument and I raise you this. This guy co-founded PayPal. He’s going back to his roots in software.

– If you could found PayPal, you’d have to think he has some form of idea here for Twitter.

– So that comes back to something I was talking about a couple of weeks back with PayPal, how easy it is for him to say that I can monetize Twitter, low hanging fruit, making transactions possible on the platform, making this an actual competitor to what PayPal already has in Venmo, and making that a more social transactionary platform in Twitter with a larger user base the second you step into a role like CEO.

– It’s a tossup. Ask me in five minutes.

– I’ll tell you some different.