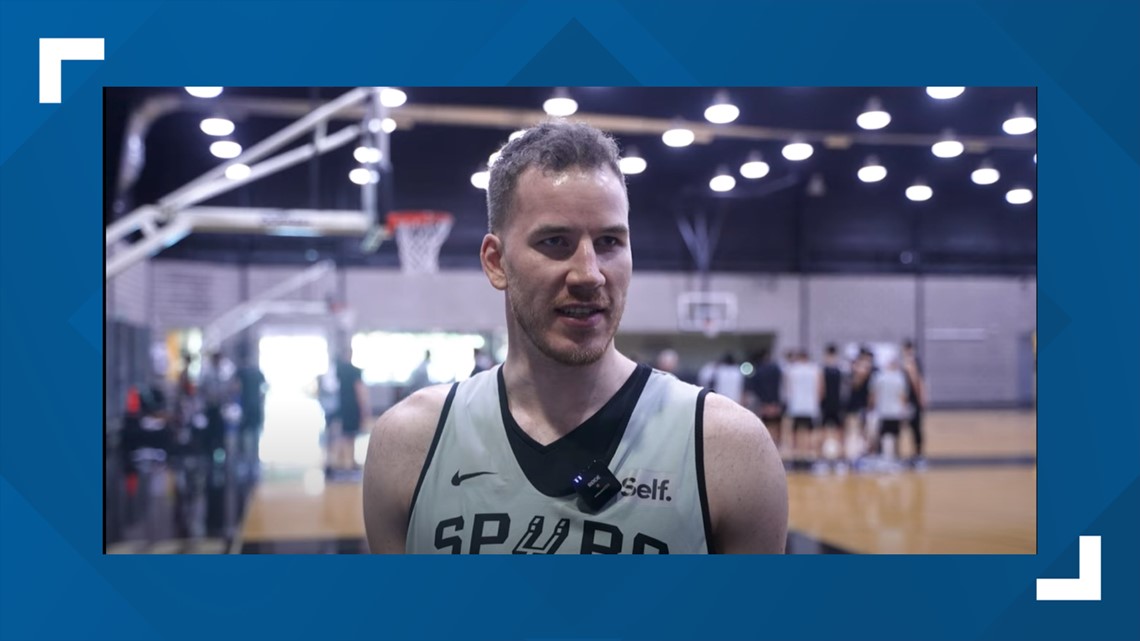 Spurs fans are debating if the team should trade Poeltl or not.

SAN ANTONIO — San Antonio Spurs‘ Jakob Poeltl is having an incredible start to the new season.

He also posted his best game as a Spur with a career-high in scoring in a single game with 31 points and 14 rebounds in a road loss versus Portland on Tuesday night.

However, he is currently in a contract season in San Antonio and could enter free agency as an unrestricted free agent this offseason.

And the Spurs center has spoken on the issue saying he could test free agency this offseason but does enjoy San Antonio.

“That’s why I really enjoy it and I can imagine staying here. The conditions are perfect,” said Poeltl. “I know my own worth. I did that last year and proved that it doesn’t have to be with the Spurs.”

This leaves options for the team: Trade Poeltl now to get something in return or re-sign him. Trading Poeltl this season could net the Spurs a nice haul for their rebuild with his stock up high. He could prove to be a valuable piece for a playoff-bound team.

However, he could also factor into the team’s long-term plans with how great he performs this season.

Spurs fans recently debated this question on social media and the fanbase is very split on the future of Poeltl in San Antonio.

Here’s a sample of what fans are saying:

Resign for sure, he’s not getting worse nor is he slowing down plus he has a good feel with this starting 5 for sure #spurs #spursfamily #SpursMoment # https://t.co/3j0LKsROzK

Only if the deal guarantees the #1 Pick in 2023
Otherwise, it would be a waste of talent. Poetl has vastly improved his game since arriving in SA.
Floater that’s gotta be top 5 in the league (because it goes in at a higher %)
Top 5 Blocks
Offense from nonexistent to Impressive

Sign him if he’ll sign less than 15 per. He can test FA otherwise. We get VW, I’m not paying more for Jakob. We don’t get VW, I’ll give Jakob 20 per if that’s what it takes to keep him. At 15 per we can afford Jakob and VW together, which would be lovely.

As you can see, Silver and Black fans are torn as to what the team should do with Poeltl and his future with the team.

Keep in mind the Spurs do have more than enough cap space to re-sign him in the offseason so thinking he will certainly leave in free agency is premature.

And as one other fan points out, Poeltl ranks among some of the best at his position making his future as a Spur clouded.

What do you think about the situation, Spurs fans? Let us know your thoughts on Twitter at @KENS5 and at @JeffGSpursKENS5.