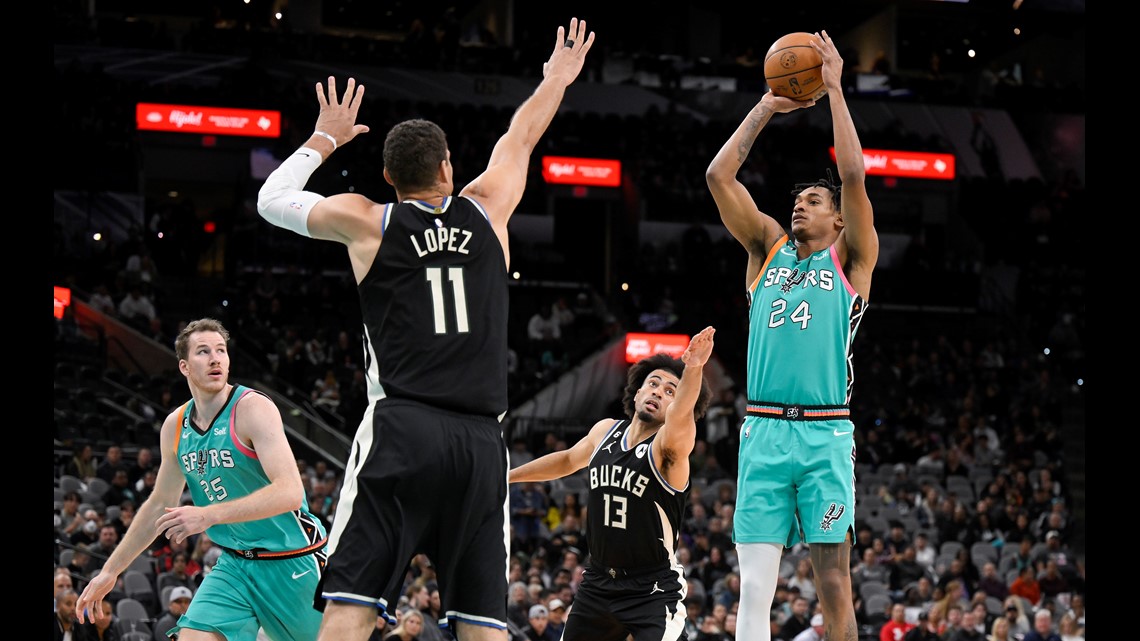 The Spurs snapped a five-game skid against a Milwaukee team that rested key guys. Keldon Johnson led the way with 29 points.

SAN ANTONIO — The San Antonio Spurs moved to 6-7 with a win over the shorthanded Bucks on Friday night.

The Spurs snapped a five-game skid against a Milwaukee team that rested key guys. Keldon Johnson led the way with 29 points and plenty of other Spurs stuffed the stat sheet.

Jakob Poeltl opened the game with a tone-setting block if there ever was one.

Devin Vassell said he’d be in the gym working after missing the game-winning three in overtime on Wednesday night, and wasted no time getting on the score sheet with a pull-up jumper. Jakob Poeltl tipped in a miss, then Tre Jones ripped a steal and fed Vassell for a cram and a 6-0 lead.

Poeltl blocked a layup and Jeremy Sochan, sporting fresh pink hair, streaked from coast to coast for a bucket. The shorthanded Bucks got out to a three-point lead, then Keldon Johnson ripped the strings from deep to tie it. Jones floated one in, then dimed Poeltl.

When the bench unit came in, Doug McDermott found Josh Richardson for three and then hit one of his own. Richardson hit a fader on the baseline through a foul.

Vassell hit a short jumper, and new Spur Charles Bassey tipped it in when he missed the next one.

Romeo Langford got in on the scoring, and he’ll likely continue to play a bit as Blake Wesley recovers from an ACL sprain. Poeltl scored inside, where the Spurs seemed to have an advantage in this game.

Sochan found Doug for a McBucket, then finished an alley-oop layup on a feed from Jak.

Poeltl got it to Keldon for a triple, then finished in close when Johnson returned the favor a few possessions later. Johnson got fouled beyond the line and hit all three free throws. The next trip down, he swished a pull-up three to put San Antonio up 11.

Charles Bassey hit McDermott on a lovely backdoor cut, then closed the half with a block.

The Spurs led 54-46 at the break. They had 11 assists and 10 turnovers, not quite what you’re looking for. They only hit five triples, but outscored the Bucks 28-8 in the paint.

Tre Jones started the half with a triple on an assist from Keldon, then Jones fed Vassell for another deep one. Jones got it ahead to Sochan for an oop in transition, and then another dunk.

Poeltl fed Sochan who made the extra pass to Johnson for an easy three, then Poeltl scored on an and-1. Jones got it to McDermott for yet another triple, and Milwaukee called time down 21.

Squad is going crazy in the second half ‼️ pic.twitter.com/3UOPyuCq28

The Bucks ripped off a 15-2 run, starting with a barrage of threes. San Antonio held an 83-76 lead heading to the final stanza.

The defense ramped up, and Bassey blocked an attempt from the arc to force a shot clock violation. Devin hit a three, then a pull-up to put the Spurs back up double digits.

Keldon drove for free throws, then got in for a bucket, then hit a three as the crowd at the AT&T Center roared. Next, he drove for an and-1 and talked some noise.

KELDON JOHNSON IS HIM pic.twitter.com/5I2TZDohmo

Jones hit Poeltl for a layup that put the Spurs back up 18. Johnson put an exclamation point on it with a transition dunk, and the starters came out with the win secured.

Johnson finished with a team-high 29 points, and Vassell added 22. Poeltl chipped in 15 points, 10 boards, 3 assists and 3 blocks, and Tre Jones had 9 points, 9 assists and 5 rebounds.

San Antonio moved to 6-7 on the year.

The Spurs are coming off a 124-122 home overtime loss against the Grizzlies.

Devin Vassell and Jakob Poeltl each had 22 points to lead the team while Keldon Johnson added 16 points. Tre Jones finished with 11 points and 11 assists while Jeremy Sochan recorded 13 points.

“Great game. I thought our guys were fantastic against a heck of a basketball team,” Gregg Popovich said. “To play them the way we did tonight feels really good. You’re always disappointed when you lose but there’s so many good things. These guys are growing.”

RELATED: Grizzlies 124, Spurs 122: What they said after the game

The Spurs will debut their new City Edition jerseys tonight.

1. The Spurs have been out-rebounded in five-straight games.

2. The Spurs are 5-1 this season when they hand out more assists than their opponent.