Florence H. Skruhak passed away peacefully at her home in San Antonio early Wednesday morning, July 20, 2022, just five weeks short of her 101st birthday. She was born in rural Gillespie County near Fredericksburg, Texas, on August 28, 1921, to Edward Hartmann and Clara Jenschke Hartmann. One of nine children, she attended the Rocky Hill country school and even posted articles to the Fredericksburg newspaper as a special correspondent reporting on the school’s 4-H activities. As happened to so many others during the Great Depression, her father lost their farm and became a tenant farmer, working the land that belonged to others in return for keeping a percentage of the crop. It was hard work, but everyone pitched in to help — even if it meant picking cotton. Later, Florence fell in love with A. J. Skruhak, a handsome US Army Air Forces corporal at Kelly Field who had grown up on a farm near Granger, TX. They married in 1942 just months after the start of World War II. TSgt Skruhak, by then a flight engineer, was at a B-29 base on Guam when their first child, Sharon, was born in 1944. A son, Wayne, followed in 1947. In the next decade, the Skruhaks had four more boys: Ricky, Robert, Dennis, and Mark. Florence was a full-time mother to their six children. Her husband died suddenly in 1975, and she never remarried.

Instead, Florence rediscovered her love of drawing and painting which she had set aside while raising a large family. Over the decades she painted many beautiful scenes and was always flattered when family members requested a particular painting of hers to hang in a prominent place in their homes. Florence traveled the world, and her photographs taken while on holiday — especially those in Mediterranean locales — made fine subjects for many of her canvases. Her travel adventures took her to places as varied as North Africa and the former Soviet Union and Soviet bloc countries. She enjoyed foreign train travel, as well, including Mexico’s spectacular Copper Canyon, a transcontinental rail tour of Canada, and a memorable excursion aboard the famed Orient Express. Florence took her first cruise in 1979 and subsequently toured many destinations in Alaska, Hawaii, and throughout Europe. A Danube River cruise with family was a particular favorite. Of all her travels, however, the very best times were spent visiting with her brothers and sisters in the Texas Hill Country, and with her sister Mag in California.

At home, Florence enjoyed an active life revolving around her family, her parish, and her volunteer work. The Skruhaks were one of the founding families of Blessed Sacrament Catholic Church over 65 years ago, and the parish remained the center of her life until the last year or two as her health declined. A devout Catholic, she was a member of the Altar Society and helped clean the church for decades alongside the other dedicated ladies. She delivered Meals on Wheels until her 90th birthday, enjoyed playing cards with her friends at the Hogan House, and was a longstanding member of several Czech and German fraternal organizations including the KJT, the KJZT and Hermann Sons. She loved visiting with her grandchildren and great-grandchildren.

The family wishes to thank the dedicated people of VITAS Hospice Team #566 and Sisters Care (especially Carolyn Thornton-Murray, Maria Zepeda, and Elida Perez) all of whom made it possible for our mother to remain comfortable in her own home.

Fr. Christopher Muñoz will officiate, and livestreaming will be available for those unable to attend. Live stream link for Funeral Mass from Parish website for those that do not have a Facebook account: https://www.blessedsacrament.church/. Live Stream from Facebook: https://www.facebook.com/blessedcatholiccommunity. Interment will follow at Fort Sam Houston National Cemetery at 1:30 PM following the Mass. Pallbearers will be Nick De La Rosa, Christian T. Malone, Thomas G. Simmons, Aaron J. Skruhak, Chris L. Skruhak, Christian J. Skruhak, and R. Lindy Skruhak. In lieu of flowers, memorial contributions may be made to Meals on Wheels San Antonio, 4306 NW Loop 410, SA TX 78229, or the charity of your choice.

You are invited to sign
the Guestbook at
www.porterloring.com 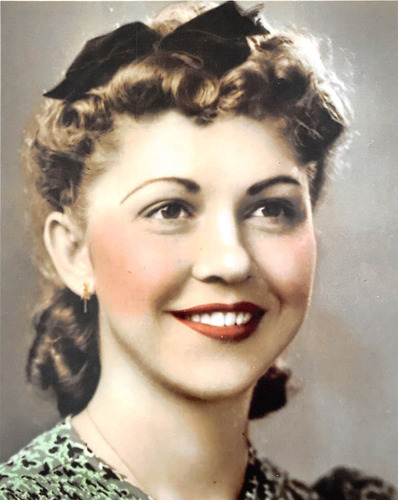