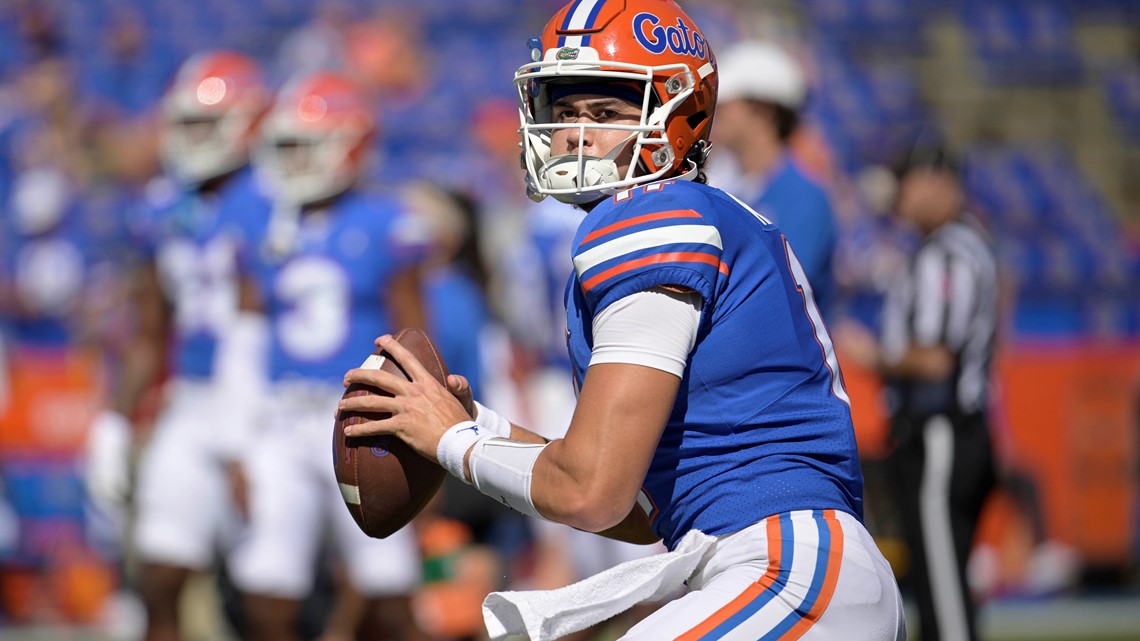 The Gainesville Police Department arrested Jalen Kitna on charges of distribution of child exploitation material and possession of child pornography.

GAINESVILLE, Fla. — Former Burleson High School quarterback Jalen Kitna has been arrested on charges of distribution of child exploitation material and possession of child pornography, according to police in Gainesville, Florida.

Kitna is currently the backup quarterback at the University of Florida. The team announced Wednesday that Kitna has been suspended indefinitely.

Kitna started his high school football career playing for a high school in Phoenix before transferring to Burleson High School in 2019. His dad, former Cowboys quarterback and quarterback coach Jon Kitna, became the head coach of Burleson, as well. Jon Kitna is still coaching the team.

The investigation was initiated when Gainesville police received a cyber tip from the National Center for Missing and Exploited Children.

Further investigation revealed two images were shared, through Discord, from Jalen Kitna’s account, according to police.

When detectives interviewed Jalen Kitna at his home, police said he told them he remembered sharing the two images but believed them to be “legal,” since he found them online.

Jalen Kitna said he realized he should not have shared those two images, based on the reaction from the other Discord user that he shared them with, police said. Jalen Kitna also said he received an email from Discord stating that his account was deactivated due to violation of the terms of service.

Jalen Kitna’s electronic devices were seized as a part of the search warrant, according to police. Preliminary analysis of the devices allegedly revealed three additional images of child sexual abuse material. The Gainesville Police Department arrested Jalen Kitna for two counts of distribution of child exploitation material and three counts of possession of child pornography.

“We are shocked and saddened to hear of the news involving Jalen Kitna. These are extremely serious charges and the University of Florida and the UAA have zero tolerance for such behavior.

Jalen has been suspended indefinitely from the football program.”

Through four games of the 2022 college football season, Jalen Kitna appeared in four games, including Florida’s 52-17 win over Eastern Washington when he had 152 passing yards and a touchdown.

During his senior year at Burleson during the 2020 high school football season, Jalen Kitna led the team to a 6-4 record while having 2,566 passing yards and 33 touchdowns.