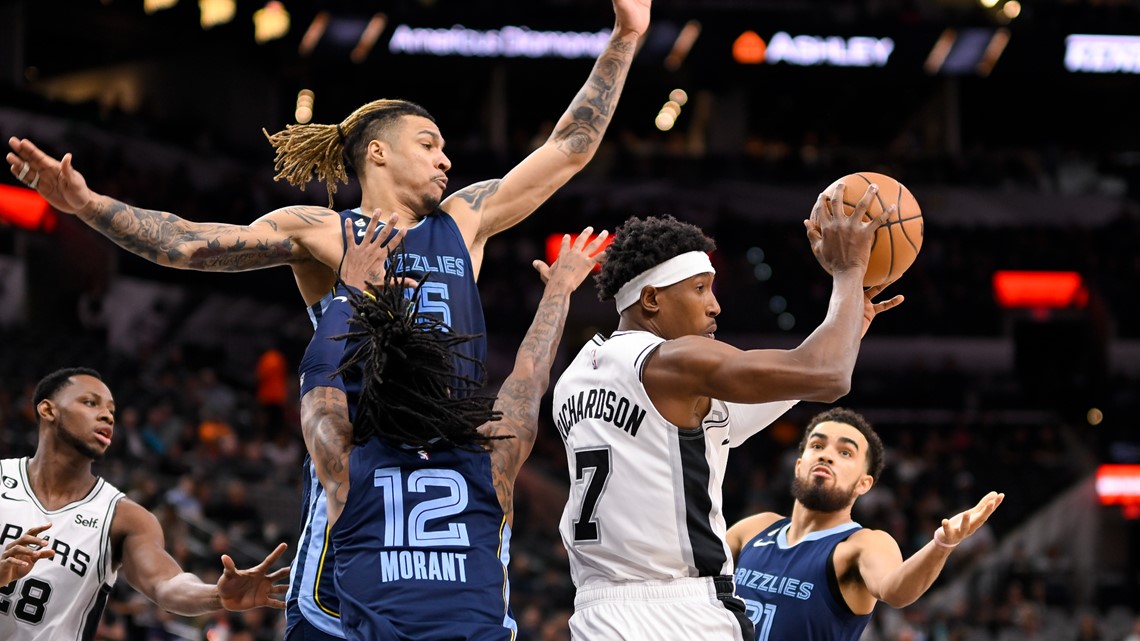 In the absence of a ball-stopping star, Gregg Popovich has his young squad flying around and playing for each other to create offense in a throwback to 2014.

SAN ANTONIO — The rebuilding Spurs may not have a heliocentric superstar, but that means they’re bringing the Beautiful Game back to San Antonio.

Gregg Popovich’s scrappy young squad currently leads the NBA in assists per game with 30, and a league-leading 70.7% of their baskets come off a dime. It’s a big part of why they’ve outperformed expectations 12 games into the season, and the teamwide selflessness was on full display in an overtime thriller against a stacked Memphis Grizzlies team Wednesday night.

One play in particular got people thinking about that iconic 2014 Spurs run that many consider to be the pinnacle of team basketball. It was early in the second half, and San Antonio’s starters put on a clinic for moving the ball and the players to create a good shot, and then a great one, by making quick decisions after every single pass.

Is that… is that the beautiful game?pic.twitter.com/f6xnOLuxzD

Tre Jones brought the ball up and ran a pick-and-roll with Jakob Poeltl, quickly passing it to Devin Vassell on the right wing. Vassell immediately swung it to rookie Jeremy Sochan in the right corner, who drove toward the middle of the floor and drew the attention of Steven Adams in the paint.

Adams’ man was Poeltl, who cut from underneath the basket toward the right side that Sochan had just cleared out and took the pass. The big man dribbled up toward the three point line on the right wing, faked a handoff to Devin Vassell, who cleared to the corner, and passed to Keldon Johnson at the top of the arc. Johnson dribbled around Poeltl’s screen and drove toward the basket as Poeltl rolled.

At this point, all five Memphis defenders were on the right half of the floor, and all of them were watching the ball. Johnson jumped and skipped an overhead pass all the way to the left corner, where Sochan was wide open because his man was stepping in to limit Poeltl’s roll.

Sochan could’ve let it fly, and he hasn’t been afraid to take quality shots in the flow of the offense. But Desmond Bane was flying in for the closeout, and Sochan has only hit 21% from deep. The rookie looked at the rim, then swung it to Bane’s man, Tre Jones, who was open next to him on the wing.

Jones made a quick fake and drove middle past Bane, forcing Adams to step up and prevent the layup. As soon as he did, Jones hit Poeltl under the basket for an easy reverse layup. It doesn’t get much more high-percentage than that.

Every Spur touched it. After Jones started the play, there were seven dribbles and seven passes resulting in two of the most beautiful points you will ever see. It wasn’t a set play; it was fluid and living and breathing. Each guy read the defense and reacted in a perfect example of the offensive philosophy “.5” where players make a decision to pass, dribble or shoot, and do it within half a second of catching it.

As the play made the rounds on Twitter, it resonated with people who love the game of basketball. Spurs fans reminisced about the team’s most recent title run, and fans of other teams that run a more isolation-heavy style yearned for something more like this. Plenty hailed Coach Pop as a master of his craft.

This may have been the best example, but the Spurs have made plenty of plays like this to start the young season. They have to.

In 2013 and 2014, San Antonio’s offense looked very similar, albeit with future Hall Of Famers running it instead of an unheralded group of youngsters. They throttled LeBron’s Heat in a dominant Finals win to avenge 2013, and laid out a blueprint that the Warriors made their own in their era of excellence.

Pop is most known for the Beautiful Game style, but the truth is he has adapted his coaching strategy to fit the personnel since he started. That balanced attack fit for a team that talented at all positions, but it wasn’t always like that. He came in playing post-heavy with the Twin Towers of Duncan and Robinson, then went to more of a pick-and-roll style as Tony Parker and Manu Ginobili grew into stars.

As Kawhi Leonard came into his own as a primary scorer after 2014, Pop shifted the offense away from constant movement toward an attack that put the ball in his star’s hand and let him work with it. Leonard was a worthy MVP candidate in 2017, putting up over 25 a game and locking down on defense for a 61-win team. It looked like they could’ve beaten the Warriors in the playoffs before Zaza Pachulia took him out. That season, Leonard finished about 3 isolation possessions per game and 5.6 as the pick-and-roll ballhandler.

When Kawhi left the team, the roster and style was still built around a generational bucket getter on the wing. DeMar DeRozan filled the role as best as he could, but it was a clunky fit with LaMarcus Aldridge, who also liked to stop the ball and do his thing in the post rather than pick and pop to create space for everyone. That pairing ended without a playoff series win in their time together.

With both of them gone last season Dejounte Murray grew into an All-Star point guard for the Spurs and initiated most of the offense, but again San Antonio watched the postseason from home.

After trading Murray for picks in the offseason, this team does not have a clear-cut top option on offense for the first time since 2014. Jones is a solid pass-first point guard, and Keldon and Devin have both taken serious leaps as playmakers, but none are currently guys who you’d want to clear it out and let them cook as the main source of bucket creation.

That means that the best way for this team to score is to do it as a team, and Pop has been coaching his guys to do just that.

San Antonio passes the ball an average of 306 times per game this year, which ranks sixth in the NBA. Last year, they were near the middle with 289. The year before that they averaged 262, third-fewest in the league.

These Spurs have registered just 1.9 isolation possessions per game, which is by far the fewest and nearly half as many as the team ranked 29th. It’s the lowest number since the 15-16 season, which is as far back as the NBA’s stats on this go. 41 individual players average more isos per game this season than the entire Spurs team.

Conversely, San Antonio runs more handoff plays than every team except the Kings. An average of 32 of their possessions per game end with a spot-up shot, by far the most in the NBA. They rank second in terms of the number of possessions that end on a cut. The Spurs also average the third-most turnovers this year, but that’s to be expected with a young team that passes this much and is still working out the kinks.

In the absence of a ball-stopping star, they’re looking for simple actions that use movement and multiple players to create an advantage. It’s hard to imagine a better environment for these young guys to learn and grow under arguably the best coach in the history of the sport. Grizzlies coach Taylor Jenkins is a graduate of the school of Popovich himself, and had nothing but good things to say postgame.

“Obviously, compete is one of the standards in San Antonio. They get the right guys in. They’re going to set a tone. Young guys, Josh Richardson coming off the bench, Doug McDermott coming off the bench, they find Bassey, who gave us problems tonight. Then their starters; they have great chemistry. They ended up getting 30. It’s just how hard on offense they move without the ball. They play the roles really well, they’re very unselfish, so that makes it really hard on the defense to keep up with them,” he said, adding that every time his guys face off against San Antonio, it will hopefully make them better.

The Spurs are 5-7 after Johnson missed a good look at the end of regulation and Vassell’s shot for the win came up just short at the overtime buzzer.

“I’m living with that,” Vassell said after the game. “Keldon and I put in so much work in this summer. We’ve developed and have stepped into bigger roles. This is what we asked for. We come down the stretch, and I had no problem with Keldon taking that shot, and he had no problem with me taking that shot. It’s all in building confidence and building trust. We’re a young team. To play against the Grizzles, who is a great team, and to be able to fight like that and go into overtime with them is great. We had two shots that were right there. It just shows a testament to our team and how hard we’ve been battling. We’re right there. We just have to stay together.”

If the early returns are any indication, togetherness won’t be a problem for this team. For fans of the Beautiful Game around the world, it’s beautiful to see.