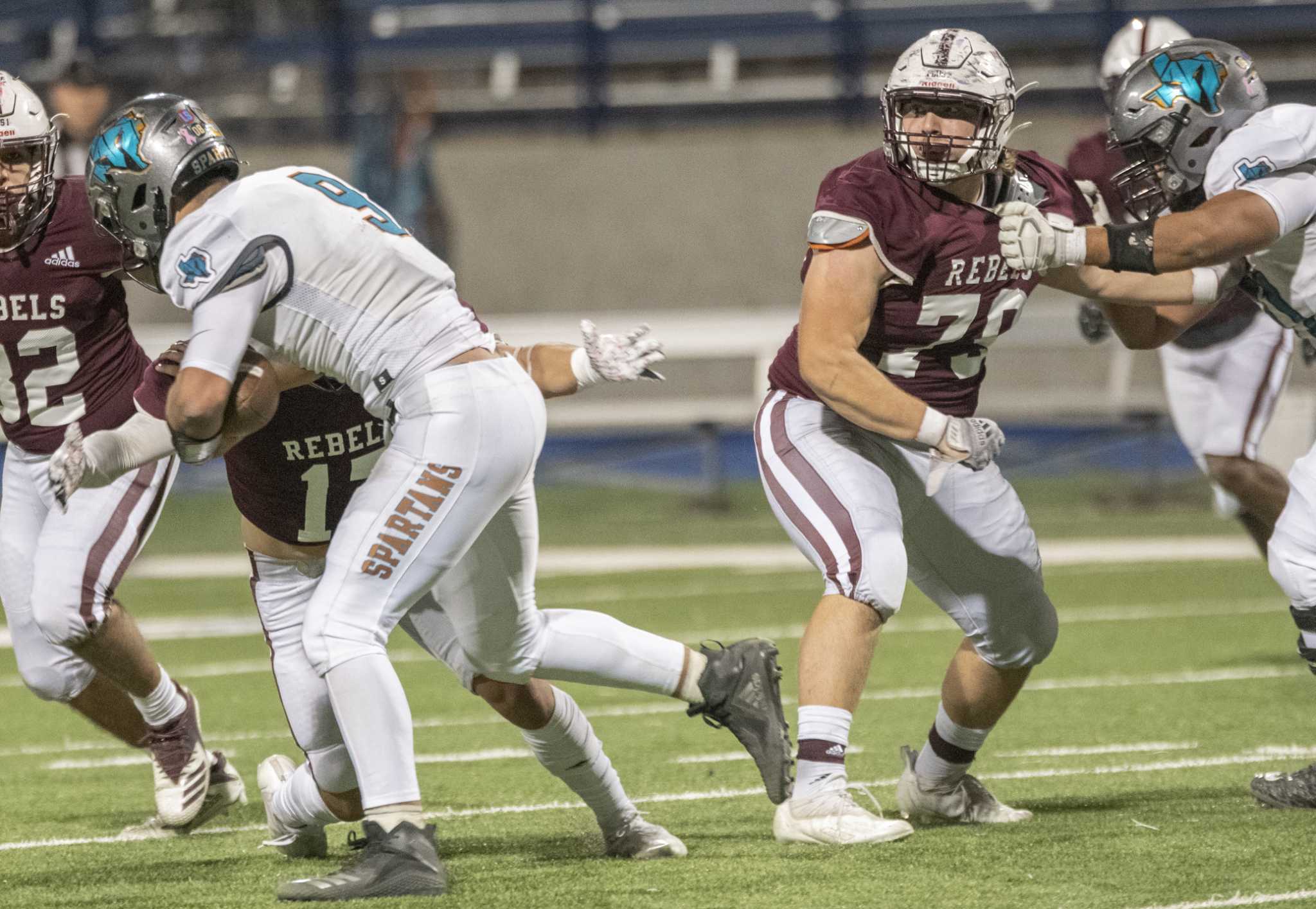 The 6-foot, 255-pound Barton is a disruptive force that creates misery for opposing offensive linemen.

When he’s on the sideline, Barton is distinct too, as he sports a mullet, a hairstyle he has been rocking since his freshman year. He says it suits his personality.

“Business in front, party in the back,” Barton said. “That’s how I play.”

Barton is all business when he steps on the field, as the team captain shined last year with 56 tackles, nine tackles for loss, five sacks, seven quarterback hurries and a fumble recovery.

In two games this year, Barton has made an impact with 14 tackles, two tackles for loss, one sack and two quarterback hurries, including a 10-tackle performance in a 35-28 overtime loss to No. 8 Cibolo Steele last week.

Barton and the Rebels (2-2) travel to face a prestigious Converse Judson program (1-3) for a 7:30 p.m. kickoff on Friday at D.W. Rutledge Stadium in LHS’ final game before district.

Barton keeps the mood loose around the Rebels’ locker room, but he knows when to flip the switch and be businesslike.

“I like to bring the team up,” Barton said. “I guess not really mess around but when it’s game time you lock in. But when you’re sitting there, I like to joke around with some of these guys. It’s fun and when it gets serious, it gets serious. But you’ve always got to have some fun.”

Legacy head coach Clint Hartman says Barton is a fun kid that he likes to joke around with on the practice field.

Joking aside, Hartman says Barton shares common traits of all the great players at LHS, which includes never missing workouts, being on time and buying into the process.

The Legacy coaching staff will rotate bodies in and out of the defensive line to keep them fresh, but Hartman says Barton doesn’t get subbed out.

“He’s hard to get a push on,” Hartman said. “At the point of attack, running at him is harder than most. It’s been fun to watch.”

Barton has the skill set to play both the 1-technique and 3-technique tackle in the Rebels’ interior, but this year he has been mainly lining up on the outside shoulder of the guard as a 3-technique. Barton says he has mostly avoided double teams so far because of the switch to 3-technique.

“You’ve got to play with aggression,” Barton says of playing defensive tackle. “A lot of grit goes into being a d-lineman. I’ve heard it from (defensive line coach Eric Langehennig) that I have a lot of grit and that’s what I like about myself. I’m a gritty person is how I should put it.”

During the preseason, Barton suffered an injury scare when he suffered a bucket handle meniscus tear in the interior of his knee. Barton feared that his high school football career may be over.

“They told me that they would have to do a six-month recovery if they did the full repair,” Barton said. “But I love this team too much to do that, so I took the shaving (surgical procedure), which is a two-week recovery. It took me two weeks. I’m glad to be back. It really opened my eyes who I really am and how quick this can be taken away. I think I made the right decision in taking that (shorter recovery). I think that was the best decision that I made as a football player.”

“The football gods, like Coach Hartman says, they’re always there for you when you need them and they’re always there for you when you don’t want them,” Barton added. “But I think they were really there for me, and I think Jesus was there. I had put a lot of hope in this team, and it hurt to get it taken away like that. I think it feels great. I have more determination than I have ever have. I go out to practice every day with a good attitude and I had to keep that attitude. It just feels so great when you’re finally out there and you’re finally out there and I get to play the sport I love that I want to play for another four years. I’m very grateful for that.”

Barton, who also sings in the Legacy choir, is now focused on helping the Rebels end their non-district slate on a winning note Friday when they visit a talented Rockets team that has their share of future Division I players.

Last meeting/series: Judson def. Lee 35-21 in 1983 Class 5A state championship in only meeting.

– Six-time state champion Judson is trying to get back to its glory days under first-year head coach Mark Soto. The Rockets have used three different quarterbacks with senior Jaden Castillo, senior Andres Villagran and sophomore Elijah Favela. Hartman says Castillo, who got injured in the first game, is mostly a running quarterback, Villagran is a pocket quarterback and Favela is mobile and can throw.

–Hartman says Judson throws the ball 70% of the time and has a talented receiving corps, so it will be a good test for Legacy’s experienced secondary, highlighted by Arizona pledge Canyon Moses. Hartman says Rockets junior receiver Michael Avery looks just as good on film as Evans III.

–LHS junior Marcos Davila needs one touchdown pass to tie Caden Coots for second in career touchdown passes with 42 in the history of the Rebels’ program.

–The Rebels face their second prestigious San Antonio-area program after losing in overtime to No. 8 Steele last week. LHS looks to end its challenging non-district slate with a win and an above .500 record after also losing to No. 10 Amarillo Tascosa (48-27).