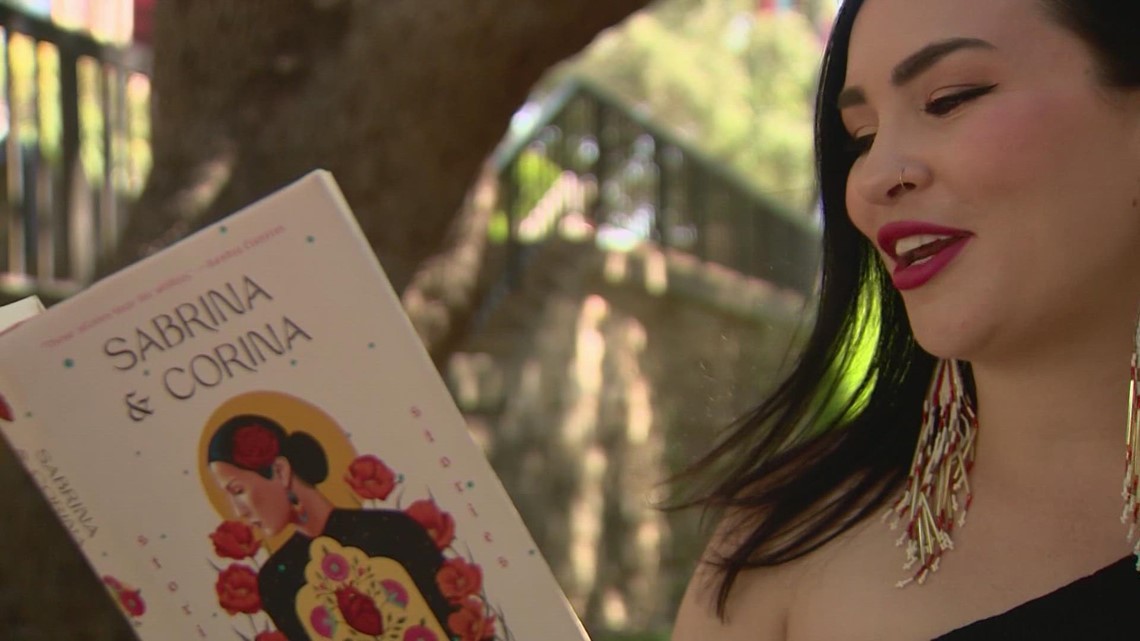 The Denver native has made her way to San Marcos, where she is the Endowed Chair for Creative Writing at Texas State.

SAN MARCOS, Texas — It is a hot morning, as the sun peeks through the trees at Texas State University. Sitting in the shade, Kali Fajardo-Anstine reads from her best-selling novel, “Woman of Light.”

Her voice fills the pathway as a few scattered students make their way to their next class. The words are spoken with passion, visualizing scenes from the American southwest.

“She considered her collection of guns before reaching for her Remington shotgun,”Fajardo-Anstine reads. “Hoisting the familiar weightiness of its Damascus double barrel.”

Fajardo-Anstine’s ensemble embodies the place from which she hails. A turquoise and silver bracelet sits on her wrist, while white and red beaded earrings dangle from her ears.

“I always wanted to be a writer. Since the time I was a really little girl,” Fajardo-Anstine said. “I come from this really big multicultural Mexican-American family in Colorado and they told enormous stories.”

The author said her biggest inspiration is her family.

“My great grandma Esther and my Auntie Lucy–they came north to Denver from southern Colorado in the 1930s. And they just told these incredible stories of triumph. They picked grapes. They picked beets in the the fields,” she said.

She knew she wanted to see these stories told to a bigger audience.

“I had a hard time finding our stories in literature,” Fajardo said.

Her debut novel, “Woman of Light” was released in June of this year. The novel is a bestseller, and has been selected for various book club picks.

The novel follows Luz Lopez, a laundress and tea reader. After her brother is pushed out of Denver by a mob of white supremacists, she must navigate 1930s Denver on her own.

Fajardo-Anstine’s aunt Lucy is inspiration for the main character.

“I just sat down and I thought about what were the emotions like for my great grandma and my aunties?” she said.

“After I wrote a whole book, I realized I didn’t have enough information. I needed to do research,” Fajardo-Anstine said. “So slowly I started going into archives, going to museums, but often I found that our stories were not in these institutions. So I started interviewing a lot of my elders in their homes.”

In a voice recording Fajardo-Anstine provided to KENS 5, a conversation plays between Fajardo-Anstine’s mother and her great-grandmother, Esther. In it, Esther describes her mother’s journey to Denver after her husband abandoned her.

“She walked to Denver… Of course in those days people would give you a ride,” Esther recalls in the recording.

Kali’s mother took the recordings when Kali was a little girl.

“And I remember listening to them and just feeling just chills all over my body. For one, I got to hear my great grandma’s voice again. It had been so long, but she was talking about some very serious things,” Fajardo-Anstine said.

In her research, the author realized there were some things that hadn’t changed, even after 80 years.

“One of the threads of the novel is an attorney, and he’s working on a police brutality case for a young Mexican-American man who’s been murdered by the police,” Fajardo-Anstine said “I was really surprised when i found so many instances of organizing and activism in the 1930s.”

Like her ancestors, Fajardo-Anstine has her own story of triumph. She described being a struggling student, dealing with depression. She said her grades had been terrible for many years. The author recalled begging to be in an Advanced Placement English course, but the teacher had given her an ultimatum–if she missed class, she would get kicked out.

After a bout of depression following an event in her personal life, Fajardo-Anstine slept in one day, missing class.

“I went to school and the teacher right away said she need to pull me out into the hallway,” Fajardo-Anstine said. “[She said] ‘if I were you, I would drop out.'”

It wasn’t long, however, before she went back. Fajardo-Anstine received her GED from Metropolitan State University of Denver.

“My relationship with education totally changed after that moment… I suddenly saw myself in textbooks!” she said.

She went on to get her master’s and wrote her first book, “Sabrina and Corina,” a collection of short stories. The collection was selected as a National Book Award Finalist.

When the book was first released however, Fajardo-Anstine said it didn’t receive a lot of recognition. She knew she wanted to reach different communities, so she reached out to the San Antonio City Council to set up a visit. They wrote back and agreed, helping her host a class and reading.

“I came and I spoke at San Antonio College and it was during Fiesta” Fajardo said. “And I was just like, ‘this is most beautiful and like enchanting city I’ve ever seen!’ So San Antonio has retained a very special place in my heart.”

“They may be gone. I visit their graves and this is one way of visiting their graves and talking about them,” Fajardo-Anstine said. “The future generations of my family will always have this novel and there’s so many families that have similar backgrounds, and I think they’ll really connect to the characters and “Woman of Light.'”

For more information on Kalie Fajardo-Anstine and her work, visit her website.