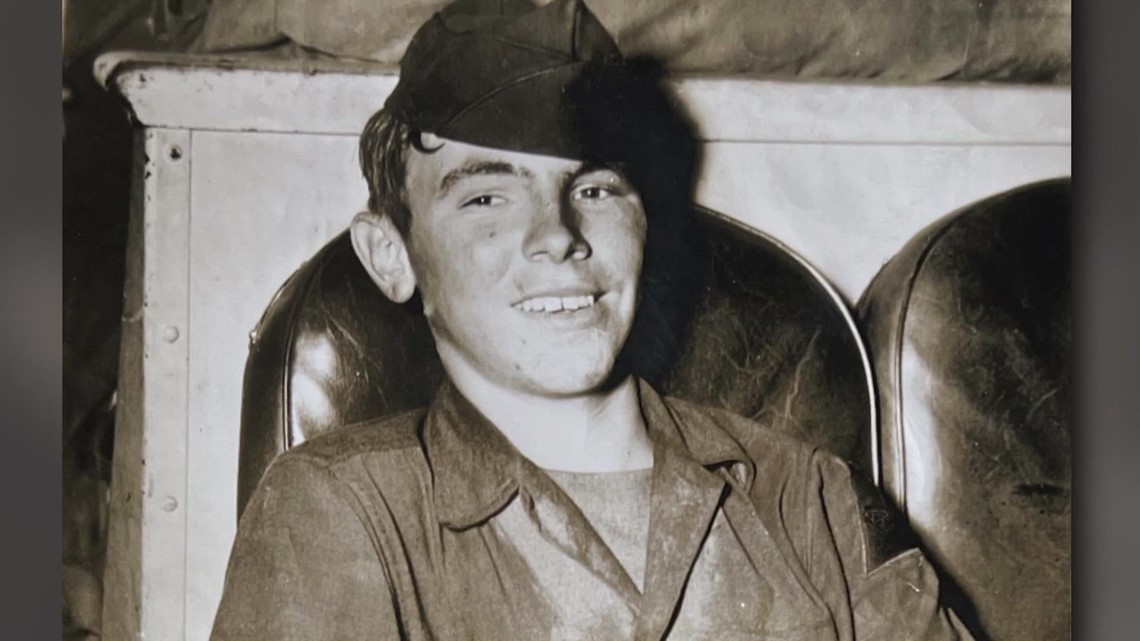 After finishing 7th grade in 1944 he signed up for the draft, claiming to be 18. At six feet tall, no one questioned his age. He was in fact, only 13 years old.

SAN ANTONIO — On this Veteran’s Day we are honoring the youngest living World War II veteran. Like many Americans, Bob Kelso signed up to fight in World War Two. But – he was only 13 years old. He was sent into battle and wounded – one of the youngest Americans ever to receive the Purple Heart.

In buildings across San Antonio you will see the names Bob Kelso and his late wife Betty. They have donated millions to local schools, museums and medical research. But Bob Kelso didn’t grow up wealthy.  Born in 1930 to Oklahoma farmers, his parents divorced and Kelso grew up bouncing between his parents and foster homes.

After finishing 7th grade in 1944 he signed up for the draft, claiming to be 18. At six feet tall, no one questioned  his age. He was in fact, only 13 years old. His motives weren’t purely patriotic!

“You had to be a certain age to buy beer,” Kelso said with a laugh.

Kelso didn’t have much time to enjoy that beer.  He was quickly drafted and shipped overseas – assigned to 342nd Armored Field Artillery battalion.

His unit was sent to France, making their way through Germany, fighting Nazis and liberating towns along the way.

“They put me humping ammunition taking it from this point to the gun to be loaded and fired,” explained Kelso.

Four months into the action, Kelso and a couple of soldiers went looking for food in an area they thought was liberated.

“I went into this house, 3 or 4 of us.  I was looking for eggs and these Germans were still there and that’s when it happened,” said Kelso.

The Germans opened fire and Kelso and his fellow soldiers fought back.

“They killed one of our guys,” Kelso said.

Kelso almost died as well. He was bayonetted in the leg.

“I was in the hospital for a couple of weeks,” Kelso said.

Before he could be shipped to the Pacific, the Army found out the now Purple Heart recipient was only 14 years old.

We asked him “When you were over there in Germany carrying artillery rounds, did you ever think I should be in English class or Biology class?”

“I tell you I’d rather be there than taking a biology class,” responded Kelso.

Kelso was sent home… where he made front  page news across the country. 77 years later, Kelso still downplays his heroics and all the attention.

“I didn’t pay a lot of attention to it really,” said Kelso.

He got his GED, then went to college, then signed up to serve again.  He spent 20 years in the Air Force, serving two tours in Vietnam. In 2015, he was awarded the Highest Award in France – the Legion of Honor – for his part in liberating the French from the Nazi regime.

“I played very small role but I was there,”  said Kelso.

Now 92 years old, the boyish looks may be a distant memory.  But in the battle tested eyes of America’s youngest ever World War II hero, the fight is still there!

“I would do it all over,” said Kelso.