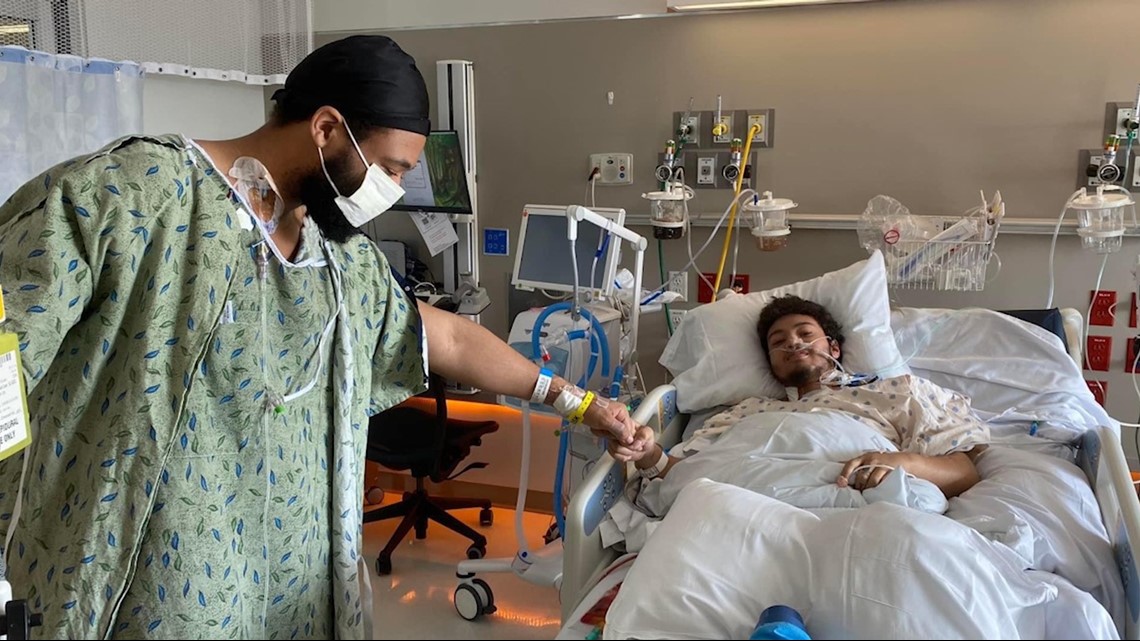 Jalen Crimiel’s healthy lifestyle and quick response to a family crisis saved his cousin’s life. He encourages others to donate as well.

SAN ANTONIO — Earnest Terrence Taylor Jr., who goes by TJ, has lived with Ulcerative colitis since he was 14. The autoimmune disease can cause multiple issues including liver disease and in late September, TJ’s liver started failing.

Additional complications would make the chance of getting a healthy liver extremely slim. Then, out of nowhere, TJ’s cousin revealed he had already been getting tested and could provide a match.

Parents Terrence Taylor and Julie Taylor already had TJ on a transplant list and were working with the Texas Liver Institute to explore every option. They had attempted to donate part of a liver themselves but couldn’t provide a match. The parents said they also worked with University Hospital to put up a Facebook page to look for possible donors and advocate for TJ.

In September, TJ was in a though spot. His liver wasn’t in bad enough shape to move to the top of the list, but his autoimmune disease was also continually damaging the veins near his liver. TJ’s parents said his blood vessels would soon be so badly damaged that a transplant would be impossible. They were running out of time.

“His eyes started to turn yellow. The skin gets a little yellow as well because the liver is not functioning at 100 percent,” Julie Taylor said. “It worsened other organs as well. You can’t reverse the damage”

Little did the family know, Cousin Jalen Crimiel had already seen their Facebook post before they told any relatives about it. Crimiel immediately started to research the organ donor process.

“With family, I have a rule: If I can help family then I help family. I wanted to at least see if I could help,” Crimiel said.

Crimiel started scheduling the necessary blood work, MRI scans, CT scans, and other tests before work or took time off from work to get them done. Before October ended, he was able to prove he was a match. It was just in time.

“We found out he was a match one day and we started to schedule the surgery the next. It was that fast,” Julie Taylor said.

“The doctors kept using the words “gorgeous liver”. It sounded a little ‘Hannibal Lecter’ to me but it was a compliment so I took it,” Crimiel said.

TJ was still recovering in the hospital as of Saturday but was showing improvement. Once he gets out, he will still need to quarantine for several months because of a weakened immune system. Mother Julie Taylor said she was excited to see TJ show signs of recovery.

“I’m just relieved and happy and excited that he is now able to start living like a young kid should live. He’s been though this since he was 14 years old living with chronic pain and extreme fatigue.. to now being about to go to college and live your life,” Julie Taylor said.

Terrence Taylor said he is thankful his son will recover. He said his family has now become so close with Crimiel that its like having another son.

“We told him ‘your like a son to us, we have a room available for you, whenever you want to come here there is a bed. You are welcome any time,” Terrence Taylor said.

Crimiel, who is now waiting for his liver to grow back, will be in quarantine for one month. He told KENS 5 his body is continuedly exhausted as the organ grows back, but he wouldn’t change anything. He hopes that other people will consider becoming a donor as well.

“Even if it is not your family member, if you can help someone out and help them live a quality life I think it is a great thing to do. If you in a situation where you family needs an organ and you are not a match you can even pair-swap donation where they find someone that you are a match for,” Crimiel said. “Everyone deserves a second chance.”

Another cousin created a GoFundMe page to assist the family as they recover.