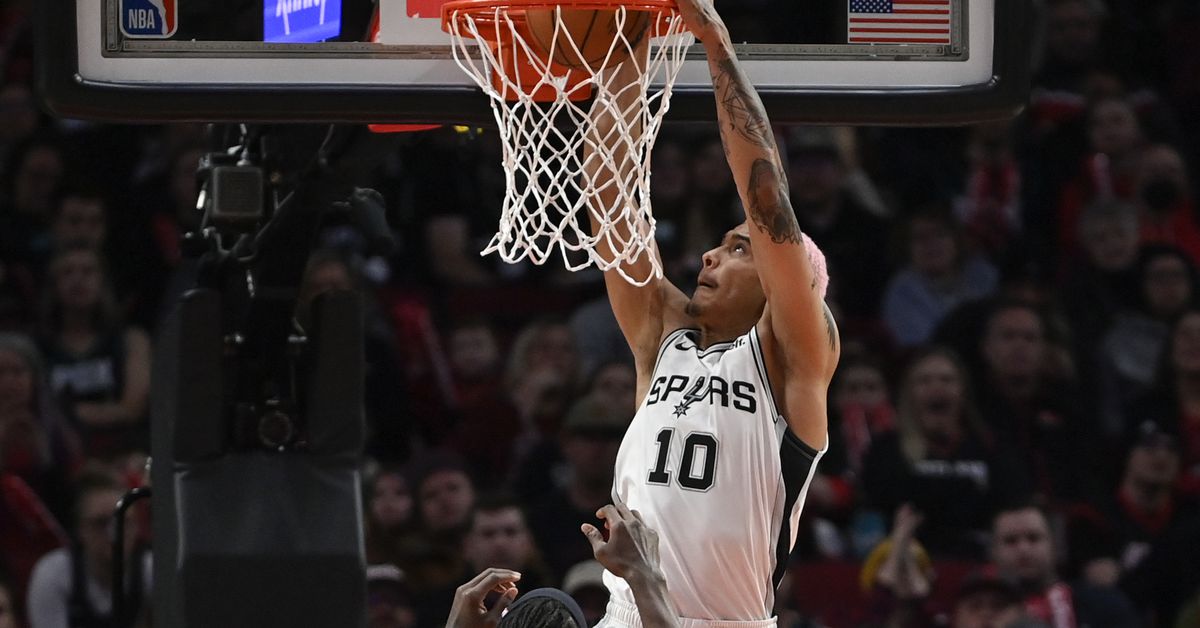 Given how the Golden State game started, it was easy for the Spurs to begin their matchup with the Portland Trail Blazers better. They certainly did so, as they led 16-4 after just 3:46 of game play. Unfortunately, they only scored 13 points over the remaining 8:14 and ended up trailing 30-29 at the end of the quarter. Jakob Poeltl, on the way to a career night, led the way after one with nine points. On the other end, it was the rookie Shaedon Sharpe who helped give the Blazers the lead. He came off the bench and provided a much-needed spark, scoring 10 points on 4-5 shooting.

The Spurs came out in the second quarter similar to how they started the game. They used an 11-2 run to take a 40-32 lead with 8:47 left – capped off by an Isaiah Roby dunk that we’ll come to later. And similar to the first quarter, their lead was for naught. After a Charles Bassey bucket put the Spurs up 48-40 with 5:49 left in the half, the Blazers went on a 22-8 run to take a 62-56 lead into the locker room.

The third quarter felt more like a track meet, as two of the youngest teams in the league let the youth do their thing. The back-and-forth play meant there were more points scored than any of the other quarters, but that also led to a lot of passes that wound up in the stands rather than in hands. This was the only quarter of the game that didn’t have a lead change, but the Spurs found just enough scoring to keep things close, thanks to a little help from Keita Bates-Diop and Doug McDermott. If you want to have some fun, go ahead and read the play-by-play of that quarter.

Again, as they did in the first and second quarters, the Spurs started off the fourth extremely well. A 17-7 run over the first 5:10 of the quarter gave the Spurs a 106-100 lead. San Antonio fans went crazy as they watched Jakob make bucket after bucket, but these were his last points. The final 6:50 of the game was owned by the Blazers. There were some open looks the Spurs just missed. I couldn’t tell you if it was the moment, the inexperience, the defense, or something else, but they could only able to manage two baskets over that stretch. Instead of Dame taking over, it was a complete team effort from Portland. Jakob’s career-high 31 points weren’t enough, as the Spurs lost, 117-100, and fell to 6-9 on the year.

Play of the night

There’s a reason why the dunk is the most exciting play in basketball. In a game filled with quality plays, a dunk that happened at the 8:47 mark of the second quarter is the one that stands out the most. I mean, how could it not? Just look at Isaiah Roby put the Blazers into the basket. We don’t even remember if he finished the and-one or not (he didn’t).