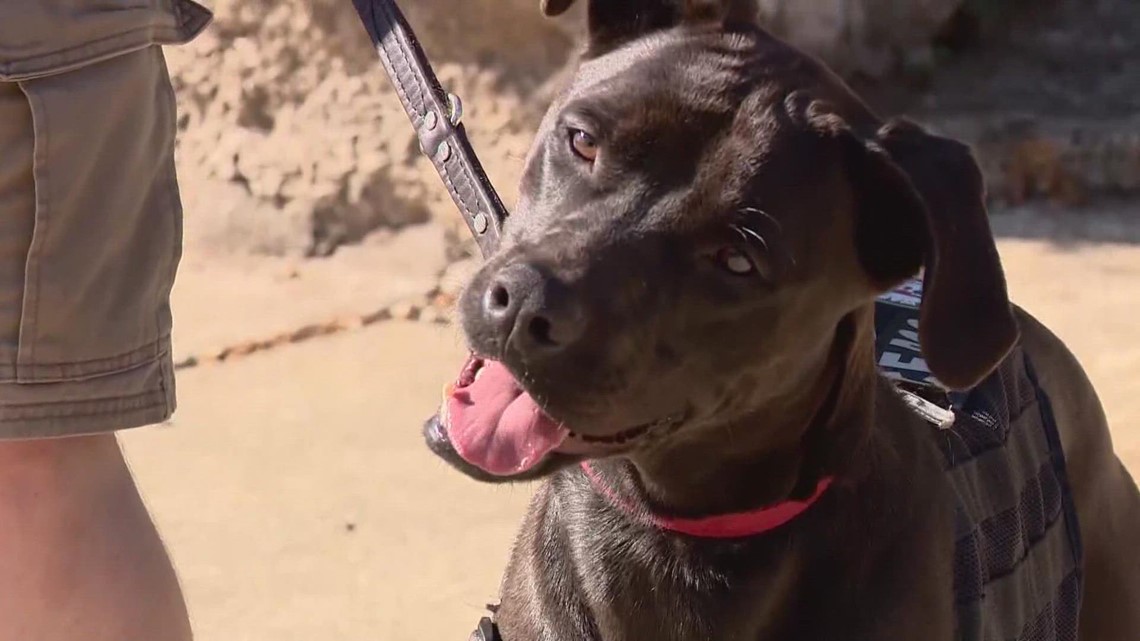 The non-profit organization is the nation’s largest provider of service dogs for veterans suffering from PTSD, brain jury or military sexual trauma.

SAN ANTONIO — K9s for Warriors is dedicated to saving the lives of veterans by rescuing shelter dogs that need a second chance of their own. The non-profit organization is the nation’s largest provider of service dogs for veterans suffering from post-traumatic stress (PTSD), brain jury or military sexual trauma.

Katelyn Van Hofwegen is the procurement manager for K9s for Warriors in San Antonio. She said their work has saved countless lives.

“We save the warrior, but also, we save a dog,” Van Hofwegen said. “And we work primarily with shelter dogs.”

One of their current recruits is Mandu. He was picked up from San Antonio Animal Care Services.

“He actually spent his whole life in a shelter,” Van Hofwegen said. “He started at one facility, went to another rescue, was adopted and then six months later was owner surrendered to Animal Care Services.”

Thankfully, a team member with K9s for Warriors saw something special in the lab mix. They picked him up and assigned him to one of their trainers.

Tyler Jones has been training dogs with K9s for Warriors for about a year now. He works with a handful of dogs at one time. He and Mandu are on their 12th week together.

“At first, he was shy and kind of unsure about other people and new places,” Jones said. “Now, as you’ve seen, he wants to come up and greet every single person.”

Greely is another dog that was hand-picked for this opportunity from San Antonio Pets Alive. She was the right age, size and temperament for the K9s for Warriors program. But before she could help someone else, Greely needed to overcome her own form of trauma.

Her transformation was made possible by the support of her trainer, Natalie Stepniewski. Through patience and compassion, the former veterinarian technician was able to repair those broken bonds.

“I love her a little too much, but that’s kind of the perk of this job,” Stepniewski said. “It’s knowing that she’s going to go on to do what she did for me for someone else who really needs her.”

Randy Butcher needed Ace. After serving 22 years in the military. PTSD consumed his life. His service dog, Ace, turned it around.

In 2022, K9s for Warriors opened its Warrior Ranch in Helotes, becoming the first place outside of the state of Florida to house a Warrior class. The 3.5-acre property is peaceful and secluded to cut out distractions. It has five buildings, including a six-bedroom five-bath home. The veterans don’t pay a dime to stay there.

After Butcher graduated from his program in Florida, he decided to come back as a Warrior Trainer in Texas. Now it’s his job to guide his fellow veterans through what he experienced years ago.

“It’s the least I could do because they’ve saved his life,” Butcher said. “And in doing so, in saving his life, they saved my life.”

Dogs like Greely and Mandu have no idea what they’re learning will help save lives. Soon, both of them will be paired with their battle buddy for life. It’s a bittersweet moment for their dog trainers who have loved them as their own. But, as an Army veteran himself, Jones understands his sacrifice is part of a greater mission.

“He’s going to be phenomenal,” Jones said. “I don’t know any way anyone couldn’t fall in love with him.”

The need for service dogs is great. In Texas alone, K9s for Warriors has a waitlist of 27 veterans who are anxiously waiting to be paired with their service dog. If you’re interested in helping out or learning more about the mission, click here.