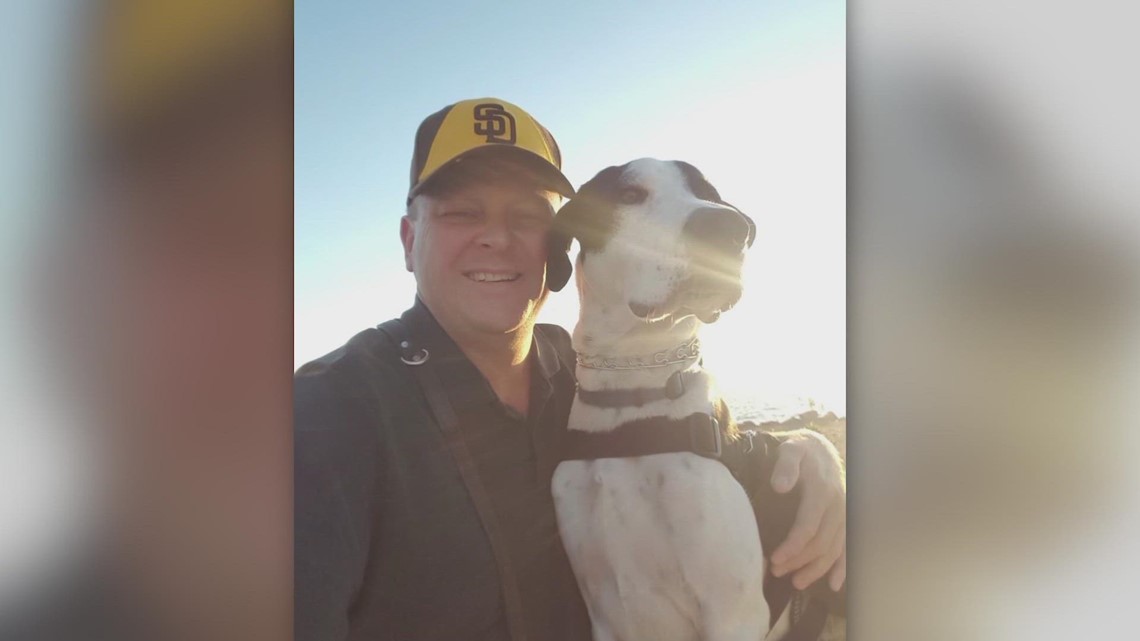 After serving in the military, PTSD consumed Butcher’s life. For 22 years he fought alongside a team, but when he retired in 2011, it became a battle of one.

SAN ANTONIO — If you’ve known the love of a dog, you understand the bond between Randy Butcher and Ace.

There’s childlike laughter in the air as the Army and Marine Corps veteran chases Ace around in the grass. The eight year old pointer-lab mix jumps up and down to play with him. They’re completely relaxed and carefree.

This only happens when Ace’s vest is off.

“When I put the vest on, it’s like a light switch,” Butcher said.

When Ace is on the clock, he’s still Butcher’s best friend, but with a bodyguard mentality.

“We know that the dog is watching our back,” Butcher said. “They could paw on your leg, lean up against you, whatever, just to give you a signal that ‘hey, somebody is coming up, don’t get startled.’”

But Ace’s pawing motion also serves as a hand on Butcher’s shoulder. His gentle eyes and thoughtful nudge remind Butcher that he’s safe.

“He can feel the emotion through the leash, you know? He knows that his job is to sit there and just let me pet on him and love on him,” Butcher said.

After serving in the military, PTSD consumed Butcher’s life. For 22 years he fought alongside a team, but when he retired in 2011, it became a battle of one.

“There were times I’d be working on a truck and it would just start bringing memories back of Iraq and different things,” Butcher said. “I would not get out of the house. I would go to WalMart or Target, but it would be like an hour and a half or so before they close. So hopefully not that many people would be there.”

That went on for a couple of years. Butcher’s personal and professional life suffered. But in 2016, four legs came to his aid.

“From day one, it was love,” Butcher said.

Butcher received Ace through K9s for Warriors, the nation’s largest provider of service dogs for veterans. The organization provides highly trained service dogs to military veterans suffering from PTSD, traumatic brain injury or military sexual trauma. Each dog is gifted to the veteran, free of charge.

“The first night I had him in K9s, he was waking me up in the middle of the night,” Butcher said. “I was having a nightmare and all I remember is waking up and he’s licking my face. So yea, I knew from day one.”

Ace is just as lucky to have him. Butcher said Ace had a rough start. He was dropped off at a soccer field after his first owner decided they didn’t want him anymore.

“I try not to think of how he may have been treated or mistreated because I mean, just to me, it’s like, how can you,” Butcher said. “For one, a dog, but a dog that’s got this kind of personality.”

Thankfully, Butcher said someone at the soccer field saw what happened. They took Ace to an animal shelter. That’s where someone from K9s for Warriors found him.

Katelyn Van Hofwegen is the procurement manager for K9s for Warriors in San Antonio. She said they save two lives at once: a veteran and a dog.

The dogs in their program aren’t raised for this responsibility. They’re hand-picked from animal shelters based off their age, size and temperament.

“We’re looking for dogs that have the potential to be a service dog,” Van Hofwegen said. “Then their training is anywhere between 6 to 8 months.”

With Ace by his side, Butcher’s comfort and confidence are restored. They’ve spent the last six years together. Butcher said he’s been able to enjoy time out of the house with his family again.

“Now, I’m out at the mall during the height of Christmas shopping, where I would never go near the mall before,” Butcher said. “I’ve been to concerts, big music concerts and baseball games.”

Butcher found the program so successful that he made it his day job. He now works for K9s for Warriors as a Warrior Trainer. His job is to guide fellow veterans through what he experienced years ago.

“It’s the least I could do because they’ve saved his life,” Butcher said. “And now in doing so, in saving his life, they saved my life.”

Ace stares at Butcher with loving, attentive eyes. He hangs on every word, waiting for a command or nonverbal cue to take him on the next step of their shared adventure.

“I tell him, ‘thank you,’ all the time,” Butcher said. “He makes everything complete for me.”

To learn more about K9s for Warriors or to donate to its mission, click here.