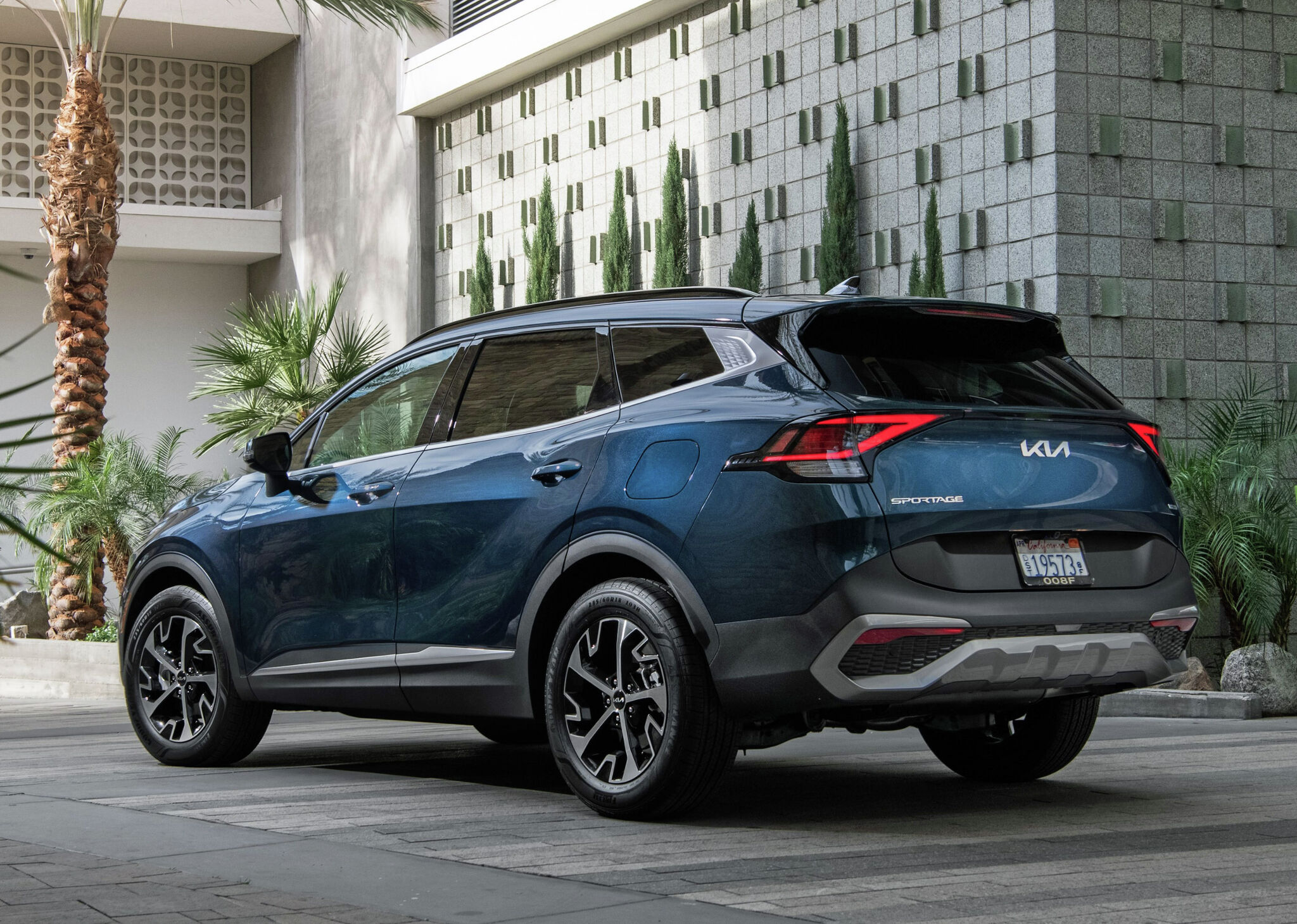 Kia has completely redesigned the compact five-passenger Sportage sport-utility for 2023, and has given the vehicle its first hybrid version.
The Sportage hybrid comes with a 227-horserpower gasoline-electric powertrain that can achieve 43 mpg and drive more than 500 miles on a full tank of fuel.
Its powertrain is anchored by a turbocharged 1.6-liter four-cylinder GDI (gasoline direct injection) engine,  with 177 horsepower and 195 foot-pounds of torque. It’s paired with a 44kW electric motor with 59.3 horsepower, and a starter-generator (electric motor) rated at 17.4 horsepower.
There is a high-output 1.49 kWh lithium-ion battery. Motive power is delivered to the wheels by a six-speed automatic transmission with paddle shifters for simulated manual shifting. A pushbutton system selects Drive, Reverse and Park choices.

For this report, we tested the EX Hybrid (AWD included), with a pleasant Vesta  Blue exterior color and Navy blue interior.
With the redesign, the Sportage moves into its fifth generation. It made its debut in the mid-1990s as the first model Kia introduced as it began selling its vehicles in the United States.
Even then, it was a bit ahead of the times as a compact car-based sport-utility, and it has been a stalwart of the Kia lineup ever since.
Kia says the Sportage Hybrid “is the third model in an ongoing cadence of eco-minded offerings guided by Kia’s global EV strategy, ‘Plan S.’  This newest Kia follows in the footsteps of the recently launched EV6 and the Sorento PHEV to serve as another example of Kia’s multiple pathways to electrification.”

It’s the most-refined Sportage ever, but even the first one, a 1995 model, was an outstanding vehicle for its time. We bought one of the first models, and drove it for more than four years with never a mechanical problem of any kind – and it even came with four-wheel drive.
Kia was an independent South Korean automaker at the time it came to the U.S., but has since become part of Hyundai – although it does maintain its own separate line of vehicles and dealer network.

With the 2023 update, the Sportage is 7.1 inches longer, at 183.5 inches, and has a 3.3-inch longer wheelbase, at 108.5 inches. It’s also a half-inch wider and taller, and has more rear legroom (best in class, Kia says), at 41.3 inches.
There is also more cargo space – 39.5 cubic feet, with a dual-level cargo floor. The rear bench seat has reclining backs with a 60/40 split-folding feature.
During our test of the 2023 Sportage Hybrid, we were immediately impressed by the sporty-looking exterior with its EX-specific 18-inch alloy wheels. Roof rails were included, along with LED headlights, taillights and daytime running lights; rear privacy glass; and rear spoiler.
Once we stepped inside, the interior also impressed us, with apparent premium materials and an upscale look – including the impressive 12.3-inch navigation/audio system screen in the center dash.

Driver-assist and safety technology on our EX model included Forward Collision-Avoidance Assist; Blind-spot Collision-Avoidance Assist; Rear Cross-Traffic Collision-Avoidance Assist; Lane Departure Warning and Lane Keeping Assist; Safe Exit Warning; Driver Attention Warning with Leading Vehicle Departure Alert; Rear Occupant Alert; and Parking Distance Warning with alert.
The rear-seat occupant alert system is designed to remind the driver to check the rear seat before exiting the vehicle, but it goes beyond that. If after the driver exits, the system detects movement in the rear seat, it will flash the lights and sound the horn, and send a text message to the driver.
Sportage’s Active AWD system uses electro-hydraulic coupling with a center-locking differential to distribute power between front and rear wheels depending on road and driving conditions.

The included Drive Mode Select (AWD models only) offers choices of ECO, Sport, Smart and Snow modes.
There is a rearview camera system, and an electronic parking brake with auto-hold.
Other standard safety features include electronic stability control and downhill brake control with hill-star assist. There are front seat-mounted side air bags, along with full-length side-curtain airbags (for both rows of seating).
The electric motor gives the Sportage Hybrid lots of power right from the start, without having to wait for the turbo engine to spool up. We had plenty of power for passing, uphill freeway ramps, and driving on hilly roads.
Sportage’s ride is quiet and comfortable, and the front seats and outboard rear seating positions are comfy even for larger adults. The rear middle seat is best left to children or a child safety seat.
The Sportage Hybrid can tow trailers weighing up to 2,000 pounds when the trailer has its own brakes; otherwise, the trailer weight limit is 1,653 pounds.

EPA fuel-economy ratings for the hybrid are 42 mpg city/44 highway/43 combined with front drive, and 38/38/38 with all-wheel drive.
The only other extra on our 2023 Sportage EX Hybrid were carpeted floor mats ($155). Total sticker price was $33,940, including freight.
The automotive columns of G. Chambers Williams III have appeared regularly in the Express-News since 2000. Contact him at chambers@auto-writer.com, or on Twitter @gchambers3. His driving partner Emma Jayne Williams contributed to this report.