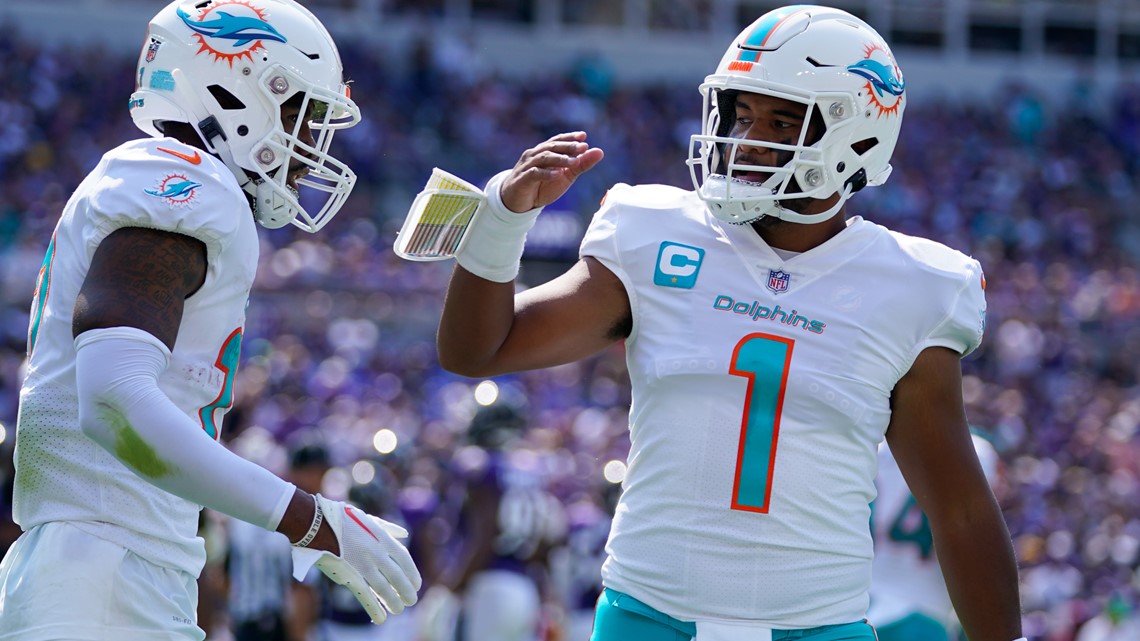 Catch up on what happened around the league in what was an eventful Week 2 NFL Sunday.

MIAMI — Week 2 around the NFL did not disappoint on Sunday as we had some fireworks in Baltimore between the Ravens and Dolphins; big news out of San Francisco as the 49ers lost Trey Lance for the year; and, the New York Giants are just one of four undefeated teams.

The Dolphins, Giants and Bucs came out of Sunday as the only undefeated teams in the NFL through two weeks, along with the Chiefs who got to 2-0 on Thursday night. Although, the 1-0 Bills will have a shot at 2-0 on Monday night as well as one of the Vikings and Eagles, who face off Monday night as well.

Four underdogs won outright on Sunday with the Dolphins beating the Ravens, the Jaguars shutting out the Colts, the Cardinals upsetting the Raiders in overtime and the Cowboys defeating the Bengals at home.

Let’s check out some of the other top storylines from Sunday’s NFL action.

SUBSCRIBE: The Peacock and Williamson NFL Show is your premier DAILY podcast covering the trending topics in the NFL with intuitive conversation from former NFL scout Matt Williamson and NFL analyst Brian Peacock.

Find the daily Locked On podcast for YOUR NFL team here!

The Dolphins and the Ravens played an absolute barnburner on Sunday as Miami came out of Baltimore with the win 42-38.

The Ravens led the game at one point 35-14. But then Miami staged an extraordinary comeback.

“It was like he was playing Madden,” Tyreek Hill said of Mike McDaniels’ second-half play calling.

Via NFL.com, the Dolphins became the first team in NFL history to have a player record at least 400 pass yards and five touchdowns (Tagovailoa) who also had two teammates each with 170-plus receiving yards and two touchdowns.

Tagovailoa tied a Dolphins single-game record with six pass touchdowns Week 2 in Baltimore. Bob Griese did so in Week 11 of 1977 in a win over the Rams, while Dan Marino accomplished his in Week 3 of 1986 in a loss to the Jets.

Tagovailoa improved to 7-1 against Super Bowl-winning head coaches entering the game, according to NFL.com His .875 QB win percentage is the highest mark in NFL history among quarterbacks with five such starts.

It was Hill’s fourth career game with at least 10 receptions, 150 receiving yards and two receiving scores. This ties Hall of Famer Jerry Rice for the most such games since at least 1950, when official game logs have been tracked.

Lamar Jackson had a solid game for Baltimore, passing for 318 yards and three touchdowns and adding 119 rushing yards and a rushing touchdown as well.

San Francisco 49ers quarterback Trey Lance will miss the rest of the season after breaking his right ankle Sunday.

Lance went down after running the ball on the second drive of a 27-7 win over the Seattle Seahawks. A cart came out on the field and Lance’s leg was put into an air cast before he was taken off.

Coach Kyle Shanahan said after the game that Lance would need to undergo season-ending surgery, raising immediate questions about using Lance as a runner between the tackles so often early this season.

“Any time a guy gets hurt, I wish I didn’t call that,” Shanahan said. “But no, that’s something we were going to do and something we would continue to do. It’s a football play we believe in and something that gives him a real chance to be successful.”

Former starter Jimmy Garoppolo, who San Francisco planned to trade this offseason but ended up holding onto as a backup, came into the game and went 13-for-21 with 154 yards and a touchdown.

Instead of the nonguaranteed $24.2 million base salary Garoppolo was owed this season, he will get a $6.5 million fully guaranteed base salary, $500,000 in roster bonuses and the chance to make nearly $9 million more in playing time bonuses.

The New York Giants are one of three undefeated teams

The New York Giants, with the Bucs, Dolphins and Chiefs, are one of fourundefeated teams after Week 1, likely to be joined by the Bills (1-0 facing the Titans Monday night) and one of the Vikings and Eagles (facing off Monday night as well).

The Giants defeated the Panthers at home in a 19-16 game on Sunday.

The Giants defense forced the Panthers to go just 2-for-12 on third down on Sunday and they won the turnover battle 2-0.

It’s a warm welcome thus far for new coach Brian Daboll. The Giants improved to 2-0 for the first time since 2016 and sent the Panthers to their ninth straight loss.

“Whether you score a lot or not, it’s important to figure out ways to win games,” Daboll said. “You can win a game a variety of ways, and also lose it a lot of ways. Again, the object of the game is to have one more point and to give yourself a chance in the fourth quarter.”

The Giants will look to keep it going next week when they face the Cowboys at home, who will be without starting quarterback Dak Prescott. Although, the Cowboys were able to get the win over the Bengals on Sunday with Cooper Rush at quarterback.

Get caught up on all things NFL with the Locked On NFL podcast, your daily podcast for NFL news, analysis, rumors and predictions.

Bengals fall to 0-2 after shocking loss to Cowboys

Bucs handle Saints on the road to move to 2-0

Packers get back on track, Bears come back to Earth