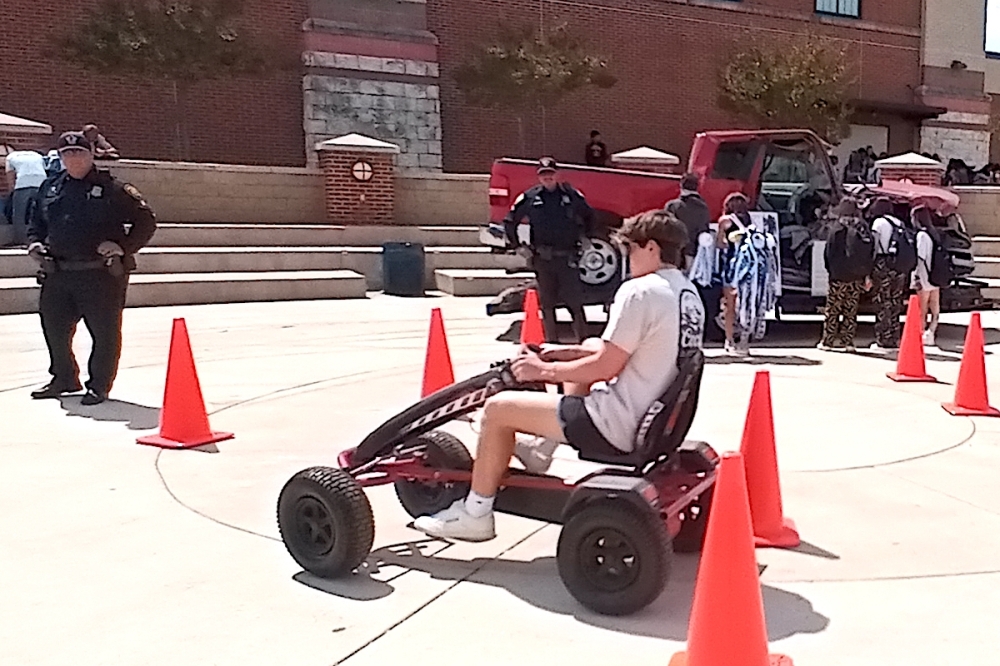 Melinda Cox, the JHS Smart Driving Club’s parent sponsor, said she helped to begin the group in 2012 when her daughter Madeline became a driver, and she noticed many new, young motorists were distracted and using their cell phones.

“Instead of worrying about it, I decided to be proactive, contacted our campus and administration, and we started internally on campus educating students and talking about safe driving, wearing your seat belt, that sort of stuff, and it progressed from that,” Cox said.

Cox said the club’s annual campus event is designed to both demonstrate the effects of bad driving decisions and show how local police, firefighters and civilian groups do their jobs and shore up community safety, especially for teenage drivers.

For example, Bexar County sheriff’s deputies shaded students’ eyes and asked them to pretend undergoing a field sobriety test to demonstrate how driving under the influence poses a public safety risk.

Bexar-Bulverde Volunteer Fire Department personnel at the event let students try on firefighting gear. Community partners and ventures such as AAA and the Safe 2 Save app offered information or posted interactive displays that support the benefits of safe, smart driving.

Cox said students are eager to drive a car and be more independent, but their inexperience on the road could have an adverse effect on them and other motorists.

“What we have here is a bunch of committed community partners—police officers, firefighters, all sorts of different groups. They’re out here because they really care about the community. They see firsthand the impact of poor choices made behind the wheel. They have a vested interest in pushing this message out,” Cox said.

Smart Driving Club President Alex Easley, a JHS senior, said she saw some peers participating with club activities and wanted to get involved.

“I thought it was a good way to be involved in my community and be impactful,” Easley said of the club, which has about 60 student members.

Easley said she is pleased the JHS Smart Driving Club has spread the word about smart, safe driving through many local platforms, including an April 7, 2002, San Antonio City Council meeting when Mayor Ron Nirenberg formally proclaimed that day as a Safe Driving Day.

Easley also said she has learned many lessons that go beyond driving smartly and safely.

“This club made me realized that even though I’m in high school, I have a voice. If you find the right people, you can use your voice to your advantage and to do good,” she said.

Cox said the Smart Driving Club has been working with city to help publicize a city ordinance prohibiting the use of handheld communication devices while driving.

Over the years, the club has promoted its mission via yard signs, digital billboard messages and public service announcements with local businesses.

Additionally, Cox and club members have been communicating with the city and Bexar County to see how best to improve TPC Parkway and Bulverde Road, both of which intersect near JHS.

Many neighborhood members have called for greater area safety following a Jan. 8 car crash that killed JHS students Gabriel Juarez and Ziv Hoodani near the school’s front entrance on Bulverde.

Cox said the incident that took Hoodani’s and Juarez’s lives reminded students of the importance of safety behind the wheel.

“This crash fatality happened on our front door step on a Saturday prior to a school basketball game, not on a big freeway miles away. It just emphasized what our club mission has always been: Make smart choices every single time you are behind the wheel,” she said.

“Even for the kids that don’t drive, I think there are good reminders for them when they reach driving age and tell them about some dangers of driving, that negative things could happen. Let’s give them good information now,” Berg said.

Accuser files first lawsuit against Boerne gymnastics coach jailed for sexual misconduct
Trial for ex-border patrol agent accused of killing four close to wrapping up
Disabled Texas man dies after he was tied by mother and stepfather in RV and neglected, report says