Tafolla has been a voice for the Latino community since her days attending west-side middle schools.

SAN ANTONIO — When it comes to authors in the San Antonio community, few names are as recognizable as that of west side native Carmen Tafolla. Tafolla has been a voice for the Latino community since her days attending west-side middle schools.

Tafolla remembers those early school years as a time that set her on her path of writing and bilingual education. She says the years were so formative because of a lack of Hispanic representation in the material the students were learning, it’s sometimes stereotypical depiction of Hispanics, and the effort to make young Spanish speakers exclusively English with threat of physical punishment if they didn’t.

“We were hungry to see our experience because none of the books had us in them,” Tafolla says. “So my desire was to do something that would bring those stories, those beautiful stories that I heard all around me in the neighborhood. I went to west wide schools at that time. They were not very affirming of our culture or our language. They were suppressing of it. And the images that we got of ourselves from the schools were also very negative. The stereotype of who we were, their awareness of what our culture taught was way off from reality.”

Another motivating factor in Tafolla’s success was the lack of literary resources on the side of town where she grew up. However, she says this only led to students being hungry for that knowledge and hungry to see their stories in literature.

“I mean, there were no libraries on the west side of town. And most of the schools, my school, did not have a library in the school itself, or in the neighborhood. We just didn’t have it. So you might think based on that, that we were very literarily poor. And no, we were. We were wealthy with literature, but it was an oral literature. It was literature that people passed down in the stories that they told,” Tafolla says. “Everything from corridos to bedtime stories that were polished and were passed on for generations.”

Watch the full interview with Carmen Tafollo below: 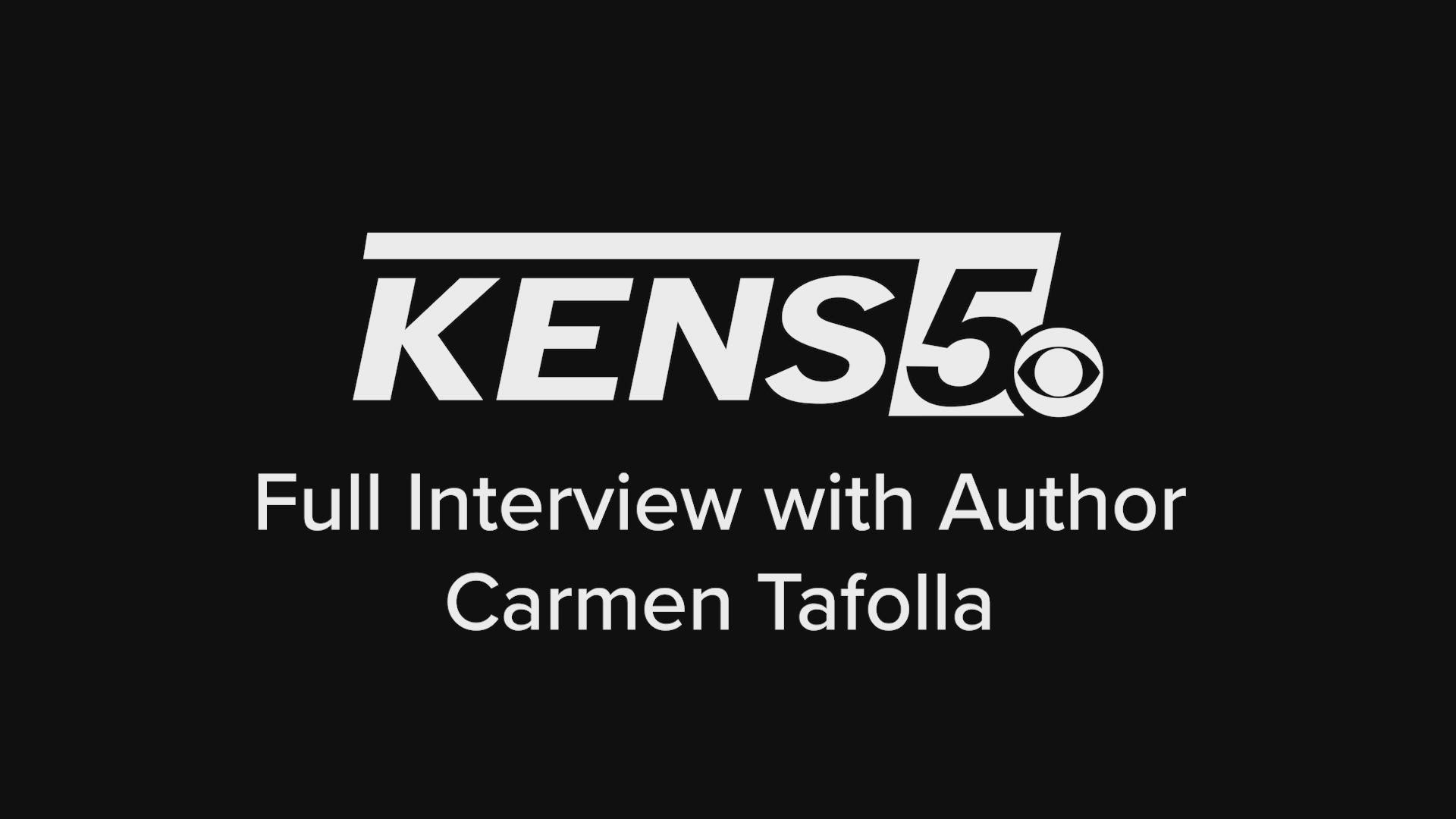 “Furthermore, we were punished for speaking Spanish or even pronouncing our own names,” she added. “Because if you bind somebody’s mouth and don’t let them speak Spanish, then this fluent English is going to pop out, right? No, it didn’t work that way. So it didn’t kill our Spanish. But it made us feel hungry for our language and our culture.”

However, the start of the Chicano movement and Chicano Literary Movement energized Tafolla.

“Fortunately, Mexican-American culture, Hispanic culture, has a great reverence for education,” she says. “So when the Chicano movement came along and which kind of literary movement in the late sixties and the early seventies, I thought that was the best thing in the whole wide world.”

This led her to the career that has now spanned decades and has seen her garner countless awards and recognitions. This includes being named the first ever Poet Laureate in the history of the city of San Antonio by then-mayor Julian Castro in 2014. An honor that she says is one of the greatest of her career.

“Writing was kind of in my blood and in my barrio. I just felt an attraction to being a writer,” Tafolla says. “I didn’t even know you could be a writer, that that was an option as a as a profession. And I just thought this was so exciting to be able to take these stories and put them in a way that could reach more people.” 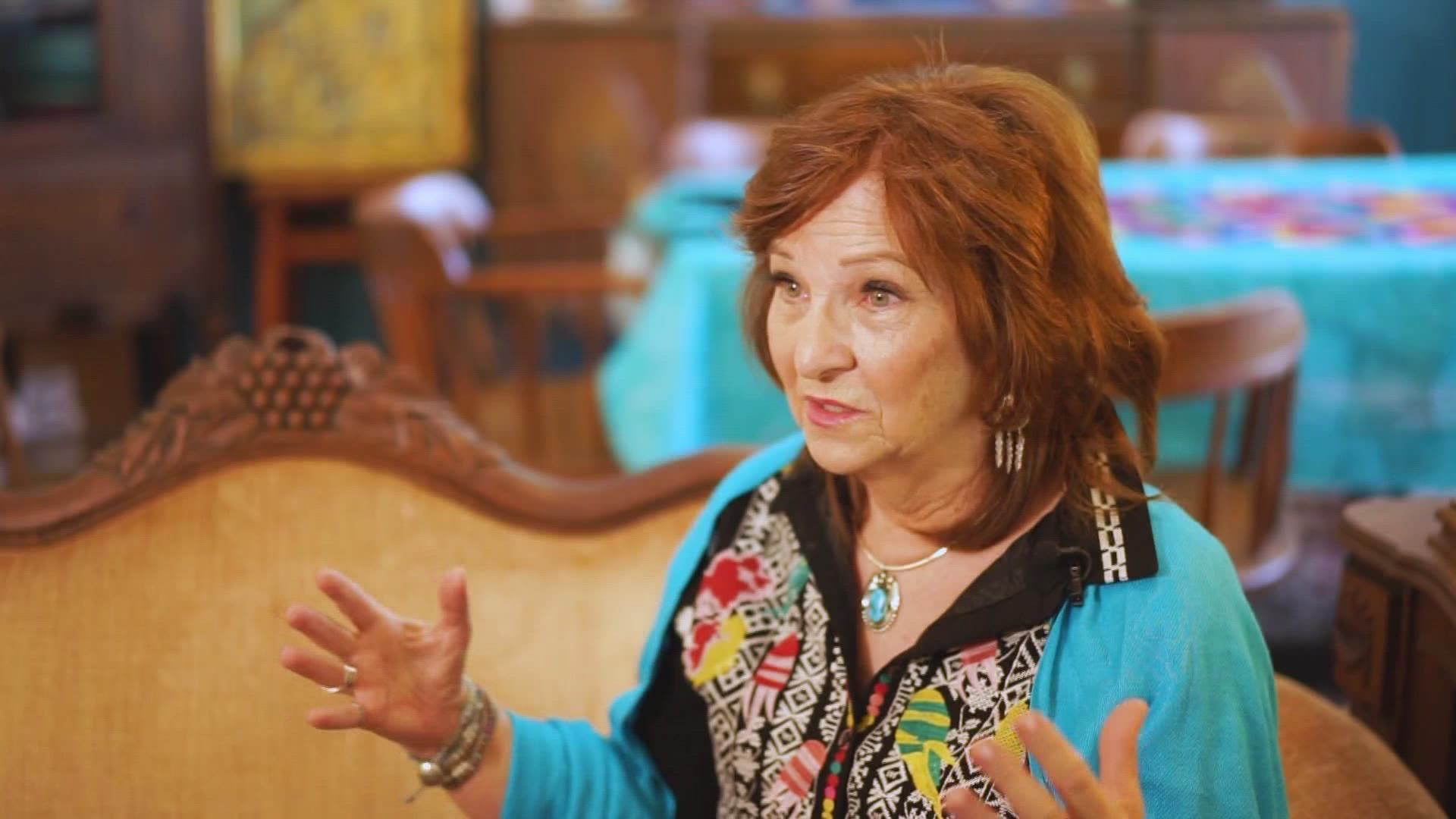 Now her work has reached people across the globe.

“Little did I know that years later that would mean that things that I wrote would reach people on the other side of the planet that I had never met, but that they would appreciate and be touched by something and identify with something that I wrote about here, because as human beings, we’re very close, we’re all connected, we’re really all familia. And literature that travels world allows us to see that.”

Tafolla also had a successful career in bilingual education and retired several years ago as a Professor Emeritus at UTSA.

“I had all of these stories in me. So the minute I heard about bilingual education, I decided that’s what I wanted to be,” she says. “I got a bachelor’s degree, I got a master’s degree. Texas Lutheran College wanted me to direct their Mexican-American Studies Center. I had never heard of a Mexican-American studies center, but I thought it was wonderful. And so I ended up teaching college when I was 22. I signed the contract when I was 21. I went on and got my doctorate and guess what? I specialized in bilingual education.”

This was no accident. She credits her journey down the path of bilingual education to her experiences as a child. “

That was what was weighing on me is one of the greatest injustices that I saw to take a people’s voice away,” she says. “And of course, what comes next is bilingual literature. Where’s the literature that reflects Mexican-American culture? And so that began to pull me.”

Tafolla has now released countless literary works, however, she continues to reinvent herself, while says she is not a formula writer.

“I went into poetry first and short stories and then children’s lit. And I’ve been able to put a lot of books out there. I’ve done poetry of place, poetry for children. I’ve done poetry for adults. I’ve done short stories. And then I get bored and I want to do something different,” Tafolla says. “I feel that I never stop crossing borders when it comes to writing. I write in every form that I can create or invent or fuse between two other forms.”

Having lived in San Antonio for much of her life, she says the city and its people continue to inspire her. “It’s a very universal city. It’s very attractive to people from across the world, coming here, wanting to join in this gentleness that this river has always represented for us. We celebrate in this city. We know how to canta y no llores. We turn everything into a festive excuse to celebrate and affirm human beings. That’s what San Antonio is, and that’s what I hope to produce in my writing.”

Tafolla’s latest book is a collaboration with photographer Frederick Preston called Arte del Pueblo: The Outdoor Public Art of San Antonio. She describes it as “a poetic narrative, trying to capture the heart and soul of the art of the city of San Antonio.” She says she wants to “guide the reader in just a few light poetic words through what art means to us and how it tells our history.”

Tafolla closed the interview by giving advice to young people, especially those of color.