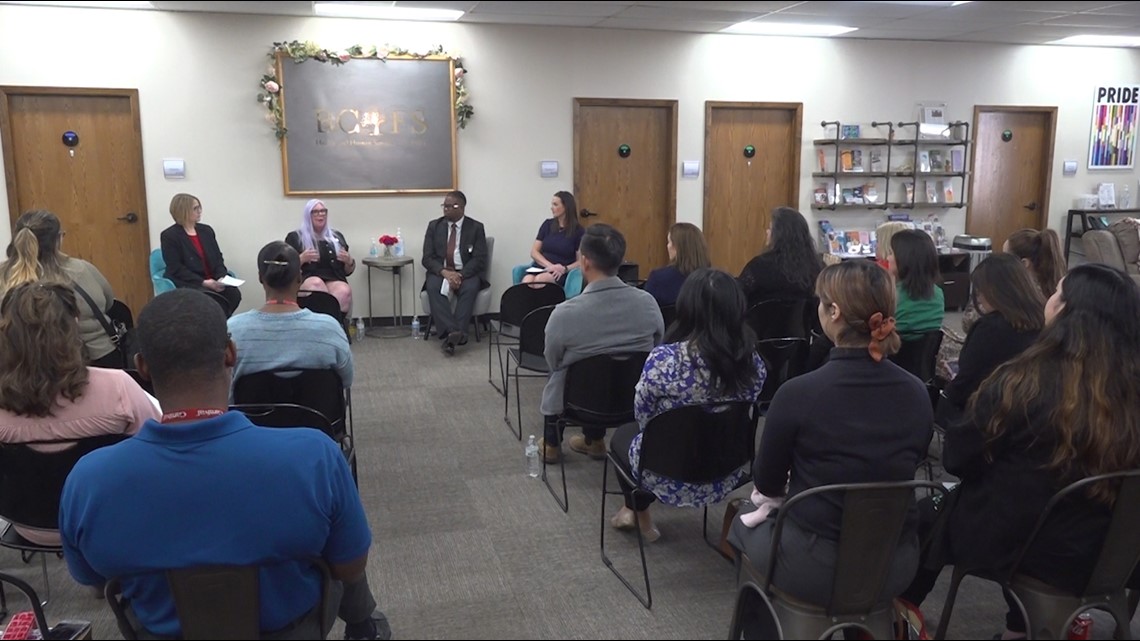 Panelist said up to 1 in 4 kids in a foster home situation could end up homeless or in human trafficking.

Thursday, the San Antonio office held a panel discussion on how fostered youth are more vulnerable to homelessness and human traffic.

“One in four kids end up as homeless or in a human trafficking situation in the foster care system. So it is on us as parents, as child welfare works, as human beings wrap around our kids and make sure that we are doing everything we can to prevent this from happening,”  said Carlye Dupart, the Chief Administrative Officer of SJRC Texas.

Mosely Hobson grew up in foster care in Virginia and went into the military when he was 17. Hobson said his outcome was better than some of the other children in the system, but he still remembers the sense of abandonment he felt as a child.

“I was moved from my first home to my second home when I was five. That’s when the trauma began. Now I’m having to navigate all these emotions. I’m trying to figure out why, when I come home from school, I have to sit on the steps. I’m trying to remember why my family didn’t fight for me,”  Hobson said.

Hobson said children in that same situation are going to want to get out of the situation faster than others but are even less prepared than others to function as an adult. That can result in homelessness.

“We find out later on that these children are homeless four years after emancipating from care. What does that look like now?” Hobson said.

He said those same children are going to be easy prey for traffickers.

“We have to give our kids a voice. If our kids don’t want to be in a placement how long are they going to stay? In this population, they are runners. That’s what we are going to do. We need to make sure that they are connected to the placement,” Dupart said.

Hobson said the solution is to build a strong community around the foster care system and try to have as many people as possible making a positive impact.

“I had support from my guidance counselors, my teacher, my pastor, other community members. Even my family that I grew up with as a foster youth were still present as I transitioned into adulthood,” Hobson said. “(People need to) Step up, become mentors, become advocates, become resources for our youth that are transitioning into adulthood.”

Both Hobson and Dupart asked people to be vigilant and report something unusual that could be linked to trafficking if they see it.

Get involved with BCFS Heath and Human Services here

Get involved with connectED, which works with young adults coming out of the foster system here.