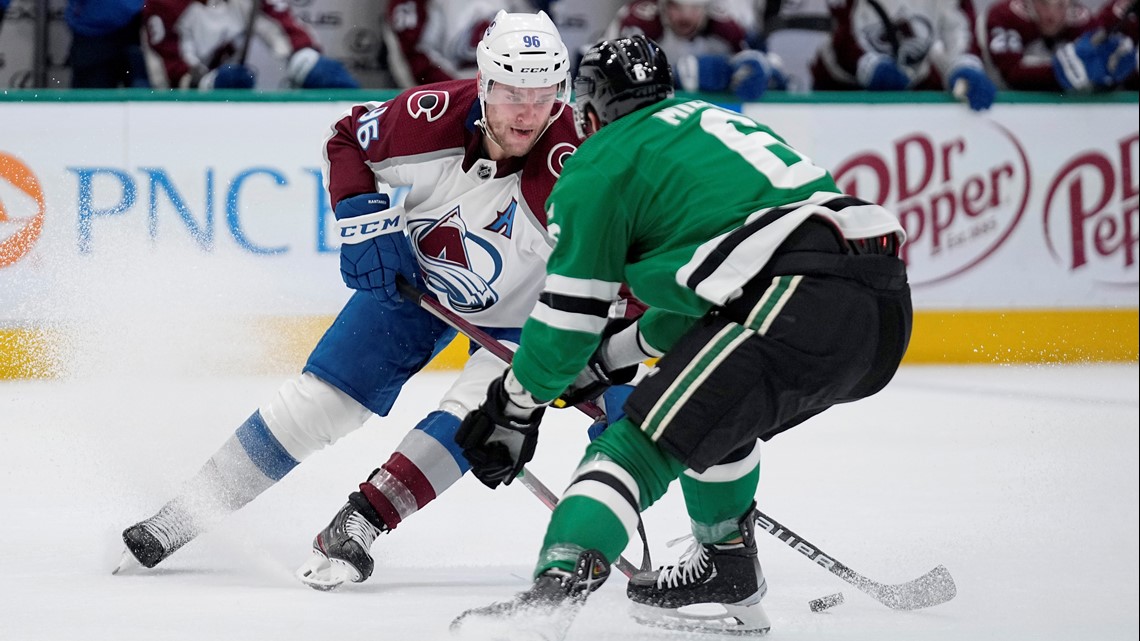 Jason Robertson scored twice for the Stars. His goal with 25.8 seconds left in the third period sent the game into overtime.

DALLAS — Mikko Rantanen was the only scorer in the shootout as the Colorado Avalanche beat the Dallas Stars 3-2 on Monday night.

Alex Newhook and Cale Makar scored in regulation for the Avalanche, who have won seven of their last eight games and moved within a point of first-place Dallas in the Central Division. Alexandar Georgiev made 22 saves for the Avs.

Jason Robertson scored twice for the Stars. His goal with 25.8 seconds left in the third period sent the game into overtime. Jake Oettinger stopped 34 shots.

Rantanen beat Oettinger to the glove side on the second of Colorado’s three shootout attempts.

Robertson was Dallas’ third shooter after Tyler Seguin couldn’t get his shot away and Joe Pavelski sent a backhander over the crossbar. Robertson’s attempt sailed wide.

Robertson sent the game into overtime with a 6-on-5 goal from a tough angle at the top of the right circle.

Newhook was alone in front of the crease to cash in on a rebound after Oettinger made a point-blank save on Evan Rodrigues to give the Avalanche a 2-1 at 2:06 of the third period.

Robertson’s first goal, at 5:33 of the second period, tied the score at 1 and was awarded after a lengthy review. Robertson poked at the puck as he was being cross-checked by Andreas Englund head-first into Georgiev, with the resulting collision knocking off the net after the puck crossed the goal line.

Robertson has 14 goals, tied for second in the NHL. Twelve have come during his current 12-game point streak, which is one game short of the all-time Dallas mark set by Dave Gagner in 1993-94.

Makar opened the scoring with a power-play goal at 10:10, a one-timer into the top corner off a pass from Rantanen behind the net. That gave the league’s best power play going into the game (36.5%) a man-advantage goal in six consecutive games.

The goal gave Makar, in his fourth season, 200 career points. He’s the fastest NHL defenseman to reach that milestone, doing it in 195 games. That’s 12 games faster than Sergei Zubov, whose uniform number was retired by Dallas.