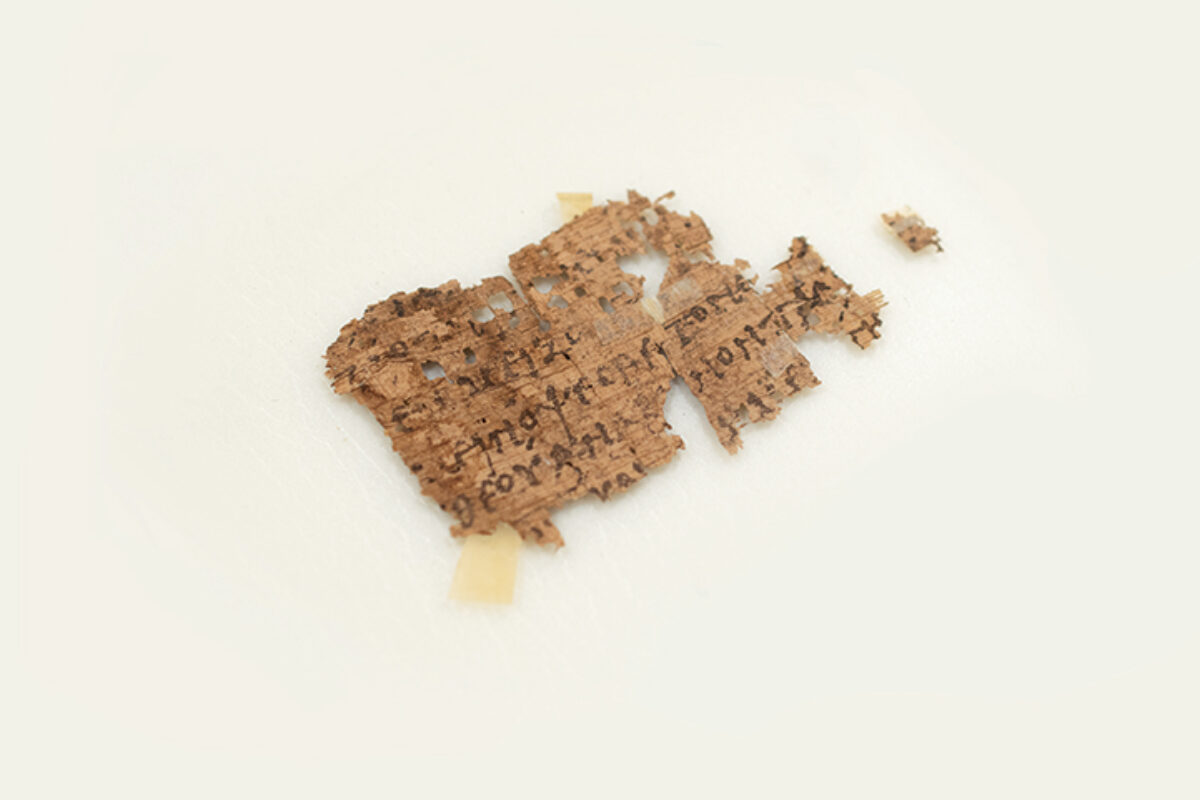 The University of Texas has a priceless piece of early Christian history on display thanks to an online auction and a lot of luck. On Tuesday, November 15, the Harry Ransom Center announced that it had added to its collection a credit-card-size fragment of a manuscript scroll of the Gospel of John, written in Greek and dated circa A.D. 250-350. The Willoughby Papyrus, as it is known, is on display this fall.

Professor Geoffrey S. Smith, also director of UT’s Institute for the Study of Antiquity and Christian Origins, found the fragment while perusing eBay in 2015. According to a contemporary story in the New York Times, the item was listed with an opening bid of $99. The seller halted the auction at Smith’s request, after which the professor presented his findings at a conference in Atlanta.

A “generous UT alum,” according to a spokesperson at the Harry Ransom Center, provided funding for the purchase through the Department of Religious Studies, meaning that no public funds were used in the acquisition.

“The fact that this one came to light on the Internet speaks to the reality for all of us who deal with manuscripts and antiquities,” Smith told the Times in 2015. “We’re all trying to come to terms with these things we study, our prized scholarly possessions, are now coming up for sale online.”

Smith, who serendipitously scrolled far enough to find the ancient jewel, says that the Willoughby Papryus is an extreme rarity. It is thought to be the only existing fragment of early New Testament writing on a blank papyrus scroll instead of a codex, or ancient manuscript book, which would have been the preferred format at the time.

The Willoughby Papyrus now resides at the Harry Ransom Center as part of a collaboration with the Institute for the Study of Antiquity and Christian Origins. The Ransom Center aims to conduct a technical analysis of the papyrus and the ink used as part of a multidisciplinary study meant to provide insight into the history of Christianity and other religions and to perhaps understand the unidentified Christian text that appears on the reverse side of the papyrus.

“By offering a unique window into the early transmission of Christian scripture, the Willoughby Papyrus strengthens the Ransom Center’s already wide-ranging and often deep holdings in the history of information technology, in the material ways humans have recorded their ideas and activities,” said Aaron T. Pratt, curator of early books and manuscripts.

The Willoughby Papyrus is on view on UT campus at the Harry Ransom Center, a free museum that also has a Gutenberg Bible on display.