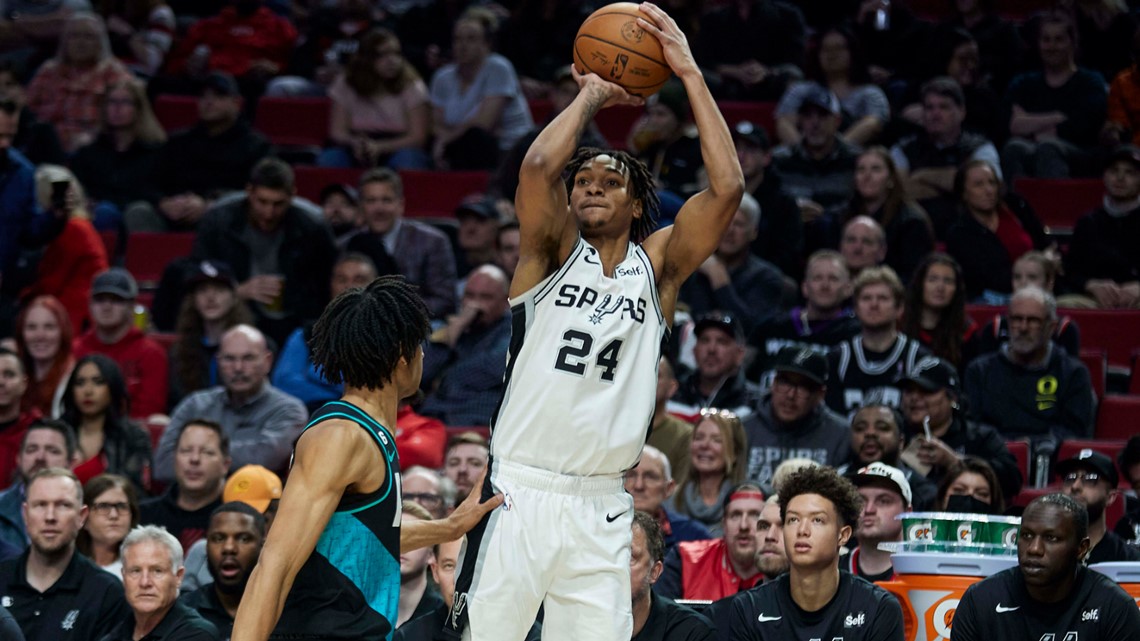 Big Jak put up 31 points and 12 boards and San Antonio played with tremendous effort, but couldn’t keep up with a hot-shooting Portland team on the road.

SAN ANTONIO — The San Antonio Spurs (6-9) put up a fantastic effort in the second game of a back to back, but the Trail Blazers escaped with a 117-110 win on their home floor.

Jakob Poeltl led the way with a career-high 31 points, and Keldon Johnson and Devin Vassell each crossed the 20-point threshold. Tre Jones made an impact on both ends with 3 steals and 9 assists after missing the previous game, and Jeremy Sochan played excellent defense on Damian Lillard in crunch time. Still, San Antonio couldn’t quite keep up with a hot-shooting Portland team.

San Antonio started the game strong as Devin Vassell drilled a pair of threes before Keldon Johnson added to the long-range barrage. The ball moved around better with Tre Jones back in the lineup, and Jakob Poeltl finished a few attempt inside.

Jeremy Sochan scored off a feed from Poeltl to give the Spurs an early double-digit lead, but the West-leading Blazers fought their way back in front. To close the first quarter, Tre stole an inbound and Sochan found Josh Richardson for a jumper.

Vassell opened the second with another three, then a few saucy driving layups. Isaiah Roby stunned the Portland crowd with a lefty poster dunk off a feed from Jones.

Johnson drove and found Poeltl underneath for an easy finish, then Keita Bates-Diop got it back to Sochan for a baseline dunk. The Blazers took the lead, then Vassell nailed another deep one off a feed from Keldon. Johnson hit his own three, but the Spurs trailed 62-56 at the break..

KBD scored three in a row for the Spurs, then Johnson added a 5-point flurry of his own. Doug McDermott finished on a cut, Charles Bassey dunked off a feed from Devin, then Vassell picked off a pass and took it coast to coast for a dunk to trim Portland’s lead to a pair.

Vassell hit three free throws, then Poeltl scored four consecutive buckets for the Spurs to give him a career-high and put San Antonio in front. Poeltl dimed Keldon, who scored four in a row. When he missed another try, Poeltl popped it back in like a volleyball player.

Former Spur Drew Eubanks caught it under the basket and went up for a huge bucket through a foul by Poeltl, giving Portland the lead with the free throw. Damian Lillard checked his watch, realized it was Dame time, and swished a deep, deep triple.

Still, the Blazers extended their lead as San Antonio misfired on the offensive end. The Spurs fell 117-110.

The Spurs are coming off a 132-95 road loss versus the Warriors.

RELATED: Warriors 132, Spurs 95: What they said after the game

1. The Spurs have won four-straight games versus the Blazers.

3. In their nine wins this season, the Blazers are averaging 113.7 points per game.

4. The Blazers are fourth in the NBA in three-point percentage at 38.7-percent.