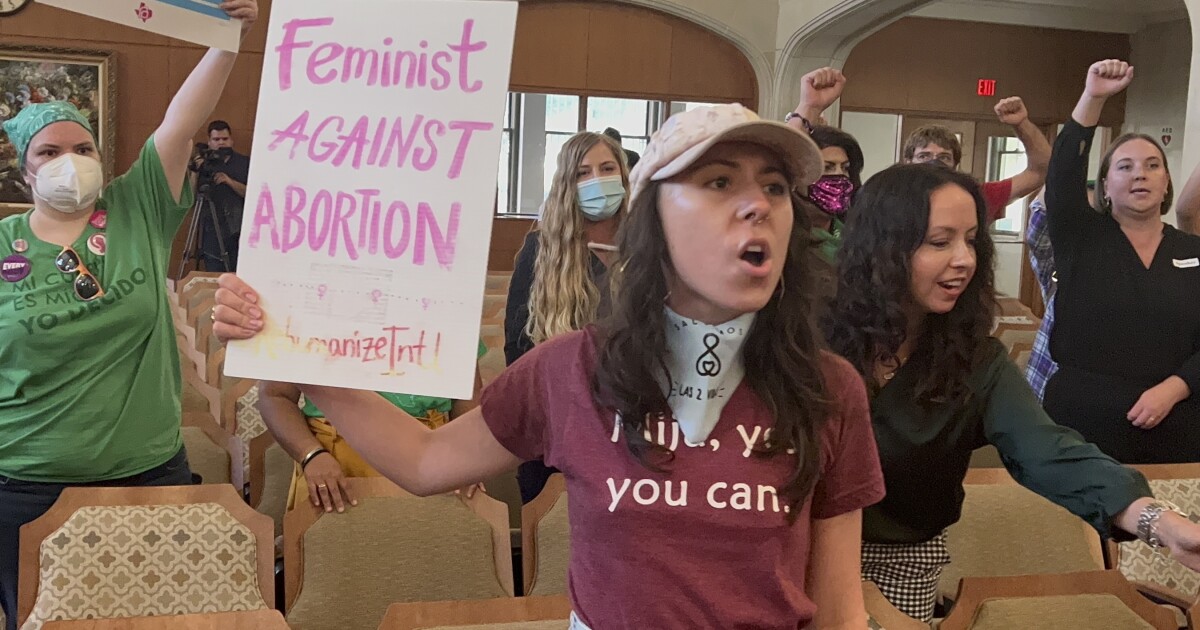 A resolution declaring that people have rights to their own reproductive health passed the city council in a 9-2 vote during a special meeting Tuesday.

Under the resolution, the council made the right to abortion access an official stance of the City of San Antonio. While it changed nothing in state law and does not make abortion legal in San Antonio, it does recommend – but stops short of mandating – that city funds not be used in investigating, reporting, or storing data about abortions.

Part of the resolution read: “The City of San Antonio formally condemns any action intended to abrogate the fundamental liberties of its people and affirms its commitment to protecting the right of its residents to make reproductive health decisions, including abortion care, for themselves.”

The meeting was expected to be contentious, with more than 100 people signed up to address the council, an unusually high number compared to most city council considerations.

San Antonio Mayor Ron Nirenberg, who called the special meeting of the council to vote on the resolution, said it was the first step in providing access to reproductive rights.

“Access to basic medical treatment including abortion is a human right, criminalizing those who seek abortion care will create a hostile and dangerous future for far too many,” he said.

Councilwoman Teri Castillo introduced the resolution. She said abortion is a form of health care.

“Everyone deserves access to a safe abortion and other reproductive health care. San Antonio has a history – an identity – for fighting back against injustice,” she said.

The most immediate impact the resolution would have is city staff advocating to state and congressional lawmakers about making abortion access possible. It would include abortion access as a priority in the city’s legislative agenda.

District 1 resident Rachel Rabbani was among those who signed up to speak, either for or against the resolution. Rabbani, who supports it, told the council about her own experience in receiving an abortion.

Crowd in the council chambers is pretty heavy right now. More than 90 people have signed up to speak.

(The music is the city council opening pre-roll that starts at every meeting.) pic.twitter.com/d8AtSmMdnI

The resolution received backlash from members of the religious community who wanted the city council to take a pro-life approach. Catherine Nix, director of San Antonio Coalition for Life, said the resolution was in contradiction to the rights of the “preborn.”

“Whether or not the council agrees with the current laws, it’s responsibility is to uphold them,” she said. “Clearly this resolution is drafted to support abortion but does the city understand what it is defending? A woman does not abort her own body – she aborts someone else’s body. What of the bodily anatomy of the preborn child?”

Recurring heckling from both pro-life and pro-choice supporters forced Nirenberg to recess the meeting for about five minutes to regain order.

A majority of the council approved the resolution. The two “no” votes came from District 8 Councilman Manny Pelaez and District 10 Councilman Clayton Perry, who represented the northwest and northeast side of the city respectively.

“This divides our community. It certainly does not unify as evidenced by today,” he said, referencing the comments made by the public.

Pelaez declined to support the resolution. He said he supports the right to an abortion but added the resolution would not change any laws in San Antonio.

“San Antonio will remain just as dangerous today for people, for women who want get abortions – a non-binding resolution is insufficient to address the problem,” he said.

Pelaez said an ordinance that would prohibit city spending on abortion investigations would gain his support but such an ordinance is not possible without the threat of lawsuits from the state.

Castillo, speaking to Pelaez, said the resolution would mean the city council is in support of the San Antonio residents who want this.

“To you as a man, who can’t carry a child, believes that this is toothless. For the constituents throughout San Antonio who reached out to my office through social media, through our constituent services calls, this means something, and this holds weight,” she said.

Castillo ended her comments by noting that Pelaez, as chair of the intergovernmental relations committee, which organizes the city’s legislative priorities, should be the first voice in supporting the resolution.

“So we’re going to take them up on the opportunity – as someone who controls the agenda of that committee – to ensure that he prioritizes abortion and reproductive access as well as access to contraceptives,” she said.