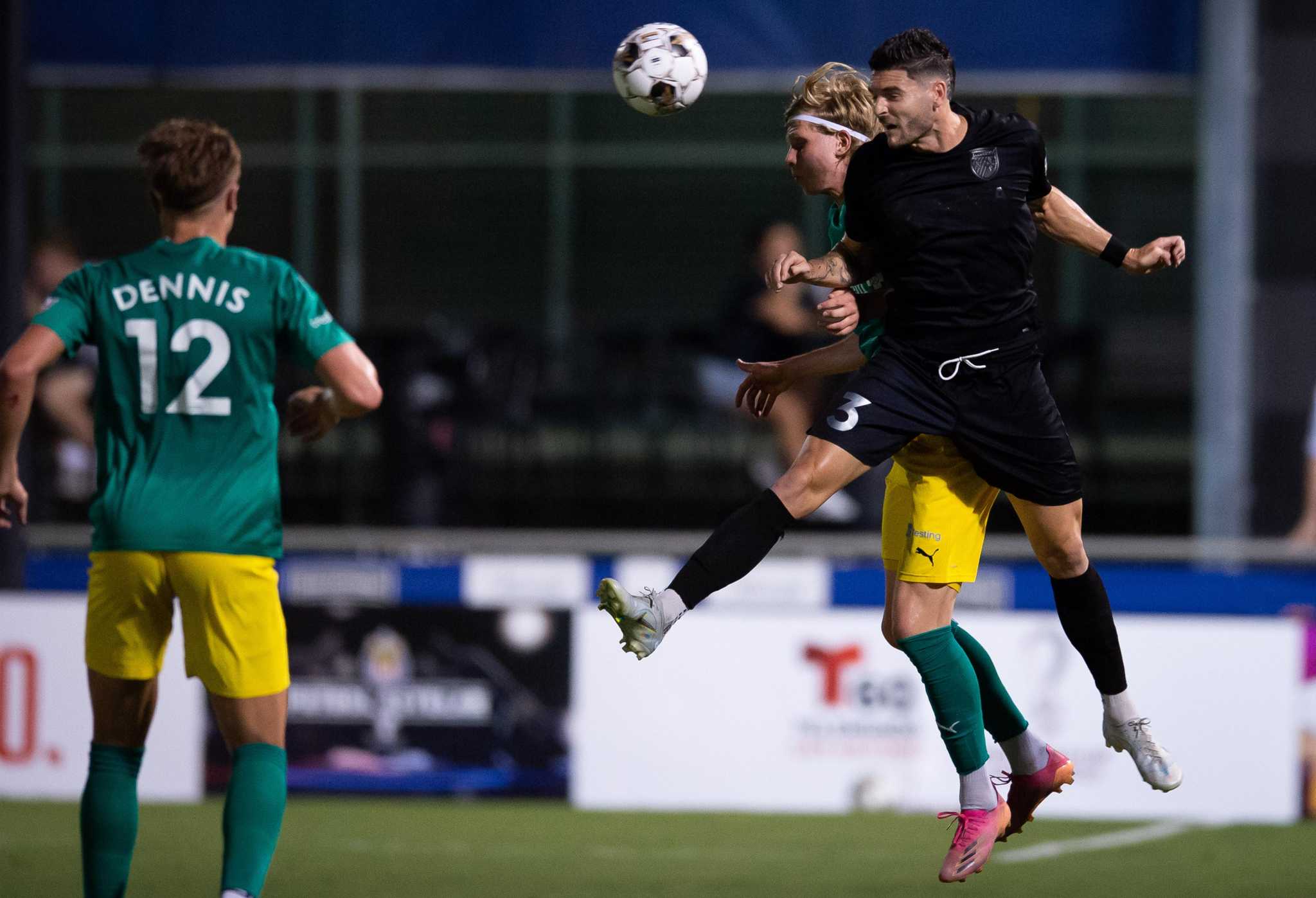 As Oakland Roots SC’s Lindo Mfeka was reaching toward his right ankle and writhing in pain, he grabbed his shoe by the heel and flicked it off his foot.

With San Antonio FC’s attacks toward a winning goal slowed and disjointed by an array of Roots cramps and apparent injuries, SAFC keeper Jordan Farr had evidently seen enough. He made his way out of the net and toward midfield, grabbing Mfeka’s shoe to return it to him before engaging in a shouting match with Oakland players that eventually earned him a yellow card two minutes into stoppage time.

Mfeka was carried off by team trainers and would not return, leaving Oakland with nine field players due to a legitimate injury after a string of potential Roots embellishments.

Though San Antonio FC continued to push forward through nearly 12 minutes of cramp-induced stoppage time, the club never found a breakthrough goal, notching a draw for the first time this season with a 1-1 result against Oakland on Saturday at Toyota Field.

“I felt we dominated from start to finish,” SAFC coach Alen Marcina said. “Our pressing actions were fantastic. Created a number of clear-cut opportunities. … Definitely a very, very positive performance, and we just have to work on that final action, final execution.”

SAFC (10-3-1, 31 points) finished with a 17-5 lead in shots and a 7-3 margin in shots on target. San Antonio threatened with five shots and a corner kick among an array of other chances from the 80th minute on as the Roots (4-5-9, 21 points) wilted through a match that kicked off with 94-degree temperatures.

In the 83rd minute, Santiago Patino attempted to recreate the game-winning goal he notched in his return from injury last week, muscling a defender to the ground to earn a free run at the net from about 30 yards. After one heavy dribble, Patino drove a shot from the edge of the penalty area toward the lower-right corner of the goal, but Oakland keeper Paul Blanchette dove to keep the ball out with his left hand.

“The last 20 minutes were so emotional. We want to score. We want to win the game,” midfielder Victor “PC” Giro said. “Santi missed a goal that normally he doesn’t. The emotion was there. … Those moments, it’s just, keep going. Especially when you play at home, you never want to stop. Keep our plan. Pressure high. Create opportunities to score goals. But it wasn’t there tonight.”

In the 89th minute, SAFC’s Mohammed Abu lofted a free kick from the midfield that found a sprinting Mitchell Taintor on the back post for a sharp header from the edge of the 6-yard box that Blanchette parried away.

San Antonio continued to threaten into the 10th minute of stoppage time, when Deshane Beckford dribbled in from the right edge of the penalty area and rolled a crossing pass toward center. The ball became caught up in the feet of Ignacio Bailone at the edge of the 6-yard box, and his attempt to create a back-heel shot was eventually scooped up by Blanchette.

“The guys really worked hard for every single opportunity that we got, and it sucks whenever you can’t put them away,” forward Samuel Adeniran said. “With this team, I always feel like the goals were coming. … From the start of the second half, I had no fear, no worries. But sadly, we just couldn’t put it away. Hopefully we can next time.”

Adeniran provided SAFC’s lone goal of the night during first-half stoppage time. After a cross from David Loera was headed the opposite way toward center by PC, Adeniran controlled the ball with his feet, turned and rolled a shot inside the right post.

Adeniran, who ranked 11th in the USL with 13 goals last season as a member of the Tacoma Defiance, scored in just his second match with SAFC after being added on a loan from Seattle Sounders FC on June 9.

“This team is so talented,” Adeniran said. “Obviously, I believe I’m a talented player, so I think just dropping another talented player into a team that’s already filled with so many talented players, it’s only going to move you forward and help you win championships.”

Oakland scored the opening goal of the match in the 29th minute, as Juan Azocar dribbled in down the byline after a short corner kick and sent a crossing pass to Joseph Nane for a free header from about 10 yards.

The strike was only the third goal San Antonio has conceded at Toyota Field in five matches this year. Saturday’s match was the club’s first at home since April 30.

Though the draw dropped San Antonio from the top of the USL Championship standings, the club will have the chance to reclaim the No. 1 position when it travels to face Colorado Springs Switchbacks FC (11-2-0, 33 points) at 8 p.m. Friday.

“Every game is special. For us, every game is a final,” PC said. “But against them, it’s going to be different, because we’re fighting for first place in the conference. It’s going to be an important game, so we’re going to give our best.”

District 5 Councilmember Encourages Artists and Art Organizations to Apply for American Rescue Plan ...
KSAT asked state lawmakers if they want Abbott to call a special session and what needs to change in...
Bazan Branch Library to Reopen June 4 - City of San Antonio