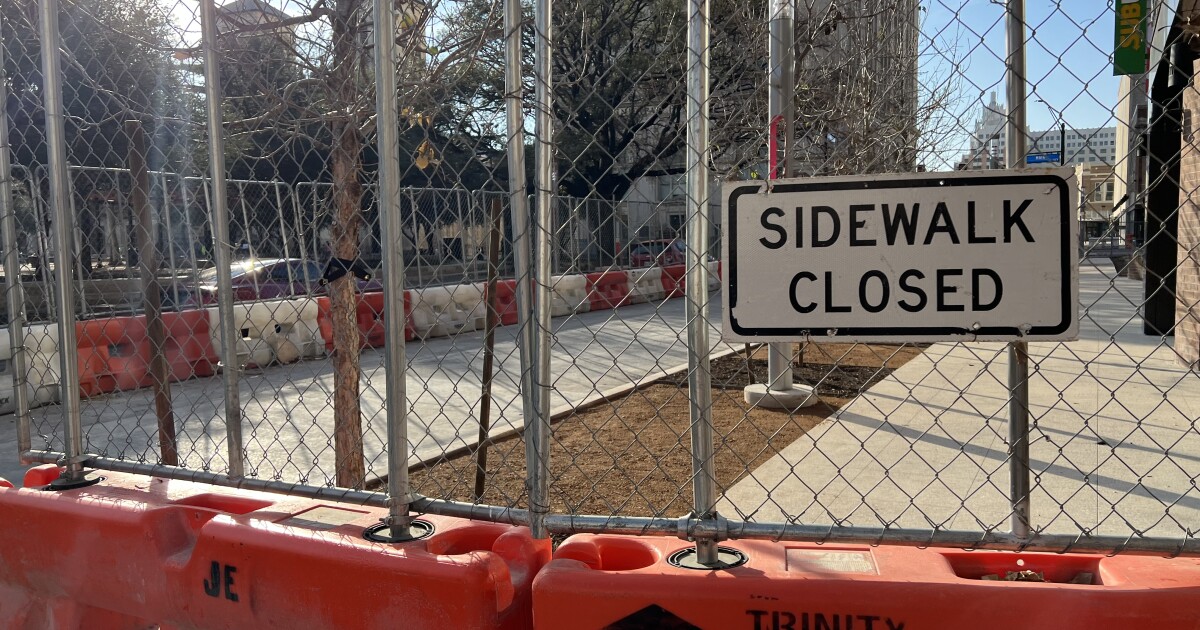 Businesses in prolonged construction areas like North Saint Mary’s and Broadway will be eligible for grants up to $35,000 under a new relief program from the City of San Antonio.

The city is limiting applications for the funds to small businesses in 15 areas where construction projects started between January 2020 and June 2022. Businesses that lost at least $10,000 in revenue in 2022 compared to 2021 are eligible to apply. The city is using federal money from the American Rescue Plan Act to fund $2.25 million worth of grants.

In late 2022, the city had proposed a construction mitigation program using about $400,000 to promote businesses that are open via signage but that faced deep criticism and even ridicule from the business community as not going far enough to alleviate woes.

On Wednesday, San Antonio’s City Manager Erik Walsh said the new proposal was born out of responses from that discussion.

“We all empathize with the inconvenience whether it’s in front of your house or a business. We know we need to efficiently complete these projects, and we need to overly communicate and do a better job,” he said.

To be eligible, a business in the construction zone would need to show the loss in revenue, must have been an established business before January 2021 with revenue in 2020, and remain in business at their current location for at least one year after receiving the grant.

The grant money can be used for payroll, rent, utility payments and other business operations. But it cannot be used for acquiring new assets or as distributions to investors.

The 15 construction zones are:

For Michael Brown, owner of Tanks Pizza at North New Braunfels and Hays Street, the grant money was welcome but it won’t go far enough. The $13 million construction project began in November 2021 and is expected to be completed by August of this year. Brown said the lost revenue he expects is upwards of $150,000.

“At this point, something is better than nothing, do I think it’s appropriate for the amount of losses, of course not,” he said.

The loss has led to him being open five days a week instead of all seven, and he has taken out loans and used credit card debt to cover expenses.

“I’ve had to get into conversations of being able to keep staff because they’re nervous and scared if they’re going to even have a job,” he said.

Council was mostly receptive to the proposal with questions on why there is a construction start cutoff point, especially for small businesses in areas that saw projects begin after June 2022. District 3 Councilwoman Phyllis Viagran questioned why projects on Goliad and several other South Side roads were not eligible.

A city staffer responded that since the money is coming from federal COVID-19 grants, the construction project needed to be in the same area as the impact of virus restrictions.

District 8 Councilman Manny Peleaz suggested that funding for business impacts should be included in construction projects. And the city owes it to businesses who have been impacted by these long running projects.

“When somebody asks me, ‘well councilman, isn’t it the role of the city to come to the aid of small businesses?’ I say ‘yes,’ and in capital letters, ‘hell yes,’ when the city is causing some of that pain.”

Walsh said the city would be looking at expanding penalties for contractors whose city projects go on longer than expected, along with offering incentives to contractors who are able to finish ahead of schedule.

The grant application process is expected to open in the next few weeks.