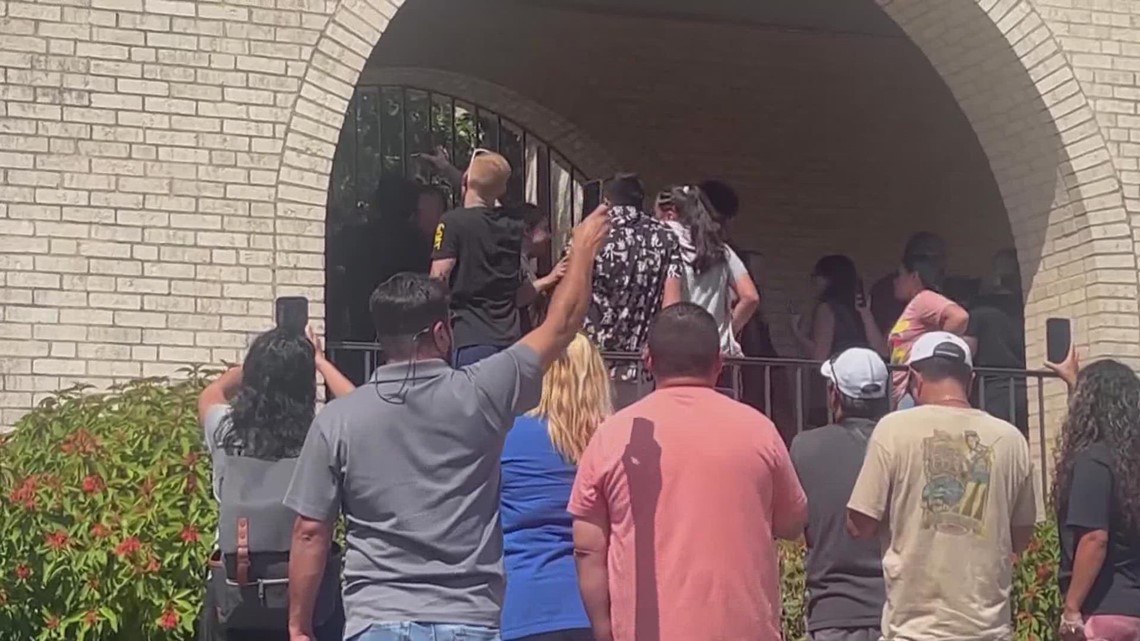 SAISD says they will improve communication with parents after a “discomforting” clash between police and families on Tuesday during a lockdown.

SAN ANTONIO — After reports of an active shooter, that turned out to be false, led parents to swarm Jefferson High School, the San Antonio ISD said it will be improving communications with parents in future lockdowns.

No gun and no evidence of a threat was found, but San Antonio police said school faculty were hurt and a man was restrained after he broke a window trying to get his child out of school.

RELATED: ‘We had an immediate response’: Parents and police rushed to SA high school after lockdown issued

Dr. Jaime Aquino said in a letter Tuesday that a call made to SAPD’s non-emergency number reported a shooting which led to an immediate lockdown of campus.

Nearly 90 officers from the school district and SAPD responded to the scene, but were seemingly outmatched by parents and families who wanted to get their children.

That includes Vanity Parrish’s family. Her sister is a freshman at Jefferson High School and texted her about the lockdown.

“My anxiety was up because that’s my little sister, and we just went through a tragedy not too long ago in Uvalde,” Parrish told KENS 5.

Parrish said her sister went into the library for cover during the lockdown.

“It kind of hurt my heart that she texted me, ‘If anything happens, [I love you].’ I was kind of like texting her and telling her she was going to be okay,” Parrish said her stepdad went to the campus to pick her sister up during the “chaos” that ensued.

A window was broken and blood was seen on the floor nearby on the campus. According to San Antonio police, some parents became “unruly” when students were being released.

A person armed with a knife in his hand broke a window to the school and cut his arm. He was taken to the ground by officers and restrained, according to police.

Taylor Robertson, a professor of criminal justice at Schreiner University in Kerrville said crisis communication is important, and hopes that it can improve in the future.

“We shouldn’t tell people just to stay away from schools. We should tell them where to go. We can have places where people can rally in parking lots and at other facilities, and then as more information comes in, we can provide that to parents and community members,” Robertson said.

Moving forward, the district says it will deploy district staff on campus grounds to inform families on the scene of what’s happening and how parents can reunite with kids.

Each day, Parrish just wants her sister to make it home safe.

“That’s what I told my sister. She was going back to school today, you need to be aware of your surroundings and if anything happens just hide yourself,” Parrish said.