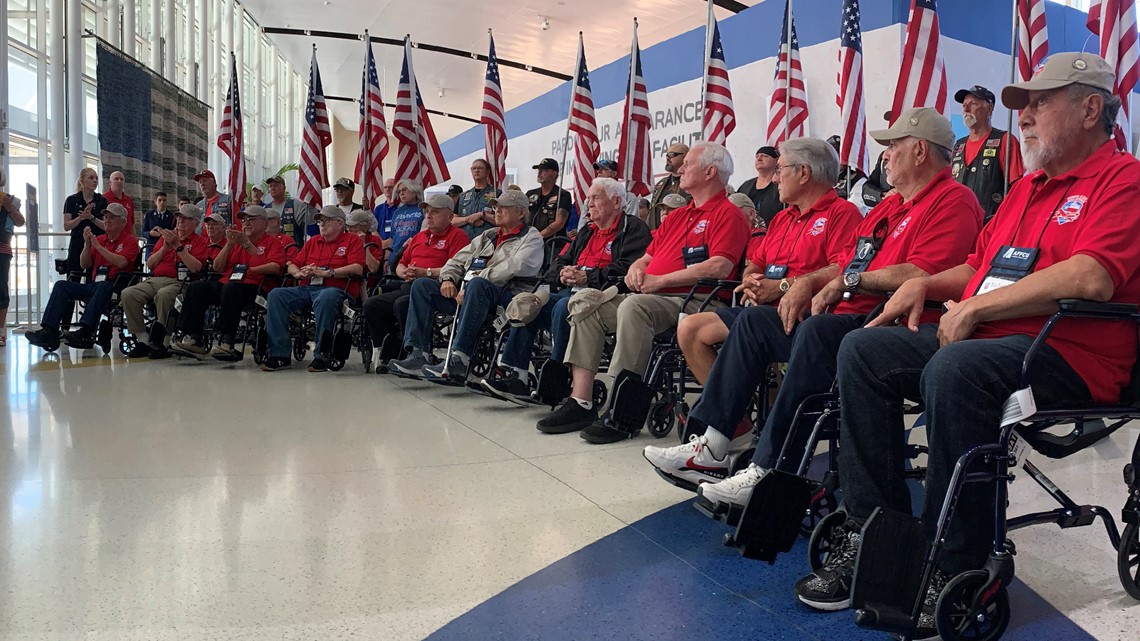 Veterans from the Korean War, Vietnam War, and one veteran from World War II arrived to a warm welcome the San Antonio International Airport.

SAN ANTONIO — Today—veterans from the Vietnam War, Korean War and one World War II vet returned to San Antonio from their Honor Flight.

The all-expense paid trip to Washington DC for these veterans allows them to see the monuments built to honor them for serving their country.

A time of service for one San Antonio-area veteran started at a young age.

“My dad [Bart] went away in the service when he was 16, when he turned 17 he graduated from high school early, back then, to my understanding my grandpa had to sign for him and he was very eager to serve,” Carolina Martinez-Reyna told KENS 5.

Bart Martinez served in the Navy and is a Vietnam veteran who was lucky to be alive.

“He said one time a bomb exploded on his ship and he thought he was going to lose his life,” Bart’s granddaughter Julianna told KENS 5.

Bart was okay—and was able to come home, although his family communicated had to learn via telegram that he wasn’t hurt.

Decades later—he took a trip alongside other veterans to Washington DC.

Tony Mattera is the military liaison for the Honor Flight—making its second trip this year.

He organized the welcome home party at the San Antonio International Airport.

“A lot of Vietnam veterans came home to a world that wasn’t very kind to them. This opportunity, and this whole welcome home party is going to be something they’re never ever going to forget,” Mattera said.

Families and friends formed a line through the airport terminal welcoming these veterans back home. From the color guard and the gifts given—it produced tears for some veterans.

For Martinez it was his first trip to see the monuments in person. Family says he got to see the names of the shipmates who died in the bomb explosion on his ship.

It’s a moment that his family says he will never forget.

‘This trip was extremely special to him, we’re so thankful for this group…he sent me pictures every day, and I would tell my daughter, ‘look, grandpa is smiling,’” Martinez-Reyna said.

To learn more about Honor Flight and the work their organization does, you can visit their website.

Their next flight out of San Antonio will be in spring 2023.