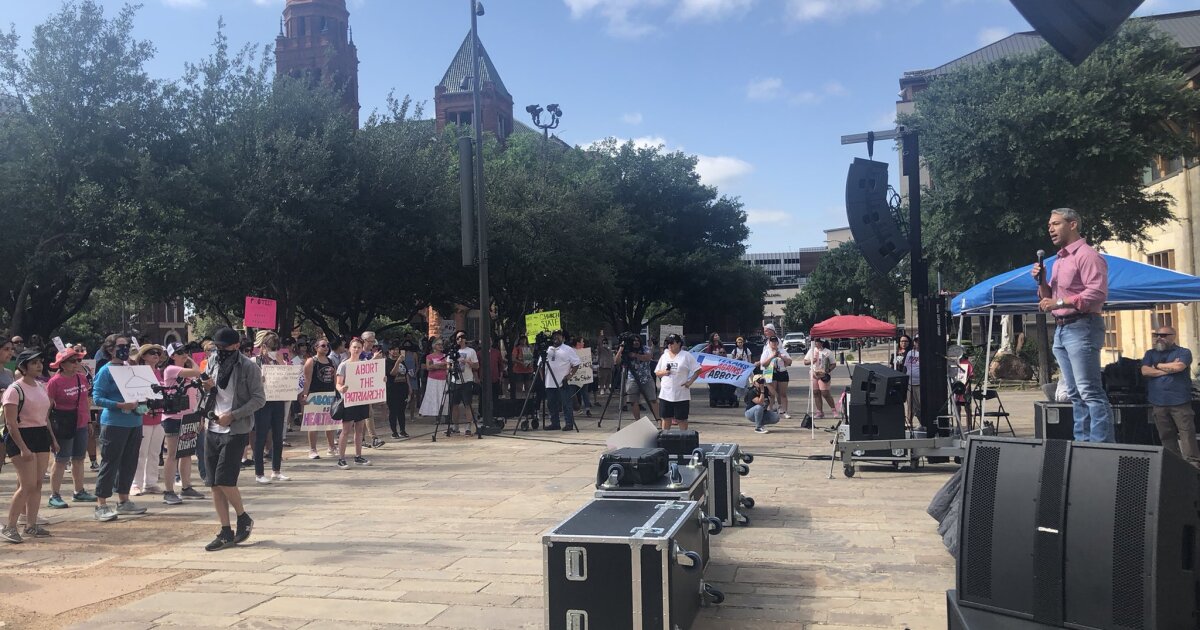 Thousands of abortion rights activists and supporters gathered at the Bexar County Courthouse on Saturday morning for a rally and a march, two weeks after a leaked draft opinion indicated the U.S. Supreme Court will overturn Roe v. Wade.

At the rally, one speaker stood on a stage — the massive San Fernando Cathedral in the background — and asked the crowd, “What do we want?”

The crowd roared back, “Now!”

Many of the signs in the plaza were new. But Martinez originally created her placard for the Women’s March on Washington in 2017.

“Unfortunately, we’ve been able to use it ever since then, about every year, three times a year,” she said. “It’s a very recycled sign.”

Whitney, who gave TPR only her middle name, joined the event dressed as Wonder Woman. She said she was “disgusted” about having to fight for a civil right already granted.

Lauryn Mann, a roller-blading protester with a San Antonio skating group, cried as she shared her fear of abortion becoming criminalized.

Planned Parenthood South Texas hosted the “Bans Off San Antonio” rally and march. “It is necessary to act now, all across the country, not only to demonstrate that people support abortion access, but to show that we won’t back down,” the group explained on its event page.

The crowd heard remarks from Mara Posada with Planned Parenthood South Texas, Director of Women’s March San Antonio Tahira Mammen, officials from the state, city and county, and several others.

Planned Parenthood said in a statement on Friday night that the rally intended to “highlight what is at stake and the disproportionate attacks on reproductive freedoms impacting Black, brown, Indigenous, and other people of color, people with lower incomes, LGBTQ+ people, young people, and people from rural communities.”

San Antonio was not the only city with a “Bans Off” rally. Partner events happened on Saturday across Texas and across the nation, including Washington D.C.

If Roe v. Wade is overturned, a trigger law in Texas would quickly make it a felony for anyone to perform or help provide an abortion in the state.

A similar protest was held at the federal courthouse in early May, soon after the draft court opinion was leaked to the press. Bexar County District Attorney Joe Gonzales stood among the protestors and vowed to never prosecute anyone involved with an abortion in Bexar County.

“While I’m in charge, while I’m at the helm, while I’m making prosecutorial decisions, I’m here to tell the entire community of Bexar County that they not they don’t need to be worrying about whether or not anybody is going to prosecute them for making a decision about their own bodies,” he said.

Jerry Clayton and Bonnie Petrie contributed to this report.