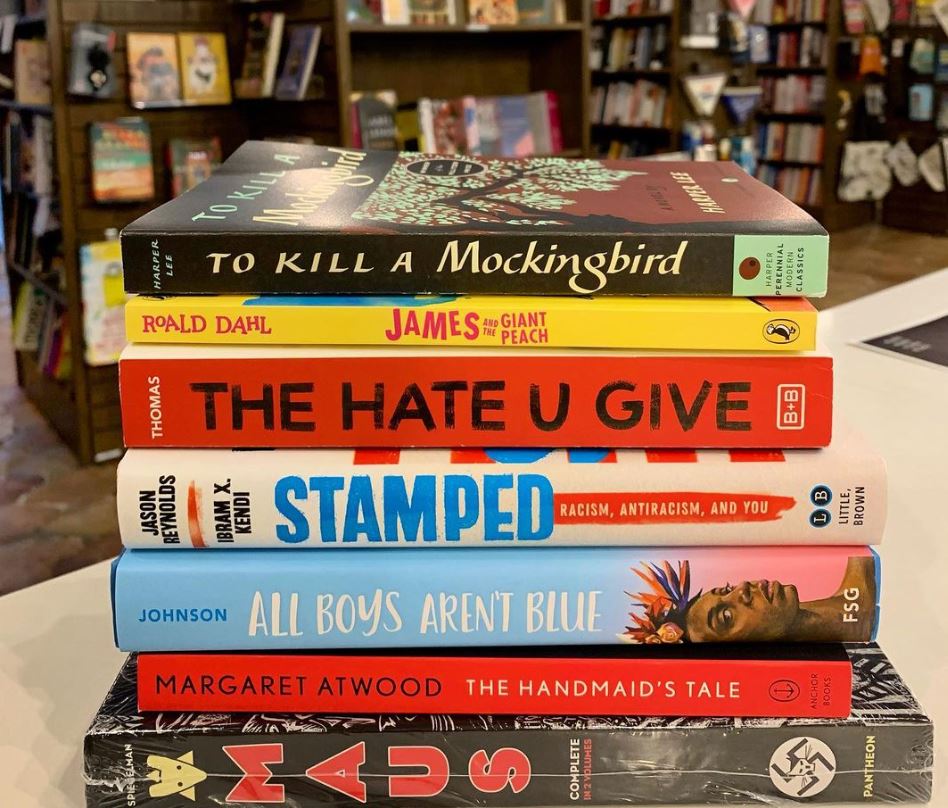 A local bookshop is participating in a national awareness campaign called “Banned Books Week” to celebrate the freedom to read in Texas, which has the more banned books than any other state, according to a recent report from The Texas Tribune. Nowhere Bookshop is also taking it a step further and donating copies of Unspeakable by Carole Boston Weatherford to local school districts.

Nowhere Bookshop founder Jenny Lawson, who’s also a best-selling author, told MySA she believes it’s devastating to see so many books pulled from the shelves of Texas school libraries in the last year. The Texas Tribune reported the state has banned 801 books across 22 school districts, and 174 titles were banned at least twice from July 2021 through June 2022.

“I know many librarians and educators are terrified of what this means and are afraid to speak out against this kind of censorship for fear of losing their jobs,” Lawson said. “Libraries are places to discover new worlds and to challenge who we are … even when that challenge is hard to read. The best kind of book changes you into someone better than you were before, and that kind of change can’t come from reading books that contain what we already know, or think we know.”

Most of the books banned in Texas are titles centering on race, racism, abortion, and LGBTQ representation and issues. The most frequent books removed included Gender Queer: A Memoir by Maia Kobabe, which depicts Kobabe’s journey of gender identity and sexual orientation; The Bluest Eye by Toni Morrison; Roe v. Wade: A Woman’s Choice? by Susan Dudley Gold; Out of Darkness by Ashley Hope Pérez, which follows a love story between a Mexican-American teenage girl and a Black teen boy in 1930s East Texas; and All Boys Aren’t Blue by George M. Johnson, a personal account of growing up Black and queer in Plainfield, New Jersey.

“Even if I’m reading something I disagree with, it still makes me a better person to become more aware of every side and nuance,” Lawson said. “When you look at the books that have been pulled from Texas school libraries recently, the majority focus on race or LGBTQ+ topics. What are we saying to our children with these actions? Those actions speak louder than the books themselves about who we are as a community. What are we saying to our children when we deny them the ability to find themselves in books or to have the ability to learn?”

Banned Books Week, which lasts from September 18-24, is an annual event celebrating the freedom to read. It spotlights current and historical attempts to censor books in libraries and schools. It calls together the book community – librarians, booksellers, publishers, journalists, teachers, and readers of all types – in shared support of the freedom to seek and to express ideas, even those some consider unorthodox or unpopular.

During this #BannedBookWeek, it’s come to our attention that some school libraries in town have refused to add the award-winning and @txla Texas Bluebonnet Award nominee, Unspeakable: The Tulsa Race Massacre by @poetweatherford to their collections. (1/6) pic.twitter.com/RuRragdK7s

Elizabeth Jordan, general manager of Nowhere Bookshop, told MySA the store is donating up to 250 copies of Unspeakable: The Tulsa Race Massacre after receiving a flyer from her son’s NEISD elementary school that showed it blocked out on a list of books for the Texas Bluebonnet Award Program. The school program encourages students to read at least five of the books on the Texas Library Association’s list of books intended for students grades 3 – 6.

NEISD told MySA that it was blocked out because the library didn’t have the book in the school’s library. NEISD said the librarian did send out a new list with all the book listed by the TLA and Unspeakable isn’t blocked out anymore, but a note is made that it’s not available in the library. It reads, “You may find it in SORA (the student reading app) or your public library.”

If you want a copy for your classroom, Jordan said all you need to do is fill out a form, which you can click here to access.