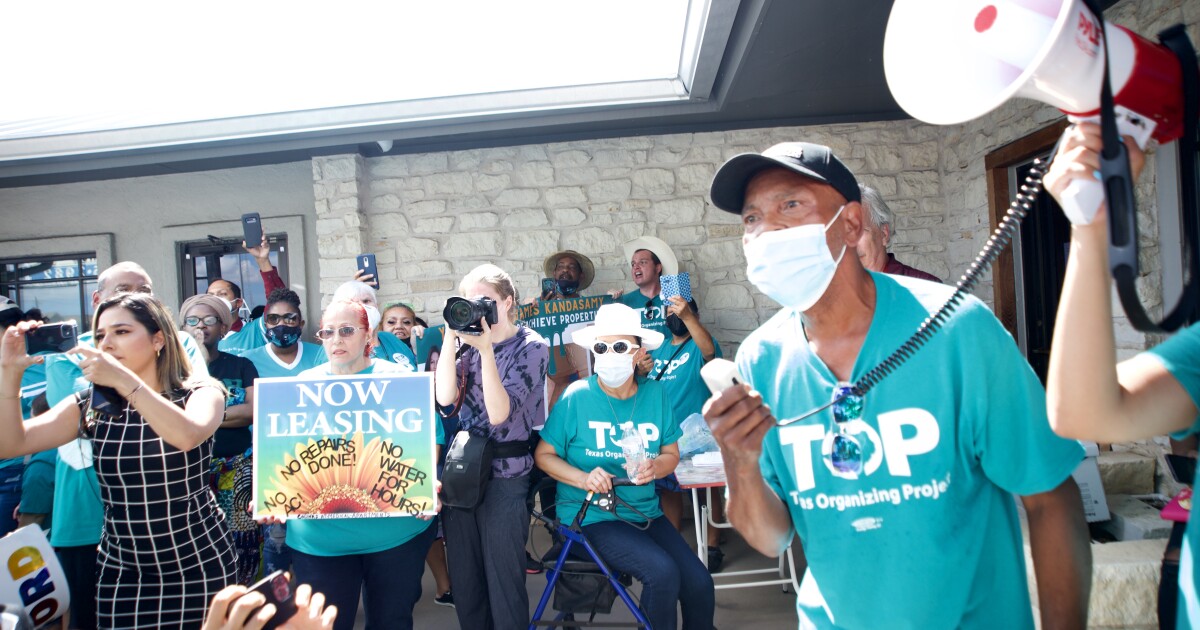 Chanting “no housing, no peace,” dozens of tenants of the Seven Oaks Apartments in San Antonio traveled to Austin Monday to protest outside the office of Achieve Properties. They say the company, which manages the complex, has ignored requests to meet with them and resolve deteriorating conditions there.

Residents have complaints about mold, a lack of hot water, broken air conditioners and pests overrunning the complex.

Some residents have organized a tenant’s union with the help of the Texas Organizing Project. They are also being assisted by Texas Congressional District 35 candidate Greg Casar and San Antonio District 7 City Councilwoman Ana Sandoval.

Meanwhile, Congressman Joaquin Castro says he has contacted local law enforcement about the actions of corporate landlords — The Siegel Group — regarding potential harassment of some residents in their San Antonio properties.

I believe this corporate landlord abuse by @SiegelGroup of Las Vegas against tenants in San Antonio could be criminal. I have reached out to Bexar County law enforcement to make sure they’re aware of the House Committee’s findings. We won’t tolerate this abuse in San Antonio. https://t.co/dY6shOjHrs

Castro pointed to a House subcommittee report that found Siegel and other companies flaunted a moratorium on evictions during the pandemic and used potentially illegal tactics to evict renters.

The Siegel Group has not responded to TPR’s request for comment.

Sandoval, who also joined the group last Friday, told management she showed up at the last code enforcement walk through, and nobody from the property was there.

“There were a lot of things that were being checked on and nobody was there walking through us with code compliance,” she said. “And to me…I was there, I only had code compliance officers.”

A representative for the company said code enforcement doesn’t tell them when they’re coming, only when they’re finished.

Sandoval said the city can’t regulate everything the owner does, but she does expect that the company treats tenants with dignity and respect and honor the lease that they had when they came in.