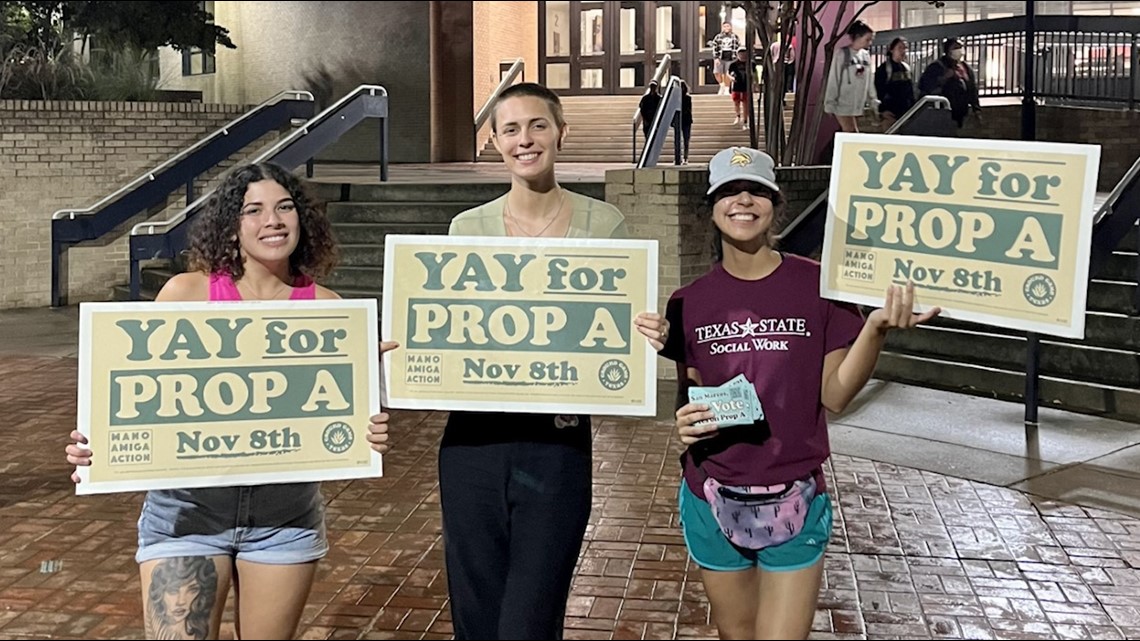 SAN MARCOS, Texas — After amassing a petition of more than 11,000 signatures, nonprofit Mano Amiga Action was able to take a marijuana decriminalization ordinance to the San Marcos City Council.

The council then voted to put the measure on the ballot and let voters decide.

By the time the Nov. 8 election was finished, 81 percent of voters supported the ordinance in a landslide win. More than 15,600 people voted in favor.

On November 17, the ordinance will go into effect for San Marcos and will “decriminalize” possession of less than four ounces of marijuana per city ordinance.

“It was a really thrilling moment for us,” Cross said. “We had dozens of volunteers working seven days a week in the Texas heat. It was such a relief and such an inspiring moment for our city.”

And yet, at the same time, possession of marijuana will continue to be illegal in the city and could potentially get people charged with a crime.

How does that make sense? Keep reading.

The ordinance instructs police to not make arrests for specific state crimes. The beginning of the San Marcos ordinance states:

“(a) San Marcos police officers shall not issue citations or make arrests for Class A or Class B misdemeanor possession of marijuana offenses, except in the limited circumstances described in (b).

It further states that a San Marcos policed officer may seize marijuana from and individual, but they must then right a detailed report and release the individual if possession of marijuana is the sole charge.

What the ordinance means for you

First, the ordinance only applies to San Marcos Police officers. It does not apply to any other law enforcement acting in or outside the City of San Marcos.

This means an individual could still be arrested by a Hays County sheriff deputy, a DPS state trooper, a Texas State University police officer, the Texas Wildlife Commission, or any other agency that may be in the area.

Second, the ordinance only applies to possession of marijuana of four ounces or less.  According to Texas law “a Class A misdemeanor” possession charge is for four ounces or less of the controlled substance, which is the highest charge listed that officers cannot arrest for in the ordinance. Possessing more than that amount could be a felony and would still get a person arrested. Possessing marijuana with “intent to deliver” to another individual can also be a felony so distributing or selling marijuana is likely not protected.

Third, if a person’s possession of marijuana case reached the Hays County District Attorneys office, the DA would still have the option to press charges regardless of where the case came from. This would be true even if the case was sent by the San Marcos Police Department in violation of the ordinance.

Hays County District Attorney Wes Mau told Kens 5 Wednesday simply being inside city limits is not a guarantee that using marijuana will be safe.

“Any of those cases, which could happen in the city limits of San Marcos could be presented to the DA’s office and the DA’s office would handle them in the way as any other criminal offense.

Mau also told Kens 5 that a district attorney did have the option to decide not to prosecute such cases. At the same time, Mau did not seek re-election and voters have now elected Kelly Higgins who is supportive of the decriminalization of marijuana movement.

In fact, Higgins said the following on Facebook, on September 22:

“I have said I will not use the resources of Hays County to pursue charges against simple possession of marijuana in Hays County. It costs us ten million dollars a year and gives us nothing but a charade of being tough. Add to that the fact that 70% of Texans, and an even higher percentage of Hays County residents, think marijuana prohibition is just plain wrong. Every judge knows it. Every prosecutor knows it. We have all known it for decades. And now our young people have made it plain they know it too.”

if Higgins does not pursue such charges, Hays county residents would have more freedom to use small amounts of marijuana with less concern. Still, residents would continue to risk prosecution with future officials unless the Texas Legislature changes state law regarding the use of marijuana.